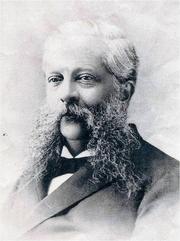 Charles Cullis **(1833-1892) *was a Boston homeopath who ‘… *was on the Board of the Massachusetts Homœopathic Medical Society, which would establish a New England Homœopathic Hospital and eventually the New England Homœopathic College. This College is now known as the Boston University School of Medicine… *(with thanks to http://healingandrevival.com/BioCCullis.htm)‘*

From http://healingandrevival.com/BioCCullis.htm ‘… Charles Cullis was born on March 7, 1833 in Cambridge, Massachusetts. He was the son of English immigrants… He was in poor health for most of his early life… His memories of childhood included constant sickness…

His family attempted to put him in school but his health was so bad they eventually gave up. At the age of 16 he started working in a dry goods business… When he was 19 his health collapsed once more and he had to stop working. He lost his voice and could only speak in whispers. Cullis assumed that with rest that his health would improve and he could return to work, but that door was closed forever.

*Dr Orin S. Sanders, a physician friend, opened his library to Cullis and began to take him on rounds with him. Dr Landers suggested that Cullis study medicine… Although he did not have the money to complete the required coursework God opened the doors for him every step of the way. Later he was to see God’s hand clearly in the process, but it was hidden from him at the time. Cullis came under conviction to know God better… *

Over the next several years Cullis added a worker’s home, a cancer home, a spinal home, an orphanage, a mission, a chapel, a Faith Training College, and supported the Beacon Hill Church on Bowdoin Street in Boston. The Willard Tract repository was also created for printed gospel material. Cullis started two major regular publications. The first was a yearly “Consumptives Home Report”… Secondly he started monthly publication called “Times of Refreshing”. Faith was stretched to the limits, over and over, as funds would dwindle to nothing, and then God would miraculously provide. Cullis also supported holiness and temperance works, often speaking at Women’s Chrisitian Temperance Union (WCTU) Meetings…

_In the mid-1880’s Cullis began holding “Faith Conventions” in Massachusetts, Maine, and New Hampshire… __Cullis purchased land in Intervale Park, New Hampshire so he could hold conventions of his own that did not have to work around other ministries’ schedules. In 1883 Cullis wrote a book to promote his new convention site called “Intervale Park.” He brought in guest speakers, who had healing ministries, from all over the US and Europe. The conventions attracted a lot of media coverage, both positive and negative. The conventions would end with a general healing service led by Dr. Cullis, who prayed over hundreds people, in healing lines. _

Through Cullis’ direct influence, by the late 1880’s, there were over 25 “faith homes” in the US being run by various ministries. The majority of these were associated with the Christian and Missionary Alliance which Cullis’ teaching had so strongly impacted. __Another hymnal was produced called “Songs of Victory” in 1889, probably in support of his conventions. Finally in 1892 a series of sermons were published called “Tuesday Afternoon Talks”.

By any standard the work that Cullis was handling was enormous. From 1864 to the 1890s the Consumptive Home had taken care of 2000 critically ill patients, the vast majority of which had been brought to a saving knowledge of Christ. He was constantly meeting with supporters, writing, teaching, publishing, visiting the poor, handing out tracts, and holding summer conventions. His life of prayer was central to his vision and ministry. In 1892 Dr. Charles Cullis suddenly collapsed. He died on April 18th at the age of 59. The Consumptive’s Home continued to operate for another 25 years, eventually handling over 4000 patients. Still Cullis’ lasting impact was his teaching on having faith in God, and the revelation that we could believe God for our salvation, provision, and healing…’ With thanks to http://healingandrevival.com/BioCCullis.htm