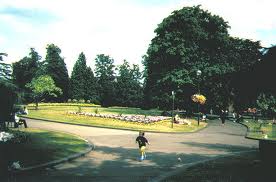 ‘… When it was decided to expand or build a new _[homeopathic] hospital, Coles Child, Lord of the Manor, presented Bromley with The White Hart Field in 1897, a section of which was given for the new hospital…’_

From http://www.londongardensonline.org.uk/gardens-online-record.asp?ID=BRO061  (See also http://www.ideal-homes.org.uk/bromley/assets/galleries/bromley/hospital) Queen’s Gardens are set in the shade of The Glades Shopping Centre that opened in 1991 in the centre of Bromley, with Kentish Way a major thoroughfare to the east. By the C19th the site was known as The White Hart Field and shown as such on the 1st edition OS map of 1871; it was used for public recreation and sports, and was named after the Inn of that name that stood to the side of the site. County cricket was played here until 1847.

Phillips Homeopathic Hospital had opened in 1900, was enlarged further in 1907, but it was bombed in WWII by a direct hit and although it temporarily became a home for homeless people, escalating costs meant that it was eventually demolished in 1951. From the outset patients had used the adjacent recreation ground during convalescence. When The Glades Shopping Centre was built, the site was reduced somewhat in size. The naming of The Glades, chosen through a competition in which local residents participated, reflected the leafy, green image of the borough in which Queen’s Gardens plays a part. Today the gardens have formal beds of annual bedding plants, tarmac paths, seats and a number of mature and semi-mature ornamental trees. The copper beech are especially fine…’

From http://www.thepeerage.com/p21887.htm ‘… was the son of Coles William John Child and Elizabeth Letitia Jones. He married Eliza Caroline Barton, daughter of Richard Bolton Barton, on 5 August 1885. He died on 29 January 1929 at age 66. He was Lord of the Manors of Bromley, East Farleigh and East Peckham. He gained the rank of Honorary Colonel in the service of the 3rd Volunteer Battalion, Royal West Kent Regiment. He held the office of Deputy Lieutenant (D.L.) of Kent. He held the office of Justice of the Peace (J.P.) for Kent. He was created 1st Baronet Child, of Bromley Palace, Bromley, Kent [U.K.] on 16 September 1919.