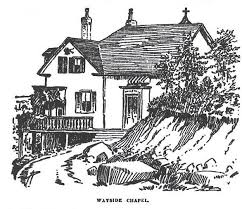 Elizabeth M Bruce (1830-1911) was an American Universalist Pastor and writer, Secretary at the Woman Preachers’ Convention in Boston in May 1873_, she was a colleague of Julia Ward Howe, _this astonishing woman fought for women’s education for many years. _The Universalist Register _estimated that ultimately more than 80,000 people had attended one of her services

From http://readseries.com/auth-bc/brucebio.html ‘… Another author whose life merits more attention than it’s previously received is Elizabeth M. Bruce. Almost no information is available about her early years other than that she was born in New York in September 1830 to a man from Vermont and his Massachusetts-born wife. The family name may have been Hurd. Bruce’s date of marriage and husband’s full name remain mysteries. Her first identifiable book, Our Children’s God: A Book of Stories for the Young, appeared in 1859 as by “Mrs. E. M. Bruce,” the name used on her subsequent book publications. Five more titles, issued as the initial volumes in Life Stories for Children, were published in 1863 by the Boston firm of Tompkins and Company. This appears to be a publisher-created series, for the sixth and final book was by Sarah Carter Edgarton Mayo (1819-1848). Nonetheless, at least two of Bruce’s volumes have a narrative connection, for The Sun-Beam is a sequel to the preceding book, Georgy King and His Three Little Pets. A second series, Happy Heart, was published in 1874. In addition to her juvenile fiction, Bruce also wrote works for adults, including A Thousand a Year (1866), about the financial trials of a pastor’s family in the city. Bruce was well qualified to write about the tribulations of ministers, for she was herself a pastor in the Universalist Church — and more: she had not only built her church, the Wayside Chapel in Malden, Massachusetts, but “was also its trustee, janitor, choir, and preacher.” Actively involved in the church and women’s issues, she attended the first Woman Preachers’ Convention in Boston in May 1873, where she was elected secretary of the organization. (Julia Ward Howe was its president; Olympia Brown and Mary H. Graves, the two vice-presidents.) In their biography of Howe, her daughters Laura E. Richards and Maud Howe Elliott mention that “After the formal conference, [Howe] welcomed the members at her own house, talked with them, and heard of their doings. Her eyes kindled as she heard of the Wayside Chapel … heard how for thirteen years [Bruce] had rung the bell every evening for vesper service, and had never lacked a congregation.” A later account noted that Bruce offered daily services for more than twenty years, during which time “at least 80,000 people attended.” In fall 1873, Bruce was present — and quite vocal — at the Massachusetts Universalist Convention, when the topic of admitting women to Tufts University was raised. One report notes she “offered a preamble and four resolutions calling for forthright action … Her wording was spiced with a certain amount of righteous indignation.” Although “All of Mrs. Bruce’s efforts were tabled by the Convention, … it was voted that they be considered again at the next meeting”, but they were ultimately quashed by the university’s president. However, according a history of the college in its online magazine, “When Tufts finally went coed, in the 1890s, it was thanks to the pressure exerted by Universalist women such as Mrs. E. M. Bruce … who for several years sponsored resolutions in the General Convention … directing the College to do the right thing.” Were that not enough, about late 1874, Bruce became co-editor of the Ladies’ Repository, a responsibility she shared with Mrs. Henriette A. Bingham, and “prepared” its final two issues when Bingham was ill. In 1875, she assumed the editorship of The Myrtle, a Unitarian Sunday-School magazine for children, a position she held for more than thirty years, all the while maintaining her pastorate in Massachusetts. She also continued to write children’s books, and her six-volume Helpful Hand stories appeared in 1880. Mr. Bruce’s whereabouts during these years are unknown. The 1880 census — the earliest in which Elizabeth Bruce has been located — shows her living alone. This situation suggests that like many other women writers of the era, she may have turned to her pen to support herself, and that Mr. Bruce may have been absent — due to a separation or death — as early as the 1860s. In the 1900 census, Mrs. Bruce was still living alone and still listing her occupation as clergy. That census was the first to ask for additional information about marriage history and childbirth: in Bruce’s entry, the space reserved for number of years married has been left blank, but the census taker recorded that she had had no children. Although Bruce ceased editing The Myrtle in 1905, she apparently continued to preach, for the 1910 census again shows her as minister in Massachusetts. She died in Massachusetts 20 August 1911…’

See also http://readseries.com/auth-bc/HomeAShrine.html ‘… article, published in the _Boston Globe on October 14, 1894, offers not only a look at Mrs. Bruce’s unusual home but also her equally unusual ministry. Moreover, although biographical details are slight, it’s clear that that Bruce’s life and family influenced the decoration of her home and chapel…’_