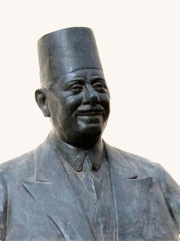 From http://www.coptic-cairo.com/museum/about/page43/page43.html Marcus Simaika Pasha (1864-1944) ’… *Born in 1864, growing up in Cairo and educated at the Patriarchal School founded by Pope Kyrillos IV, known as “The Father of Reform”, Simaika made his career in the Egyptian State Railways administration. Fortunately, Alfred J. Butler’s book soon awakened him to his enduring passion – Coptic antiquities. *

*Active as a reformer in the Coptic communal Council (al-Majlis al-Milli) in the 1890s, Simaika had moderated his views sufficiently by 1906 for Pope Kyrillos V to approve him for a seat on the Committee for Conservation of Monuments of Arab Art. *

*The formative period of Simaika’s long directorship of the Coptic Museum stretched from 1908 to 1931. The Pope provided the space in rooms adjoining Al-Muallaqa Church and lent his authority to the collection of objects from churches and monasteries from Rosetta to Khartoum. * *The budget for operation and acquisitions however, came from donations - mostly from Coptic lay notables - and a small state subsidy. *

_Despite a visit paid by the American ex-president Theodore Roosevelt in 1910, the tourist industry had hardly noticed the fledgling museum by World War I. In 1920, a visit by Sultan Fouad called attention to the museum. __The king liked to bring visiting European dignitaries by, a means of displaying his solicitude for his Christian subjects and projecting an image of cultural progress under his enlightened leadership. __He insisted however, that the museum should be a national, not merely a Coptic communal, institution. The Church remained reluctant, but in 1931 Kyrillos’s successor Pope Yuannis XIX agreed to place the Coptic Museum under the Department of Antiquities, with careful protection of Church endowments (Coptic Waqf) and other rights. _

*Simaika could now arrange for the transfer of Coptic antiquities from the Egyptian Museum to the Coptic Museum. He also obtained funds for a major new wing, which was inaugurated in 1947 after his death. He was duly honored posthumously with the bust that welcomes visitors to the museum and a plaque in Arabic, Coptic, and English commemorating him and King Farouk’s patronage. *

*Simaika’s Coptic Museum helped awaken both Copts and Muslims to the critical link the Coptic Church and community had played in linking ancient Egypt on the one hand to Islamic and modern Egypt on the other. The museum continues today as a critical landmark for both Coptic communal and Egyptian national consciousness and identity. Dr. Donald Malcolm Reid Professor Emeritus, Georgia State University*…’