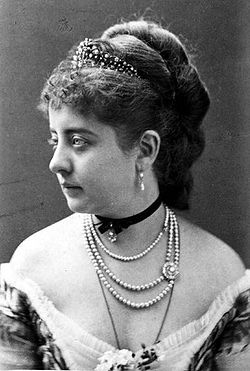 From http://en.wikipedia.org/wiki/Ouida ’… *Maria Louise Ramé was born at Bury St. Edmunds, England. Her mother was English and her father was from Guernsey; his first language was French. She derived her pen name from her own childish pronunciation of her given name “Louise”. Her opinion of her birthplace fluctuated; she wrote: ‘That clean, quiet antiquated town, that always puts me in the mind of an old maid dressed for a party; that lowest and dreariest of Boroughs, where the streets are as full of grass as an acre of pasture land. Why, the inhabitants are driven to ringing their own doorbells lest they rust from lack of use’. *

_She moved into the Langham Hotel, London in 1867. There she wrote in bed, by candlelight, with the curtains drawn and surrounded by purple flowers. She ran up huge hotel and florists bills, and commanded soirees that included soldiers, politicians, literary lights (including Oscar Wilde, Algernon Swinburne, Robert Browning and Wilkie Collins), and artists (including John Millais). Many of her stories and characters were based upon people she invited to her salons at The Langham. Ouida was described by William Allingham in his diary of 1872 as of short stature, with a “sinister, clever face” and with a “voice like a carving knife.” _

_For many years Ouida lived in London, but about 1871 she moved to Italy. In 1874, she settled permanently with her mother in Florence, and there long pursued her work as a novelist. At first she rented an ‘apartment’ at the Palazzo Vagnonville. Later she removed to the Villa Farinola at Scandicci, south of Bellosguardo, three miles from Florence, where she lived in great style, entertained largely, collected objets d’art, dressed expensively but not tastefully, drove good horses, and kept many dogs, to which she was deeply attached. _

She declared that she never received from her publishers more than £1600. for any one novel, but that she found America ‘a mine of wealth.’ In ‘The Massarenes’ (1897) she gave a lurid picture of the parvenu millionaire in smart London society. This book was greatly prized by Ouida, but it failed to sustain her popularity, which waned after 1890. Thenceforth she chiefly wrote for the leading magazines essays on social questions or literary criticisms, which were not remunerative. As before, she used her locations as inspiration for the setting and characters in her novels. The villa was a model for that portrayed in her novel, Pascarel (1873). The British and American colony in Florence was satirised in her novel, Friendship (1878).

Ouida considered herself a serious artist. She was inspired by Byron in particular, and was interested in other artists of all kinds. Sympathetic descriptions of tragic painters and singers occurred in her later novels. Her work often combines romanticism with social criticism. In her novel, Puck, a talking dog narrates his views on society. Views and Opinions includes essays in her own voice on a variety of social topics.

_Although successful, she did not manage her money well. A civil list pension of £150 a year was offered to her by the prime minister, Henry Campbell Bannennan, on the application of Alfred Austin, George Wyndham, and Walburga, Lady Paget, which she reluctantly accepted after request by her friend, Lady Howard of Glossop, on 16 July 1906. _

She continued to live in Italy until her death on 25 January 1908, at 70 Via Zanardelli, Viareggio, of pneumonia She is buried in the English Cemetery in Bagni di Lucca, Italy…’