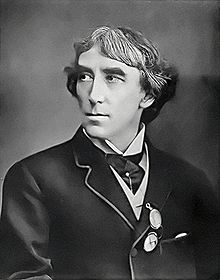 Henry Irving **(1838-1905) **‘… born John Henry Brodribb, was an English stage actor in the Victorian era, known as an actor-manager because he took complete responsibility (supervision of sets, lighting, direction, casting, as well as playing the leading roles) for season after season at the Lyceum Theatre, establishing himself and his company as representative of English classical theatre. He was the first actor to be awarded a knighthood. Irving is thought to have been the inspiration for the title character in Bram Stoker’s 1897 novel Dracula…’

Henry Irving was a patient of Emmanuel de Marney Baruch (?-?),  homeopathic physician to the famous (Neil Gould, Victor Herbert: A Theatrical Life, (Fordham Univ Press, 1 Aug 2009). Page 509), and he was possibly a patient of James John Garth Wilkinson when he was in London?

From http://en.wikipedia.org/wiki/Henry_Irving ’… Irving was born to a working-class family in Keinton Mandeville in the county of Somerset. W.H. Davies, the celebrated poet, was a cousin. Irving spent his childhood living with his aunt, Mrs Penberthy, at Halsetown in Cornwall. He competed in a recitation contest at a local Methodist chapel where he was beaten by William Curnow, later the editor of the The Sydney Morning Herald. He attended City Commercial School for two years before going to work in the office of a firm of lawyers at the age of 13.

After seeing Samuel Phelps play Hamlet soon after this, Irving sought out lessons, letters of introduction, and, finally, work in a theatre in Sunderland in 1856. He married Florence O’Callaghan on 15 July 1869 at St. Marylebone, London. Irving labored against great odds from 1856 till his 1871 success in The Bells in London set him apart from all the rest.

His personal life took second place to his professional life. On opening night of The Bells, 25 November 1871, Irving’s wife, Florence criticised his profession: “Are you going on making a fool of yourself like this all your life?” (She was then pregnant with their second boy, Laurence.) Irving got out from their carriage at Hyde Park Corner, walked off into the night and chose never to see her again. He maintained a discreet distance from his children as well, but became closer to them as they grew older.

His elder son, Harry Brodribb Irving, usually known as “H B Irving”, became a famous actor and later a theatre manager. His younger son, Laurence Irving, became a dramatist and later drowned, with his wife, in the sinking of the Empress of Ireland. Dorothea Baird married his son H B and the couple had a son, Laurence Irving (1897–1988), who became a well known Hollywood art director and a biographer for his grandfather.

Florence Irving never divorced Irving, and claimed herself “Lady Irving” once he had been knighted. Irving never remarried. In November 1882 Irving became a Freemason, being initiated into the prestigious Jerusalem Lodge No 197 in London. He went on to take over the management of the Lyceum Theatre and brought the actress Ellen Terry into partnership with him… Irving might be said to have found his family in his professional company, which included his ardent supporter and manager Bram Stoker and Ellen Terry’s two illegitimate children, Teddy and Edy. Whether Irving’s long, spectacularly successful relationship with his leading lady Ellen Terry was romantic as well as professional has been the subject of much historical speculation. Most of their correspondence was lost or burned by her descendants… George Bernard Shaw, a theatre critic at the time who was jealous of Irving’s connection to Ellen Terry (whom Shaw himself wanted in his own plays), conceded Irving’s genius after Irving died…

After a few years schooling while living at Halsetown, near St Ives, Cornwall, Irving became a clerk to a firm of East India merchants in London, but he soon gave up a commercial career and started as an actor. On 29 September 1856 he made his first appearance at Sunderland as Gaston, Duke of Orleans, in Edward Bulwer Lytton’s play, Richelieu, billed as Henry Irving. This name he eventually assumed by royal licence.

For 10 years, he went through an arduous training in various stock companies in Scotland and the north of England, acting in more than 500 parts. He gained recognition by degrees, and in 1866 he was engaged by Ruth Herbert as her leading man and sometime stage director at the St. James’s Theatre, London, where her first played Doricourt in The Belle’s Stratagem. One piece that he directed there was W. S. Gilbert’s first successful solo play, Dulcamara, or the Little Duck and the Great Quack (1866) A year later he joined the company of the newly opened Queen’s Theatre, where he acted with Charles Wyndham, J. L. Toole, Lionel Brough, John Clayton, Mr. and Mrs. Alfred Wigan, Ellen Terry and Nellie Farren.

This was followed by short engagements at the Haymarket Theatre, Drury Lane, and the Gaiety Theatre. At last he made his first conspicuous success as Digby Grant in James Albery’s Two Roses, which was produced at the Vaudeville Theatre on 4 June 1870 and ran for a very successful 300 nights. In 1871, Irving began his association with the Lyceum Theatre by an engagement under Bateman’s management. The fortunes of the house were at a low ebb when the tide was turned by Irving’s sudden success as Mathias in The Bells, a version of Erckmann-Chatrian’s Le Juif polonais by Leopold Lewis, a property which Irving had found for himself. The play ran for 150 nights, established Irving at the forefront of the British drama, and it would prove a popular vehicle for Irving for the rest of his professional life.

With Bateman, Irving was seen in W. G. Wills’ Charles I and_Eugene Aram_, in Richelieu, and in 1874 in Hamlet. The unconventionality of this last performance, during a run of 200 nights, aroused keen discussion and singled him out as the most interesting English actor of his day. In 1875, again with Bateman, he was seen as the title character in Macbeth; in 1876 as Othello, and as Philip in Alfred Lord Tennyson’s Queen Mary; in 1877 in Richard III; and in The Lyons Mail.

It is in this time that he became lifelong friends with Bram Stoker, who praised him in his review of Hamlet and thereafter joined Irving as the manager for the company. In 1878, Irving entered into a partnership with the actress Ellen Terry and re-opened the Lyceum under his own management. With Terry as Ophelia and Portia, he revived Hamlet and produced The Merchant of Venice (1879). His Shylock was as much discussed as his Hamlet had been, the dignity with which he invested the vengeful Jewish merchant marking a departure from the traditional interpretation of the role. After the production of Alfred Lord Tennyson’s The Cup and revivals of Othello (in which Irving played Iago to Edwin Thomas Booth’s title character) and Romeo and Juliet, there began a period at the Lyceum which had a potent effect on the English stage. Much Ado about Nothing (1882) was followed by Twelfth Night (1884); an adaptation of Goldsmith’s Vicar of Wakefield by W. G. Wills (1885); Faust(1886); Macbeth (1888, with incidental music by Arthur Sullivan); The Dead Heart, by Watts Phillips (1889); Ravenswood by Herman, and Merivales’ dramatic version of Scott’s Bride of Lammermoor (1890).

Portrayals in 1892 of the characters of Wolsey in Henry VIII and of the title character in King Lear were followed in 1893 by a performance of Becket in Alfred Lord Tennyson’s play of the same name. During these years, too, Irving, with the whole Lyceum company, paid several successful visits to the United States and Canada, which were repeated in succeeding years. As Terry grew older, there seemed to be fewer opportunities for her in his company, and that was one of the reasons why she eventually left, moving on into less steady but nonetheless beloved work on the stage, including solo performances of Shakespeare’s women.

The chief remaining novelties at the Lyceum, during Irving’s term as sole manager (the theatre passed, at the beginning of 1899, into the hands of a limited liability company) were Arthur Conan Doyle’s Waterloo (1894); J. Comyns Carr’s King Arthur in 1895; Cymbeline, in which Irving played Iachimo, in 1896; Sardou’s Madame Sans-Gene in 1897; and Peter the Great, a play by Laurence Irving, the actor’s second son, in 1898.

In 1898 Irving was Rede Lecturer at the University of Cambridge. The new regime at the Lyceum was signalled by the production of Sardou’s Robespierre in 1899, in which Irving reappeared after a serious illness, and in 1901 by an elaborate revival of Coriolanus. Irving’s only subsequent production in London was as Sardou’s Dante (1903) at the Drury Lane.

Irving died shortly after suffering a stroke during a performance while on tour in Bradford on 13 October 1905, aged 67… He was brought to the lobby of the Midland Hotel, where he died. The chair that he was sitting in when he died is now at the Garrick Club. He was cremated and his ashes buried in Westminster Abbey, thereby becoming the first person ever to be cremated prior to interment at Westminster. There is a statue of him near the National Portrait Gallery in London. That statue, as well as the influence of Irving himself, plays an important part in the Robertson Davies novel World of Wonders. The Irving Memorial Garden was opened on 19 July 1951 by Laurence Olivier.