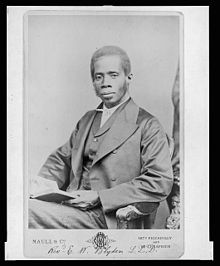 Edward Wilmott Blyden (1832-1912) ‘… was an Americo-Liberian educator, writer, diplomat, and politician primarily in Liberia. He also taught for five years in Sierra Leone, and his writings were influential in both countries…’

As a result, Edward Wilmott Blyden gave a ‘… very remarkable speech…’ to the Annual General Meeting of the Swedenborg Society (Richard Lines, A History of the Swedenborg Society 1810-2010, (www.lulu.com, 2012). Page 75) in 1892, and ‘… spoke _eloquently about the campaign for the abolition of the slave trade and the part played in that campaign by early Swedenborgians, and then about Islam in Africa and the role Swedenborg’s writings could play in furthering relations between Christians and Muslims…’ _

Reverend C C Hoffman (?-?), the leader of the Domestic and Foreign Mission Society of the Episcopal Church of the United States in Liberia was reputed to be a brother in law (James L. Sims, George L. Seymour, Benjamin J. K. Anderson, African-American Exploration in West Africa: Four Nineteenth-Century Diaries, (Blyden to William Coppinger 28.2.1891 in Lynch 1978, 420) (Indiana University Press, 2003). Page 27) of James John Garth Wilkinson. Reverend C C Hoffman had travelled to the interior of Liberia in 1861, taking Emanuel Swedenborg with him all the way.

From http://en.wikipedia.org/wiki/Edward_Wilmot_Blyden ‘… _Blyden was born on 3 August 1832 in St Thomas, Danish West Indies (now known as the U.S. Virgin Islands), to Free Black parents who were of the Igbo from present-day Nigeria. _

According to the historian Hollis R. Lynch, in 1845 Blyden met the Reverend John P. Knox, a white American, who became pastor of the St. Thomas Protestant Dutch Reformed Church. Blyden and his family lived near the church, and Knox was impressed with the studious, intelligent boy. Knox became his mentor, encouraging Blyden’s considerable aptitude for oratory and literature. Mainly because of his close association with Knox, the young Blyden decided to become a minister, which his parents encouraged.

*In May 1850, Blyden, accompanied by Reverend Knox’s wife, went to the United States to enroll in Rutgers Theological College, Knox’s alma mater. He was refused admission due to his race. Efforts to enroll him in two other theological colleges also failed. Knox encouraged Blyden to go to Liberia and the colony set up by the American Colonization Society (ACS), where he thought Blyden would be able to use his talents. *

Later that year, Blyden arrived in Liberia and soon became deeply involved in its development. Blyden married Sarah Yates, an Americo-Liberian from the prominent Yates family. She was the niece of the Liberian vice president, Hilary Yates. She and Blyden had three children together.

Later while living in Freetown, Sierra Leone, Blyden had a long-term relationship with Anna Erskine, an African American from Louisiana. She was a granddaughter of James Spriggs-Payne, who was elected twice as the President of Liberia. Erskine and Blyden had five children together, and his direct descendants in Sierra Leone are from this union. They have been considered part of the Krio population. Some Blyden descendants continue to live in Freetown, among them Sylvia Blyden, publisher of the Awareness Times.

From 1855 to 1856, Blyden edited the Liberia Herald and wrote the column “A Voice From Bleeding Africa”. He also spent time in other British colonies in West Africa, particularly Nigeria and Sierra Leone, writing for early newspapers in both colonies. He was also serving editor at “The Negro” and “The African World”. He maintained ties with the American Colonization Society and published in their journal, African Depository and Colonial Journal.

In 1861, Blyden became professor of Greek and Latin at Liberia College, and within twenty years he had become president of the college.

_As a diplomat, Blyden served as an ambassador for Liberia to Britain and France. He also traveled to the United States, where he spoke to major black congregations about his work in Africa. Blyden believed that Black Americans could end their suffering of racial discrimination by returning to Africa and helping develop it. He was criticized by African Americans who did not identify with Africa. _

In addition to holding many positions of leadership in politics and diplomacy, Blyden taught classics at Liberia College (1862–71). He also served as its president (1880–84), leading the college through a period of expansion. He contested the 1885 presidential election for the Republican Party, but lost to incumbent Hilary R. W. Johnson.

*From 1901–06, Blyden directed the education of Muslims at an institution in Sierra Leone, where he lived in Freetown. This is when he had his relationship and several children with Anna Erskine. *

As a writer, Blyden is regarded widely as the “father of Pan-Africanism”. His major work, Christianity, Islam and the Negro Race (1887), promoted the idea that practicing Islam was more unifying and fulfilling for Africans than Christianity. He argues that the latter was introduced later, mostly by European colonizers. He believed it had a demoralizing effect, although he continued to be a Christian. He thought Islam was more authentically African. His book was controversial in Great Britain, both for its subject and because many people at first did not believe that a black African had written it. In later printings, Blyden included his photograph as the frontispiece.

Blyden wrote: __“‘Let us do away with the sentiment of Race. Let us do away with out African personality and be lost, if possible, in another Race.’ This is as wise or as philosophical as to say, let us do away with gravitation, with heat and cold and sunshine and rain. Of course, the Race in which these persons would be absorbed is the dominant race, before which, in cringing self-surrender and ignoble self-suppression they lie in prostrate admiration.”

Mainly due to his religious affiliations, Blyden supported the creation of a Jewish state in Israel and praised Theodore Herzl as the creator of “that marvelous movement called Zionism.” This, of course, is in stark contrast to most Pan-Africanism, such as that of Stokely Carmichael, the Black Panther Party or Malcolm X, who were outspoken advocates of the Palestinian people…’