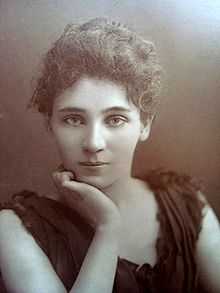 From http://en.wikipedia.org/wiki/Elizabeth_Robins ‘… _Elizabeth Robins, the first child of Charles Robins and Hannah Crow, and was born in Louisville, Kentucky. After financial difficulties, her father left for Colorado, leaving the children in the care of Hannah. When Hannah was committed to an insane asylum, Elizabeth and the other children were sent to live with her grandmother in Zanesville, Ohio, where she was educated. It would be her grandmother who armed her with The Complete Works of William Shakespeare and her unconditional support on her endeavour to act in New York City. _

_Her father was a follower of Robert Owen and held progressive political views. Though her father was an insurance broker, he traveled a lot during her childhood and in the summer of 1880, Robins accompanied him to mining camps and was able to attend theatre in New York and Washington along the way. Because of her intelligence, Elizabeth was one of her father’s favorites. He wanted her to attend Vassar College and study medicine. At the age of fourteen, Robins saw her first professional play (Hamlet) which ignited her desire to pursue an acting career. From 1880-1888, she would have an acting career in America. _

_In 1885 Robins married actor George Richmond Parks. Parks was also an actor, however, nowhere near the caliber and demand of Robins, who would be on tours throughout their marriage. Her refusal to leave the stage and become the typical housewife drove Parks to kill himself in 1888 by jumping off a bridge into the Charles River. Stating in his suicide note, “I will not stand in your light any longer.” _

_Later that year, on September 3, Robins was free to pursue a theatrical career in England. “Her move to London represented a rebirth after personal tragedy in America.” After arriving in New York, Robins soon crossed paths with James O’Neill, who helped her join Edwin Thomas Booth’s theatre and earn her first role. By 1882, she was touring, yet grew bored and irritated playing “wretched, small character parts” and in 1883 joined the Boston Museum stock company. It would be here that she met her future husband, George Richmond Parks, who was also a member of the company. Although her husband struggled to get parts, her own acting career gained momentum and she was soon in great demand. Soon after her husbands suicide, Robins made a transition to London in 1888. _

_Except for extended visits to the U.S. to visit family, she remained in England for the rest of her life. At a social gathering her first week in England, she had the opportunity to meet Oscar Wilde. He was a huge fan of hers and throughout her career, would come see her act and give her critiques such as in one of her roles in Frances Hodgson Burnett’s The Real Little Lord Fauntleroy in 1889. Wilde’s only critique for her was “you have definitely asserted your position as an actress of the first order. Your future on our stage is assured.” _

_Early in her tenure in London, she became enamoured of Ibsen’s plays. In 1891 London matinee revival of A Doll’s House put Robins in contact with Marion Lea. Together they would form a joint-management, making this the “first step toward the theatre that Robins had dreamed of… a theatre of independent management and artistic standards.” Finding work in “ ‘women’s plays’ written by men like Ibsen,” Robins and Marion Lea brought strong female characters to the stage. George Bernard Shaw noted “what is called the Woman Question has begun to agitate the stage.”  Together Elizabeth Robins and Marion Lea brought Ibsen’s Hedda Gabler to the stage, for the first time ever in England. A Doll’s House “marked an important step in the representation of women by dramatists” and Hedda marked an important step for Elizabeth Robins, becoming her defining role. “Sarah Bernhardt could not have done it better,” wrote William Archer in a publication of The World. From then on, Hedda became synonymous with Robins to the English stage. Robins and Lea would go on to produce a handful of Ibsen’s other ‘New Woman’ plays, before their eventual split. _

_“The experience of acting and producing Ibsen’s plays and the reactions to her work helped transform Elizabeth over time into a committed supporter of women’s rights.” In 1898, she joined forces with her new lover, William Archer to create the New Century Theatre and again, they produced non-profit Ibsen plays. She became known in Britain as “Ibsen’s High Priestess.” In 1902 she was Lucrezia in Stephen Phillips’s Paolo and Francesca at the St. James’s Theatre, London. _

_Ending her acting career at the age of forty, Robins made her mark on the English stage as not only an actress but an actress-manageress.  Robins realized her income from acting was not stable enough to carry her. While Robins was busy being a successful actress, she had to leave England to look for her brother in Alaska, who had gone missing. Her experiences searching for her brother led her to write her novels, Magnetic North (written in 1904) and Come and Find Me (1908). Before this, she had written novels such as George Mandeville’s Husband (1894), The New Moon (1895), Below the Salt and Other Stories (1896) and several others under the name of C. E. Raimond. She explained her use of a pseudonym as a means of keeping her acting and writing careers separate but gave it up when the media reported that Robins and Raimond were the same. She enjoyed a long career as a fiction and nonfiction writer. _

_In her biography of Elizabeth Robins, Staging a Life, Angela John says, “It is possible to trace in Elizabeth’s writing from 1890s onwards an emerging feminist critique, clearly, but only partly, influenced by the psychological realism of Ibsen, which would find most confident expression in 1907 in her justly celebrated novel The Convert”. Robins’ main character, Vida, speaks to “male politicians and social acquaintances”, something very different from what the women of Robins’ time did – something very reminiscent of one of Ibsen’s ‘new women.’ Adapted from this novel is, Elizabeth Robins’ most famous play, Votes for Women! The first play to bring the “street politics of women’s suffrage to the stage”, Votes for Women! led to a flourish of suffrage drama. _

_Elizabeth Robins first attended “open-air meetings of the suffrage union” when the Women’s Social and Political Union moved its headquarters from Manchester to London in 1906. It was then that she “abandoned” the current play she was writing and worked to complete the very first suffrage drama. “The more Robins became immersed in the work, the more she became converted to the cause”.  She became a member of the National Union of Women’s Suffrage Societies, as well as the Women’s Social and Political Union, although she broke with the WSPU over its increasing use of violent militancy. She remained a strong advocate of women’s rights, however, and used her gifts as a public speaker and writer on behalf of the cause. _

*In 1907 her book The Convert was published. It was later turned into a play that became synonymous with the suffrage movement. Robins remained an active feminist throughout her life. In the 1920s she was a regular contributor to the feminist magazine, Time and Tide. She also continued to write books such as Ancilla’s Share: An Indictment of Sex Antagonism, which explored the issues of sexual inequality. She collected and edited speeches, lectures, and articles dealing with the women’s movement, some of which had never previously appeared in print (Way Stations, published by Dodd, Mead and Company, New York, 1913). *

_Robins was involved in the campaign to allow women to enter the House of Lords. Her friend, Margaret Haig, was the daughter of Viscount Rhondda. He was a supporter of women’s rights and in his will made arrangements for Margaret to inherit his title. This was considered radical, as women did not normally inherit peerage titles. When Rhondda died in 1918 the House of Lords refused to allow Margaret, now the Viscountess Rhondda, to take her seat. Robins wrote numerous articles on the subject, but the House of Lords refused to change its decision. _

*It was not until 1958 that women were first admitted to the House. Frederick Pethick-Lawrence, 1st Baron Pethick-Lawrence credited Robins with explaining to him the difference between a suffragette and a suffragist.  beautiful woman, Robins was pursued by many men. She admitted to a deep attraction to her close friend, the highly respected literary critic and fellow Ibsen scholar, William Archer. As a married man Archer was unavailable, however. Except for her brief marriage to George Parks, she remained a fiercely independent single woman. Highly intelligent, she was welcomed into the cream of London’s literary and artistic circles, enjoying friendships with George Bernard Shaw, Oscar Wilde, and Henry James, as well as a tempestuous romantic (but probably non-physical) relationship with the much younger future poet laureate John Masefield. *

*In 1900 she traveled alone to the gold rush camps of Alaska in search of her favorite brother Raymond Robins whom she feared was lost in the Yukon. After a long and arduous journey, she located Raymond in Nome. She shared his life in wild and lawless Alaska throughout the summer of 1900. Her adventures were not without cost – the typhoid fever she contracted at that time compromised her health for the rest of her life. Robins’s tales about Alaska provided material for a number of articles she sent on to London for publication. Her best selling book, The Magnetic North, is an account of her experiences, as is The Alaska-Klondike Diary of Elizabeth Robins. *

_Although she rejected her father’s plans to be educated as a doctor, she retained a strong interest in medicine. In 1909 she met Octavia Wilberforce, a young woman whose fervent desire to study medicine was thwarted by a family that felt intellectualism and professional careers were ‘unsexing’ for women. When Wilberforce’s father not only refused to pay for her studies, but disinherited her for pursuing them, Robins and other friends provided financial and moral support until she became a physician. While some have conjectured that Robins and Wilberforce were romantically involved, such insinuation has never been supported by the considerable scholarly material available about both women, nor is it born out in their own copious written material. All evidence points to Robins and Wilberforce enjoying a relationship much like that of mother and daughter. _

In her declining years she developed a friendship with Virginia and Leonard Woolf. Dr Wilberforce, the great-granddaughter of William Wilberforce, the British emancipator of slaves, looked after Robins until her death in 1952, just months shy of her 90th birthday…’