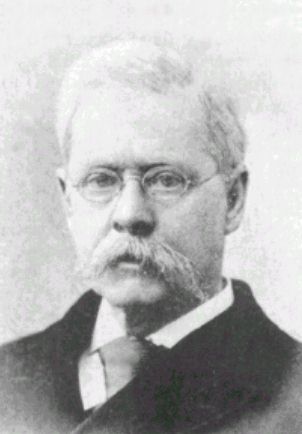 **Samuel Arthur Jones (1834-1912) *(\photo used courtesy of Homéopathe International by Sylvain Cazalet at PHOTOTHÈQUE HOMÉOPATHIQUE) MD 1860 practiced in New Jersey from 1863 until 1875, and who was a Professor of Histology and Pathology at New York Homeopathic Medical College, and Chair of Materia Media in 1875 (John S. Haller, The history of American homeopathy: the academic years, 1820-1935, (Pharmaceutical Products Press, 22 Sep 2005). Page 162).

Samuel Arthur Jones retired from both positions between 1878-1880 to remain in private practice, and to pursue his other interests of collecting books (Herman Melville, Moby Dick, Or The Whale: Volume 6, Scholarly Edition, (Northwestern University Press, 9 Sep 1988). Page 1034).

Herman Melville’s novel Moby Dick would have been lost to posterity altogether if it had not been for homeopath Samuel Arthur Jones (Herman Melville, Moby Dick, Or The Whale: Volume 6, Scholarly Edition, (Northwestern University Press, 9 Sep 1988). Page 1034), who brought his catalogue and preserved his books.

Stuart Close wrote: ‘… To quote only one of many authors, Prof. Samuel A. Jones of Ann Arbor: As long ago as 1872, when editor of the American Homœopathic Observer, he wrote these prophetic words, which have since been literally fulfilled. “Let us guard our homœopathic heritage most jealously. The provings on the healthy, the simillimum as the remedy, the single remedy, the reduced dose, may be and will be filled from us one by one and christened with new names to bide the theft. What will become of homœopathy? It will live, despite them, in Hahnemann’s posology. The very infinitesimals which many are so ready to throw away are all that will save us.”… (Stuart Close, _The Genius of Homeopathy_, (Nanopathy, 1967). Page 163)…’

The Genius of Homeopathy (2010) by Francis Treuherz contains a chapter called The Porcelain Painter’s Son, a Fantasy by Samuel Arthur Jones, (first published in 1898 by Boericke & Tafel) which is a fictionalised biography of Samuel Hahnemann - see www.homeopathyhelpline.com/books-by-francis

From [http://umhistory.dc.umich.edu/history/Faculty_History/J/Jones,*Samuel_Arthur.html\](http://umhistory.dc.umich.edu/history/Faculty_History/J/Jones,_Samuel_Arthur.html) ‘… _SAMUEL ARTHUR JONES was born in Manchester, England, June 11, 1834, son of John Edwin and Margaret (Edwards) Jones. He is of Welsh ancestry. His parents emigrated to America in 1842. He was prepared for college at the Free Academy in Utica, New York, but never matriculated. He began his medical studies under Dr. W. H. Watson, of Utica, and was graduated Doctor of Medicine in 1860 at the Missouri Homeopathic Medical College, St. Louis, and in 1861 at the Homeopathic Medical College of Pennsylvania. He entered upon the practice of his profession the same year. He served as First Assistant Surgeon of the Twenty-second New Jersey Infantry in 1862-1863, and later as Assistant Surgeon of the Twenty-second Regiment of the New York State National Guard. He was First Secretary of the American Microscopical Society of New York in 1865. In 1870 he was appointed Professor of Histology in the New York Homeopathic Medical College, and in 1872 a member of the first New York State Board of Medical Examiners. In 1875 he accepted a call to organize the newly founded Homeopathic Medical College of the University of Michigan, serving as Dean and as Professor of Materia Medica and Therapeutics. From 1878 to 1880 he was Dean and Professor of Materia Medica, Therapeutics, and Experimental Pathogenesy. He resigned this position in 1880, and since that time has been continuously in active practice in Ann Arbor. He is a corresponding member of the British Homeopathic Society, and an honorary member of the State Homeopathic societies of Pennsylvania and New York. To his professional duties he has added a lively interest in general literature. He is Senior Honorary Member of the Rowfant Club, of Cleveland, Ohio, and has edited several of their publications. He has made extensive collections of a number of English and American authors, notably Goldsmith, Carlyle, Landor, Emerson, Bronson Alcott, Thoreau, William Ellery Channing, Hawthorne, Lowell, Longfellow, Burroughs, and Whitman, and in various other directions has shown the results of wide literary culture. He was married November 26, 1863, to Maria Jane Van Brunt, and they have had eleven children: Elsie (A.B. 1888, now Mrs. Charles H. Cooley, of Ann Arbor), Arthur, Carroll Dunham (B.S. [E.E.] I897, E.E. I897, instructor in the University from 1897 till his death, July 30, 1901), Samuel (deceased), Rembert, Howell, Margaret (A.B. 1901), Paul (deceased), Paul Van Brunt (of the class of I906), Winifred, and Esyllt. Burke A. Hinsdale and Isaac Newton Demmon, History of the University of Michigan (Ann Arbor: University of Michigan Press, 1906), pp. 250-251…‘*

From Herman Melville, Moby Dick, Or The Whale: Volume 6, Scholarly Edition, (Northwestern University Press, 9 Sep 1988). Pages 1034-1035: Jones began to collect books in 1857 following a visit to London when he purchased some 18th century literature, and soon his collection ‘… _encompassed three fields; medical books of the 16th century, 17th century, 18th century (this collection had reached 1300 volumes by 1879); 18th century English literature; and books and manuscripts by a group of 19th century authors, particularly Carlyle, Thoreau and the American Transcendentalists, and other American writers of the period, including Hawthorne and Melville. He concentrated on the 19th century segment of his library in his later years and was best known for the  Carlyle and Thoreau collections. He edited Collectanea Thomas Carlyle, 1821-1855 in 1903, and a catalogue of his outstanding Carlyle holdings, which went to the University of Michigan in 1912, was published by the University in 1919 (A Catalogue of the Dr. Samuel A Jones Carlyle Collection (Ann Arbour, 1919) Compiled by Mary Eunice Ward). Thoreau he promoted even more intensively in a series of publications, including the first substantial bibliography of Thoreau, issued by the Rowfant Club on Clevenland in 1894. A more detailed history of his purchases could be constructed from the information he preserved in his copies, as Isaac N Demmon has remarked, ’… the flyleaves of his books contain many valuable bibliographical notes on the history of these ‘finds’ ’… and the Moby Dick is a perfect illustration’. After Jone’s death in 1912, the books that were not purchased by the University of Michigan were eventually moved (along with papers and letters) to Urbana by Jones’s son Paul Van Brunt Jones, who was a Professor of History at the University of Illinois from 1914-1950. Most of this material remained in his house there until, after his death (1969) and that of his wife (1974), Professor George Hendrick of the English Department came upon th books and papers and was instrumental in arranging their purchase by the University of Illinois Library in 1975. Four of the Melville books from Anns Clarke’s 43rd Catalogue thus stook on the shelves of the Jones collection, first in Ann Arbour and then in Urbana, from 1896 until their transfer, nearly 80 years later, to the Rare Book Room at Illinois…’ _(See also George Hendrick, Henry Salt, Humanitarian Reformer and Man of Letters, (University of Illinois Press, 1977).

Samuel Arthur Jones was an editor of Pamphlets - homoeopathic, Volume 1- 11, and he wrote The Grounds of a Homœopath’s Faith: Three Lectures Delivered at the Request of Matriculates of the Department of Medicine and Surgery (old School) of the University of Michigan, Homoeopathy, Its Nature, Purpose and Place: A Lecture Delivered at the Opening of the Homoeopathic Medical College of the University of Michigan, October 1st, 1875, Catalogue of Homoeopathic Journals, Learned Society Publications, Etc, On the Erythraemalysis Produced by Picric Acid, Our Indigenous Remedies, _and a fictionalised biography of Samuel Hahnemann called _The Porcelaine Painter’s Son_. _