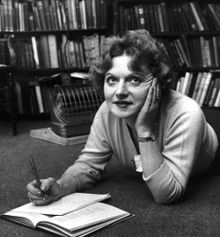 Muriel Spark was an advocate of homeopathy, saying ‘… *gin and arnica

From http://en.wikipedia.org/wiki/Muriel_Spark She was born Muriel Sarah Camberg in Edinburgh, the daughter of Sarah Elizabeth Maud (née Uezzell) and Bernard Camberg, an engineer. Her father was Jewish and her mother had been raised a Presbyterian, as was Spark. She was educated at James Gillespie’s High School for Girls (1923 – 1935). The family lived in the Bruntsfield area of Edinburgh. In 1934–35 she took a course in “Commercial correspondence and précis writing” at Heriot-Watt College. She taught English for a brief time and then worked as a secretary in a department store.

On 3 September 1937 she married Sidney Oswald Spark, and soon followed him to Rhodesia (now Zimbabwe). Their son Robin was born in July 1938. Within months she discovered that her husband was manic depressive and prone to violent outbursts. In 1940 Muriel left Sidney and Robin. She returned to the United Kingdom in early 1944, taking residence at the Helena Club in London; years later the club would be her inspiration for the fictional May of Teck Club in The Girls of Slender Means. She worked in Intelligence for the remainder of World War II. She provided money at regular intervals to support her son as he toiled unsuccessfully over the years. Spark maintained it was her intention for her family to set up home in England, but Robin returned to Britain with his father later to be brought up by his maternal grandparents in Scotland.

Spark began writing seriously after the war, under her married name, beginning with poetry and literary criticism. In 1947 she became editor of the Poetry Review. In 1954 she decided to join the Roman Catholic Church, which she considered crucial in her development toward becoming a novelist. Penelope Fitzgerald, a fellow novelist and contemporary of Spark, wrote that Spark “had pointed out that it wasn’t until she became a Roman Catholic… that she was able to see human existence as a whole, as a novelist needs to do.” In an interview with John Tusa on BBC Radio 4, she said of her conversion and its effect on her writing: “I was just a little worried, tentative. Would it be right, would it not be right? Can I write a novel about that — would it be foolish, wouldn’t it be? And somehow with my religion — whether one has anything to do with the other, I don’t know — but it does seem so, that I just gained confidence…” Graham Greene and Evelyn Waugh supported her in her decision.

Between 1955 and 1965 she lived in a bedsit at 13 Baldwin Crescent, Camberwell, south-east London. Her first novel, The Comforters, was published in 1957. It featured several references to Catholicism and conversion to Catholicism, although its main theme revolved around a young woman who becomes aware that she is a character in a novel.

The Prime of Miss Jean Brodie (1961) was more successful. Spark displayed originality of subject and tone, making extensive use of flashforwards and imagined conversations. It is clear that James Gillespie’s High School was the model for the Marcia Blaine School in the novel.

After living in New York City for some years, she moved to Rome, where she met artist and sculptor Penelope Jardine in 1968. In the early 1970s they settled inTuscany, in the village of Civitella della Chiana, of which in 2005 Spark was made an honorary citizen. She was the subject of frequent rumours of lesbian relationships from her time in New York onwards, although Spark and her friends denied their validity. She left her entire estate to Jardine, taking measures to ensure that her son receive nothing.

Spark refused permission to publish a biography of her written by Martin Stannard. Penelope Jardine now holds publication approval rights, and the book was published in July 2009. On 27 July 2009 Stannard was interviewed on Front Row, the BBC Radio 4 arts programme. According to A. S. Byatt, “She [Jardine] was very upset by the book and had to spend a lot of time going through it, line by line, to try to make it a little bit fairer”.

Spark received the James Tait Black Memorial Prize in 1965 for The Mandelbaum Gate, the US Ingersoll Foundation T. S. Eliot Award in 1992 and the David Cohen Prize in 1997. She became Dame Commander of the Order of the British Empire in 1993, in recognition of her services to literature. She has been twice shortlisted for the Booker Prize, in 1969 for The Public Image and in 1981 for Loitering with Intent.[18] In 1998, she was awarded the Golden PEN Award by English PEN for “a Lifetime’s Distinguished Service to Literature”. In 2010, Spark was shortlisted for the Lost Man Booker Prize of 1970 for The Driver’s Seat.

Spark and her son Robin had a strained relationship. They had a falling out when Robin’s Orthodox Judaism prompted him to petition for his late grandmother to be recognized as Jewish (Spark’s maternal grandmother, Adelaide Hyams, had married Spark’s maternal grandfather, Tom Uezzell, in a church; it was unclear whether both of Adelaide’s parents were Jewish). The devout Catholic Spark reacted by accusing him of seeking publicity to further his career as an artist. During one of her last book signings in Edinburgh she responded to an enquiry from a journalist asking if she would see her son by saying ‘I think I know how best to avoid him by now’.