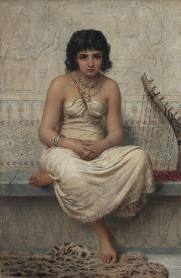 Edwin Longsden Long was a close friend of Peter Stuart and a frequent visitor at his home, Elm House. Edwin Long painted several pictures for his friend, which hung proudly in Elm House (L Finigan, The Life of Peter Stuart, the “Ditton Doctor”. [With Plates, Including Portraits and Facsimiles], (for family circulation 2nd edition, published by Books Limited, 187 Fleet Street London EC4 (Clifford’s Inn Passage), 1920, and by Liverpool and Prescot 1921). Page 44).

Edwin Longsden Long painted the Entry of Columbus into Barcelona 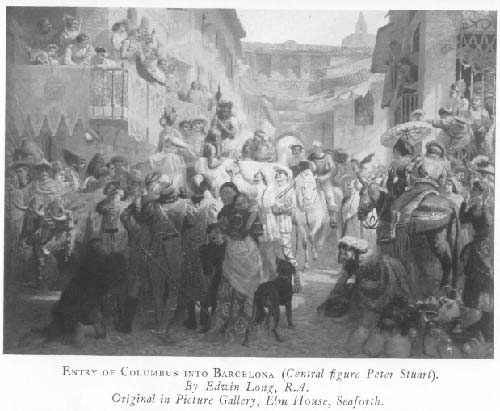 , with Peter Stuart as the central figure (L Finigan, The Life of Peter Stuart, the “Ditton Doctor”. [With Plates, Including Portraits and Facsimiles], (for family circulation 2nd edition, published by Books Limited, 187 Fleet Street London EC4 (Clifford’s Inn Passage), 1920, and by Liverpool and Prescot 1921). Page 78).

From http://en.wikipedia.org/wiki/Edwin_Long  Long was born in Bath, Somerset, the son of E. Long, an artist (from Kelston in Somerset), and was educated at Dr. Viner’s School in Bath.

Adopting the profession of a painter, Long came to London and studied in the British Museum. He was subsequently a pupil in the school of James Mathews Leigh in Newman Street London, and practiced first as a portrait artist painting Charles Greville [Lady Charlotte Greville], Lord Ebury [Robert Grosvenor 1st Baron Ebury] and others.

Long made the acquaintance of John Phillip RA, and accompanied him to Spain, where they spent much time. Long was greatly influenced by the paintings of Velasquez and other Spanish masters, and his earlier pictures, such as ‘La Posada’ (1864) and ‘Lazarilla and the blind beggar’ (1870), were painted under Spanish influence. His first important pictures were ‘The Suppliants’ (1872) and ‘The Babylonian marriage market’ (both subsequently purchased by Thomas Holloway). In 1874, he visited Egypt and Syria, and subsequently his work took a new direction. He became thoroughly imbued with middle-eastern archaeology and painted oriental scenes like ‘The Egyptian Feast’ (1877), ‘The Gods and their makers’ (1878) etc.

Long was elected an associate of the Royal Academy in 1870 and an academician (RA) in 1881. His pictures always attracted attention and his ‘Diana or Christ?’ (1881) greatly enhanced his reputation at the time. His pictures suited the taste and appealed to the religious sentiment of a large portion of the public, and their popularity was increased by a wide circulation of engravings. He consequently determined to exhibit his next pictures in a separate gallery of his own in Bond Street, London and there in 1883, and the following years, his ‘Anno Domini’ and ‘Zeuxis at Crotona’ met with great commercial success.

Long died from pneumonia resulting from influenza, at his home, “Kelston” in Netherhall Gardens, Hampstead, on 15 May 1891, in his sixty-second year. He was buried in West Hampstead Cemetery. The will signed by him on the day of his death was the subject of a lawsuit, to which his relatives were parties, but the matter in dispute was amicably settled.

Long married a daughter of Dr. William Aiton, by whom he left a family, of whom a son, Maurice Long, was killed in a railway accident at Burgos in Spain on 23 Sep. 1892.

Besides the “Edwin Long” Gallery in Old Bond Street, a number of his pictures was collected together after his death, and formed the nucleus of a gallery of Christian Art which replaced the works of Gustave Doré in the well-known gallery in New Bond Street. Long had considerable practice as a portrait painter but his success in that line was not conspicuous, although he obtained high patronage and very large prices. He painted for the Baroness Burdett Coutts (his chief patron) [daughter of Francis Burdett] portraits of herself, her friend Mrs. Brown, and Henry Irving. Among other portraits of his latter years were a memorial portrait of the Earl of Iddesleigh, of which he painted a replica for the National Portrait Gallery, portraits of Cardinal Manning (perhaps his best effort in this line), Samuel Cousins, Sir Edmund Henderson and others. According to art historian Lionel Cust, “In his earlier works Long showed great power and thoroughly deserved his success and popularity”, but added that his later works “suffered from a continual repetition of types which resulted in monotony”.