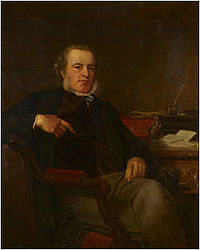 Henry Austin Bruce 1st Baron Aberdare (1815-1895) was a British Liberal Party politician, who served in government most notably as Home Secretary (1868–1873) and as Lord President of the Council.

Baron Aberdare supported homeopath John Ozanne against an attack from old medicine in 1862. In 1862, Colonel Slade, Governer of the Channel Islands [John Marcus Slade 1801 - 1872], appointed John Ozanne to Surgeon of the Royal Guernsey Militia, much to the rage of the allopathic physicians, who resigned en masse in protest. Nine months later, the resignations of the allopathic physicians were accepted by the Home Secretary [Henry Austin Bruce 1st Baron Aberdare (1815-1895)], though the regimental officers who had protested were told to resume their duties. John Ozanne was retained as Head and sole representative of the medical staff of the Guernsey Militia. The allopaths who had opposed John Ozanne all had large private practices and sustained hefty financial losses as a result of this judgement. (John James Drysdale, Robert Ellis Dudgeon, John Rutherford Russell, Richard Hughes (Eds.), The British Journal of Homeopathy, Volume 23, (Henry Turner, London, Groombridge, London, E A Lodge, J C Pottage Edinburgh, William Radde Detroit and Michigan, 1865). Page 350).

From http://en.wikipedia.org/wiki/Henry_Bruce,_1st_Baron_Aberdare  Henry Bruce was born at Duffryn, Aberdare, Glamorganshire, the son of John Bruce, a Glamorganshire landowner, by his wife Sarah, daughter of Reverend Hugh Williams Austin. John Bruce’s original family name was Knight, but on coming of age in 1805 he assumed the name of Bruce: his mother, through whom he inherited the Duffryn estate, was the daughter of William Bruce, high sheriff of Glamorganshire.

Henry was educated at the Bishop Gore School, Swansea ( Swansea Grammar School), and in 1837 was called to the bar. Shortly after he had begun to practice, the discovery of coal beneath the Duffryn and other Aberdare Valley estates brought his family great wealth. From 1847 to 1854 Bruce was stipendiary magistrate for Merthyr Tydfil and Aberdare, resigning the position in the latter year, when he entered parliament as Liberal member for Merthyr Tydfil. During this time, he became involved in the management of the Dowlais Iron Company.

In 1862 he became Under-Secretary of State for the Home Department, and in 1868, after losing his seat at Merthyr Tydfil, but being re-elected for Renfrewshire, he was made Home Secretary by William Ewert Gladstone. His tenure of this office was conspicuous for a reform of the licensing laws, and he was responsible for the Licensing Act 1872, which made the magistrates the licensing authority, increased the penalties for misconduct in public-houses and shortened the number of hours for the sale of drink.

In 1873 Bruce relinquished the home secretaryship, at William Ewert Gladstone’s request, to become Lord President of the Council, and was raised to the peerage as Baron Aberdare, of Duffryn in the County of Glamorgan, on 23 August that year.

The defeat of the Liberal government in the following year terminated Lord Aberdare’s official political life, and he subsequently devoted himself to social, educational and economic questions. In 1876 he was elected a Fellow of the Royal Society; from 1878 to 1891 he was president of the Royal Historical Society; and in 1881 he became president of both the Royal Geographical Society and the Girls’ Day School Trust. In 1888 he headed the commission that established the Official Table of Drops, listing how far a person of a particular weight should be dropped when hanged for a capital offence (the only method of ‘judicial execution’ in the United Kingdom at that time), to ensure an instant and painless death, by cleanly breaking the neck between the 2nd and 3rd vertebrae, an ‘exacting science’, eventually brought to perfection by Chief Executioner Albert Pierrepoint.

In 1882 he began a connection with West Africa which lasted the rest of his life, by accepting the chairmanship of the National African Company, formed by Sir George Goldie, which in 1886 received a charter under the title of the Royal Niger Company and in 1899 was taken over by the British government, its territories being constituted the protectorate of Nigeria. West African affairs, however, by no means exhausted Lord Aberdare’s energies, and it was principally through his efforts that a charter was in 1894 obtained for the Cardiff University. Lord Aberdare, who in 1885 was made a Knight Grand Cross of the Order of the Bath, presided over several Royal Commissions at different times.

Lord Aberdare died in London on 25 February 1895, aged 79, and was succeeded in the barony by his only son from his first marriage, Henry. Lady Aberdare, born 1827, died in April 1897 and was a proponent of women’s education and active in the establishment of Aberdare Hall in Cardiff. Henry Austin Bruce is buried at Aberffrwd Cemetery in Mountain Ash, Wales. His large family plot is surrounded by a chain, and his grave is a simple Celtic cross with double plinth and kerb. In place is written “To God the Judge of all and to the spirits of just men more perfect.”