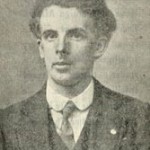 Patrick Joseph Dollan (1885–1963) and his wife, Agnes, Lady Dollan (née Moir; 1887–1966) were Glasgow activists in the Scottish Independent Labour Party. During the First World War they campaigned against the Munitions of War Act of 1915 which suspended trade unionists’ rights for the duration of hostilities. He served as Lord Provost of Glasgow from 1938-41. He was later knighted.

Patrick Dollan was a patient of homeopath Ephraim Connor (please see /archives/2009/03/11/ephraim-connor-1893-1981/ With grateful thanks to Kate McIntosh www.stirlinghomeopathy.co.uk, friend and student of Ephraim Connor, for writing his obituary in February 2012). Patrick Dollan persuaded Ephraim Connor to take a degree in medicine at the University of Glasgow. Ephraim Connor gained entrance and went in 1940 into the same year as his son Dr James Connor, also a homoeopath. Ephraim Connor completed 3 years of the course, but his home was bombed in the Clydebank blitz and due to financial constraint he was unable to complete his degree.

From http://en.wikipedia.org/wiki/Patrick_Dollan ’… Born in Baillieston and raised Catholic, Dollan attended St Bridget’s elementary school until he was ten years old. He later joined his father working as a minor at the Clydeside Colliery.

Patrick and Agnes Dollan were vocal in raising awareness of the plight of thousands of Glasgow tenants who were having their rents raised at a time when military conscription had reduced their earning potential. Government concern at the volatile situation in the city led to the Rent Restrictions Act of November 1915, freezing rents at pre-war levels.

In the 1920s he was the author of a booklet, The Clyde Rent War!, a narrative of the Glasgow rent strikes of 1915-16, which also contained proposals for housing policy reform. In 1939 he won the inaugural St Mungo Prize, which is awarded triannually to the person deemed to have done the most to promote and improve the city of Glasgow in the previous three years. At the beginning of World War II, Dollan encouraged his fellow Glaswegians to support the war effort against fascism, for which efforts he was later knighted.