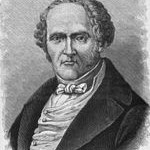 Francois Marie Charles Fourier (1772-1837) **was an influential French socialist philosopher, who is credited with inventing the term ‘feminism’. His influence was widely felt across the Western world, and Fourierist influenced communities sprang up in America at this time. Many people were deeply influenced by his philosophy and they have become main currents in modern societies across the world. The influence of Fourier’s ideas in French politics was carried forward into the 1848 Revolution and the Paris Commune.

Fourier was an advocate of homeopathy and he was attended by Leon Francois Adolphe Simon (Jonathan Beecher, Charles Fourier: The Visionary and His World, (University of California Press, 25 Jul 1990). Page 494).

http://en.wikipedia.org/wiki/Charles_Fourier  Fourier ’… was a French philosopher. An influential thinker, some of Fourier’s social and moral views, held to be radical in his lifetime, have become main currents in modern society. Fourier is, for instance, credited with having originated the word feminism in 1837.

Fourier’s views inspired the founding of the community called La Reunion near present-day Dallas, Texas as well as several other communities within the United States of America, including the North American Phalanx in New Jersey and the Community Place and Sodus Bay Phalanx in New York State.

Fourier was born in Besançon, France on April 7, 1772. The son of a small businessman, Fourier was more interested in architecture than he was in his father’s trade. He wanted to become an engineer, but the local Military Engineering School only accepted sons of noblemen.[2] Fourier later said he was grateful that he did not pursue engineering, because it would have consumed too much of his time and taken away from his true desire to help humanity.

His father died in 1781, and Fourier received two-fifths of his father’s estate, valued at more than 200,000 francs. This inheritance enabled Fourier to travel throughout Europe at his leisure. In 1791 he moved from Besançon to Lyon, where he was employed by the merchant M. Bousqnet. Fourier’s travels also brought him to Paris, where he worked as the head of the Office of Statistics for a few months. Fourier was not satisfied with making journeys on behalf of others for their commercial benefit. Having a desire to seek knowledge in everything he could, Fourier often would change business firms as well as residences in order to explore and experience new things. From 1791 to 1816 Fourier was employed in the cities of Paris, Rouen, Lyon, Marseille, and Bordeaux. As a traveling salesman and correspondence clerk, his research and thought was time-limited: he complained of “serving the knavery of merchants” and the stupefaction of “deceitful and degrading duties”. He took up writing, and his first book was published in 1808.