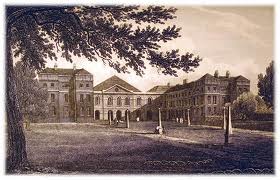 {::}John Spurgin 1797 - 1866, was a British orthodox physician and medical writer, Senior Physician to the Foundling Hospital from 1835 to his death, and Honorary Physician at St. Mark’s Hospital (see Frontispiece to** *{::}Cure of the sick: not homœopathy, not allopathy, but judgment).*

Spurgin was the second Chairman of the Swedenborg Society, indeed, he was the longest serving Chairman, holding this office nearly every year from the latter 1820s until the early 1860s. Spurgin, as a young medical student at Guy’s Hospital, had acted as a mentor to John Keats, even writing earnest letters to the poet from Cambridge encouraging him to read Emanuel Swedenborg.

Spurgin was a colleague of John Ryan (who wrote an article _Spurginism _and coined the term Spurginism in honour of his friend who wrote two works referring to homeopathy), and James John Garth Wilkinson.

’… As for our mutual friend Dr. Spurgin [John Spurgin]*, I fear his advice would not help me, for his practice is not, I am sorry to say, on the increase. I spent a day or two with him at his country place at Bradwell in the autumn, and he was most kind; but he complains heavily of the present state of medicine… Dr. Spurgin, by the way, delivers the _[Harveian]_ Oration next year… __(_Swedenborg Archive K134 [b] Letter dated 19.12.1850 from Garth Wilkinson to his father James John Wilkinson senior*)’_

Spurgin wrote Cure of the sick: not homeopathy, not allopathy, but judgment, Homeopathy not ‘the law of healing’, and a very large number of other publications on various matters.

Spurgin also had an extensive practice at 38 Guilford Street, and later at 17 Great Cumberland Street,

From http://en.wikisource.org/wiki/Spurgin,John(DNB00) ‘… SPURGIN, JOHN (1797–1866), medical writer, son of William Spurgin, farmer, was born at Orplands, Bradwell, Essex, in 1797, and educated at Chelmsford grammar school from 1804 to 1813, and at St. Thomas’s Hospital (1813–15). He matriculated at Cambridge from Caius College on 3 July 1814, and was scholar from Michaelmas 1815 to Michaelmas 1816. He afterwards proceeded to Edinburgh, and, returning to Cambridge, graduated M.B. 1820, and M.D. 1825. He was admitted an inceptor candidate of the College of Physicians on 30 Sept. 1822, a candidate 30 Sept. 1825, and a fellow on 30 Sept. 1826. He was censor in 1829, and conciliarius in 1851–3 and 1862–4. He delivered the Harveian oration in 1851 and the college lectures on materia medica in 1852. Spurgin was physician to the Foundling Hospital from 1835 to his death, and about 1837 became physician to St. Mark’s Hospital. He enjoyed an extensive private practice, first at 38 Guildford Street, Russell Square, from 1820, and at 17 Great Cumberland Street, Hyde Park, from 1853 to his death. He was the inventor and patentee of an ‘endless ladder,’ an appurtenance of the scaffolding in building, which came into general use, and he also brought out the thermoscope for taking the temperature of the body. ‘Dr. Spurgin’s Condiment’ was a solution of common salt and alkaline phosphates, which he introduced as a digestive and a purifier of the blood. After an illness, brought on by injuries received from thieves in Bishopsgate Street on 20 Sept. 1865, he died at 17 Great Cumberland Street, Hyde Park, London, on 20 March 1866. His portrait is in the Royal College of Physicians. His widow, Rose, died on 30 Nov. 1882. Spurgin had from early years studied the works of Swedenborg, whose views he gradually adopted. He gave an account of his mental experiences in a lecture read before the Swedenborg Association on 24 Feb. 1847, and published in the same year as ‘A Narrative of Personal Experience concerning Principles advocated by the Swedenborg Association.’ He also projected an edition of Swedenborg’s philosophical works, and made some progress with their translation, but the only volume published was ‘The Introduction to an Anatomical, Physical, and Philosophical Investigation of the Economy of the Animal Kingdom,’ with an ‘address to the reader’ by Medicus Cantabrigiensis, 1861. Spurgin’s other works were: 1. ‘Six Lectures on Materia Medica and its Relation to the Animal Economy,’ 1853. 2. ‘The Physician for All, his Philosophy, Experience, and his Mission,’ 1855; second curriculum, 1857, dedicated to Lord Palmerston. 3. ‘Drainage of Cities, reserving their sewage for use and keeping their rivers clean,’ 1858. 4. ‘The Cure of the Sick not Allopathy nor Homœopathy, but Judgment,’ 1860…’