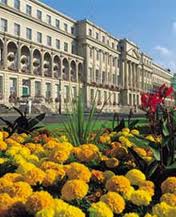 In 1855, William Gwillim was living at Berbice Villa, Hereford and he was a member of the British Institute of Homeopathy. In 1868, he was a Medical officer at the Cheltenham Homeopathic Dispensary alongside Arthur Grattan Guinness, in 1869, he was retired and living at 8 Paragon Hackney, and in 1872 he was living at The Cedars, Chertsey, he was living in Burton on Trent in 1881, and he died at Dalton House, Beckford, Gloucestershire in 1881.

On March 6 1872, at Chertsey, H. Watson, Esq., of Hackney, (was married) to Selina Waring, youngest daughter of William Gwillim, MD.