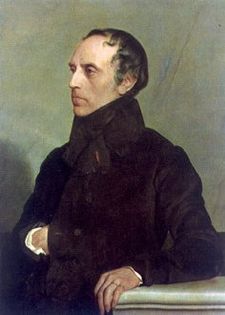 In 1835 Guizot reprimanded the French Academy of Medicine for their ‘intemperate attack’ on homeopathy and for their ‘scathing criticism’ of Samuel Hahnemann: Guizot authorised Samuel and Melanie Hahnemann to practice homeopathy in Paris in 1835.

From Rima Handley,* ** [A homeopathic love story: the story of Samuel and Melanie Hahnemann](http://books.google.co.uk/books?hl=en&id=RO238QnRkgC&dq=Dominique+Ingres+homeopath&printsec=frontcover&source=web&ots=Mgb1BwPfUg&sig=EPEUeDzMmRmkVAiOitTswHPSk84&sa=X&oi=bookresult&resnum=8&ct=result#v=onepage&q=Dominique%20Ingres%20homeopath&f=false),* (North Atlantic Books, 23 Feb 1993). Pages 98, 105:  ‘… Hahnemann is a learned man of great worth. Science must be free for all. If homeopathy is a chimera, or a system without internal cohesion, it will collapse of its own accord; if, on the contrary, it represents progress, it will develop in spite of our protective measures and it is just that which the Academy must wish for above all, since its mission is to favour science and to encourage discoveries…’

In March 1835, Guizot asked the French Academy of Medicine for a report on homeopathy when La Societe Homeopathique Gallicane applied for permission to establish and clinic and a dispensary in Paris.

Predictably, the French Academy of Medicine report was scathing and ridiculed the whole idea of homeopathy, despite the toleration of the new crazes of phrenology and mesmerism, homeopathy provoked an immediate vitriolic attack.

This violent attack was probably more to do with the fact that homeopathy was extremely popular with the aristocratic class in Paris due to the presence of Frederick Hervey Foster Quin and his successful treatment of the cholera epidemic in 1831 (Germany) and 1832 (Paris), than Samuel Hahnemann’s outright condemnation of allopathy in Leipsig in 1814, where Samuel Hahnemann proscribed allopathy as dangerous and the very cause of all disease.

Indeed, Napoleon Bonaparte and the French Revolution had swept away a great deal of the old system of medicine in France, and many were deeply influenced by the criticism of Jean Jaques Rousseau who regarded allopathy as ’an art which is more pernicious to men than all the ills it claims to cure’ (Guizot’s mother was a staunch follower of Jean Jaques Rousseau).

Pierre Jean George Cabanis also remarked at this time ’Some call medicine a scourge of humanity; physicians themselves treat it as charlatanism; on all sides one hears the reproaches of Moliere, Montaigne and Rousseau - the only sure way to recovery is through one’s own recuperative powers’.

Guizot had a fine understanding of homeopathy, and he wrote to Dorothea von Lieven in 1840 regarding international politics ‘Really, to fragment the parties even more at a time when their multiplicity makes the situation dangerous and government impossible, it is not common sense. It is homeopathy.’

In 1851, Guizot and some forty members of the French Academy of Medicine were open advocate of homeopathy.

From http://en.wikipedia.org/wiki/Fran%C3%A7ois_GuizotGuizot was a dominant figure in French politics prior to the Revolution of 1848, actively opposing as a liberal the reactionaryCharles X before his overthrow in the July Revolution of 1830, then in government service to the “citizen king” Louis Philippe, as the Minister of Education, 1832–1837, ambassador to London, Foreign Minister 1840–1847, and finally Prime Minister of France from 19 September 1847 to 23 February 1848.

Guizot’s influence was critical in expanding public education, which under his ministry saw the creation of primary schools in every French commune.

But as a leader of the “Doctrinaires”, committed to supporting the policies of Louis Philippe and limitations on further expansion of the political franchise, he earned the hatred of more advanced liberals and republicans through his unswerving support for restricting suffrage to propertied men, advising those who wanted the vote to “enrich yourselves” (enrichissez-vous) through hard work and thrift.

As Prime Minister, it was Guizot’s ban on the political meetings of an increasingly vigorous opposition in January 1848 that catalyzed the revolution that toppled Louis Philippe in February and saw the establishment of the French Second Republic.

*From http://www.ebay.co.uk/itm/1840-FRANCOIS-GUIZOT-to-Lord-Holland-Homeopathy-Dr-J-Rutherford-Russell-/311190182140?pt=LH_DefaultDomain_0&hash=item48746158fc [This letter datedWednesday 19th July 1840* _is from the personal papers of John Rutherford Russell from Francios Pierre Guillaume Guizot to Henry Holland 1st Baronet (1788-1873). In the years just preceding this, Francois Pierre Guillaume Guizot had been Ambassador to England and was therefore living in London. Henry Holland 1st Baronet (1788-1873) used homeopathy and he is quoted in John Rutherford Russell‘s Classic 1831 work on homeopathy. Francois Pierre Guillaume Guizot introduced works on homeopathy into France and authorised Samuel and Melanie Hahnemann to practice homeopathy in Paris in 1835  ‘… _ My dear Lord Holland, I am enclosing a very warm recommendation for Mr. Turnbull, addressed to Mr. Abraham Dubois, member of our House of Commons, from Granville.  I am asking him to do everything in his power to ensure that Mr. and Mrs. Turnbull receive all the support and welcome they deserve in Granville.  Our session is finished so Mr. Abraham Dubois should now be back in Granville.  If not, Mr. Turnbull could either wait until he returns or send my letter to him in Paris. As I am sure you are aware, my dear Lord, I am always happy to be able to do something to help. Best wishes, Guizot*…’