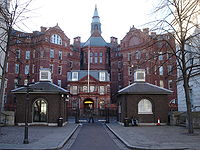 Sydney Ringer 1836 - 1910, FRS was a British orthodox physician and pharmacologist, Holme Professor of Clinical Medicine, Fellow of the Royal College of Physicians, Fellow of the Royal Society, Assistant Physician at the Children’s Hospital, Great Ormond Street, Professor of Materia Medica, Pharmacology and Therapeutics, and the Principles and Practice of Medicine at the University College Hospital Faculty of Medicine, Member of the Physiological Society,

In Ringer’s Handbook of Therapeutics, Ringer proclaimed that ’no drug was more valuable than aconite for controlling inflammation’, and he also spoke favourably about Chloride of Ammonia (homeopathic ammonium muriaticum), and arsenicum is recommended to be used along homeopathic guidelines, ‘as if the author was a homeopath’, and of camphor

Ringer advises taking the totality of the symptoms of digitalis into consideration when regarding the drug, and Ringer was among the first of allopaths to call attention to the value of the homeopathic use of certain drugs (Anon, The Century, Volume 24, (Century Company, 1882). Page 150), and demonstrated such open support for homeopathy that this led to criticism from allopaths, and Ringer was accused of having ‘homeopathic tendencies’ (H. K Lewis, Lewis’s 1844-1944: a brief account of a century’s work, (H.K. Lewis & Co, Lewis (H. K.) and Company, ltd., publishers, London, 1945). Pages 14-17),

From http://en.wikipedia.org/wiki/Sydney_Ringer Sydney Ringer was born in March 1836 in Norwich, England and died following a stroke 14 October 1910, in Lastingham, Yorkshire, England. His gravestone and many other records report 1835 for his birth, but his baptismal record at St Mary’s Baptist Chapel (referred to in Ringer’s own will) confirms this was 1836.

Born into a non-conformist family (often, but incorrectly described as ‘Quaker’) in Norwich, Ringer’s father died in 1843 while he was still very young. His elder brother, John Melancthon, amassed a vast fortune in Shanghai, whilst his younger brother, Frederick, went to Japan, where he founded the company Holme, Ringer & Co in Nagasaki and became so successful he was given the name “King of Nagasaki”

Ringer’s entire professional career was associated with the University College Hospital, London. He entered University College, London, in 1854, and graduated M.B. in 1860, being a resident medical officer in the University Medical Hospital from 1861 to 1862. He gained his M.D. in 1863 and that same year was appointed as assistant physician to the hospital, becoming a full physician in 1866. From 1865 to 1869 he also held the position as assistant physician at the Children’s Hospital, Great Ormond Street.

Ringer was an outstanding bedside teacher who continued the high standard of clinical instruction that had been established at the University College Hospital. He was not, however, in his element in set lectures. Ringer served successively as Professor of Materia Medica, Pharmacology and Therapeutics, and the Principles and Practice of Medicine at the University College Faculty of Medicine. In 1887 he was named Holme Professor of Clinical Medicine, a chair he held until his retirement in 1900.

Ringer’s Handbook of Therapeutics was a classic of its day and passed through thirteen editions between 1869 and 1897. This book was originally commissioned as a revision of Jonathan Pereira’s (1804-1853) massive Elements of Materia Medica (first edition from 1839), but Ringer was little concerned with the minutiae of traditional medical botany and materia medical. He offered instead a thoroughly practical treatise in which the actions and indications of drugs were concisely summarized.

Ringer was one of the early true clinical investigators. Patient care, clinical teaching, and writing occupied most of Ringer’s career, but for many years he also maintained a small laboratory in the department of physiology; at that time there was no pharmacology laboratory at University College.

He was universally known for his punctuality and the fanatical way he would spend every spare moment in his laboratory. It is even recorded that he climbed the palings of the hospital wall one evening when he found the door locked, in order to get to his laboratory.

Following his morning round he would always make an appearance in the physiological laboratory and make suggestions to the laboratory assistant, examine the traces and then depart for his rooms at Cavendish Place, where he would do his consultant work.

With the aid of a series of collaborators, including E G A Morshead, William Murrell (1853-1912), Harrington Sainsbury, and Dudley Buxton, Ringer published between 1875 and 1895 more than thirty papers devoted to the actions of inorganic salts on living tissues.

In a classic series of experiments performed between 1882 and 1885, Ringer began with an isolated frog heart suspended in a 0.75% solution of sodium chloride. He then introduced additional substances (for example, blood and albumin) to the solution and observed the effects on the beating heart.

He demonstrated that the abnormally prolonged ventricular dilation induced by pure sodium chloride solution is reversed by both blood and albumin. Ringer showed that small amounts of calcium in the perfusing solution are necessary for the maintenance of a normal heartbeat, a discovery he made after realizing that instead of distilled water, his technician was actually using tap water containing (in London) calcium at nearly the same concentration as the blood.

Ringer thus gradually perfected Carl Friedrich Wilhelm Ludwig’s perfusion technique by proving that if small amounts of potassium are added to the normal solution of sodium chloride, isolated organs can be kept functional for long periods of time.

This formed the basis of Ringer’s solution, which became an immediate necessity for the physiological laboratory. Clinically important derivatives include Ringer’s Lactate.

In 2007, a brief biography of Ringer was published by the Physiological Society, of which Ringer was an early member.

Sydney Ringer’s Obituary is in the British Medical Journal in 1910,