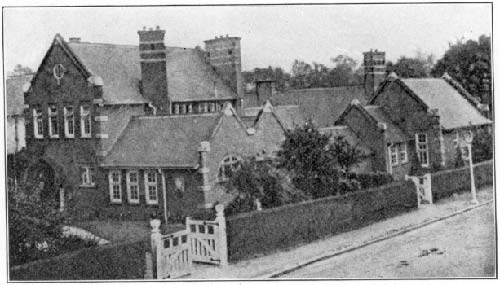 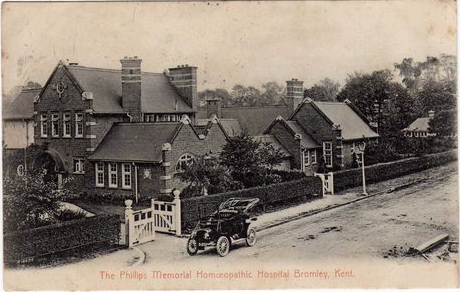 was then founded in 1889 by Edward M Madden, in honour of Robert Edward Phillips, and over the years many homeopaths worked at the hospital including David Dyce Brown, Harold Wynne Thomas,

In 1911, the hospital hosted the International Homeopathic Congress, and a meeting of the Organon Lodge of Freemasons,

The Bromley Hospital developed from a Homeopathic Dispensary which opened first in a chemists shop and then moved to a Congregational Hall, and then finally to the White Hart Inn in the High Street (Bernard Leary MRCGP, FFHom, British Homeopathic Journal, Volume 82, Issue 3, (Elsevier, July 1993). Pages 204–209).

The first physician was Alfred Orlando Jones, who was succeeded by Robert Edward Phillips, the son of a Harley Street specialist, who moved the Homeopathic Dispensary to 118 Widmore Road with the intention of opening a hospital, but unfortunately he died at the early age of 39 in 1880 before he could achieve his ambition.

Robert Edward Phillips was succeeded by Edward M Madden, who formed a Committee in 1889 to purchase a semi detached house at the corner of Widmore Road and Park Road, leased for £38 per annum, and £166.16.6 was spent on alterations, £24 on instruments, and comprising two wards each with 2 beds and a cot, a large waiting hall, a sitting room which doubled as out patients, and accommodation for Edward M Madden, a nurse and a servant.

In 1890, the house next door was rented for £75 per annum, allowing the provision of a private room for wealthier patients. The charge for the poor was 2/6d per week, and expenses for that year totalled £555.

In 1895, the freehold was purchased for £1800, but by 1897, the buildings were deemed unsatisfactory, and the Committee used the Diamond Jubilee to launch an appeal for a new hospital. William Willett was instrumental in attracting a benefactor to donate part of White Hart Field (now Queens Gardens) as the site for the new hospital 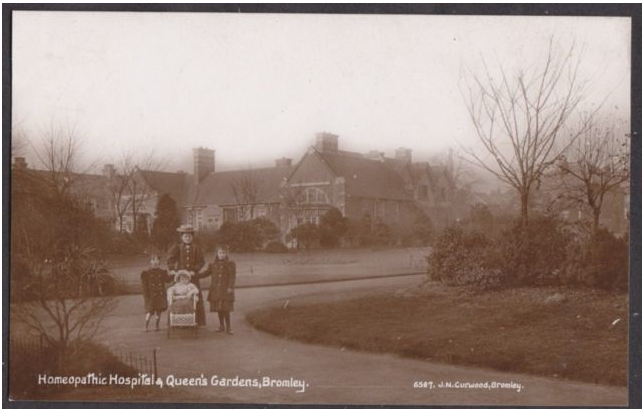 The newly built hospital was opened in 1900 by Henry Whatley Tyler, with 15 beds, 2 single rooms for surgical or special cases, a purpose built operating theatre, an outpatients department with a waiting room, a consulting room, 2 examination rooms and a dispensary.

The Matron was Ellen Hyde, a nurse trained at the Middlesex Hospital, selected by Edward M Madden despite her lack of homeopathic knowledge due to her extensive experience as a hospital matron.

The hospital was further enlarged in 1907, and the new hospital served the community until WWII when it took a direct hit from German bombers. The NHS could not find the money to rebuild the hospital after the war, and unfortunately, the site became derelict.

In 1876, Robert Edward Phillips took over the dispensary and Edward Gould was succeeded by Richard Skinner.  Robert Edward Phillips had considered building a small hospital, but his early death put paid to the project.  However, his friends and his successor, Edward M Madden, decided to establish one in his memory.

The Phillips Memorial Homeopathic Hospital and Dispensary for Bromley and District opened in 1889 in a house at the junction of Widmore Lane (later Road) and Park Road.  It proved to be very successful and, within a year, the Hospital had expanded into an adjoining house.

In 1900 a piece of land on Lowndes Avenue was leased from Sir Coles Child, the Lord of the Manor, and a new Hospital built.  It had 18 beds.

During WW1 the Hospital made 24 beds available for sick soldiers and sailors.

In 1928 the old houses were sold for £1,971 and the money invested.  In 1929 the wards were improved, with an extension being built on the female ward.

Sunlight balconies were built on both male and female wards in 1931.  In 1933 the Hospital began to treat street casualties; a modern X-ray apparatus was installed and, in 1934, the operating theatre was enlarged.  Electric heating was installed in the building.

At the outbreak of WW2 in September 1939 the Hospital was designated a casualty clearing station for a section of Bromley but, by November, when the anticipated casualties had not materialised, civilian patients were allowed to be admitted again.

In 1940 the 6-bedded male ward was closed for three months due to air-raids.  In April 1941 the Hospital was damaged by fire bombs and forced to close.  The operating theatre, kitchen, nurses’ rooms, casualty ward and women’s and children’s wards were severely damaged, but no-one was injured.  The remaining occupiable part of the building was rented out for the duration, but the Hospital officially closed in 1943.

The building was demolished in 1951.  The site is now occupied by the Glades Shopping Centre.

Queen’s Gardens are set in the shade of The Glades Shopping Centre that opened in 1991 in the centre of Bromley, with Kentish Way a major thoroughfare to the east. By the C19th the site was known as The White Hart Field and shown as such on the 1st edition OS map of 1871; it was used for public recreation and sports, and was named after the Inn of that name that stood to the side of the site. County cricket was played here until 1847.

Phillips Homeopathic Hospital had opened in 1900, was enlarged further in 1907, but it was bombed in WWII by a direct hit and although it temporarily became a home for homeless people, escalating costs meant that it was eventually demolished in 1951. From the outset patients had used the adjacent recreation ground during convalescence. When The Glades Shopping Centre was built, the site was reduced somewhat in size. The naming of The Glades, chosen through a competition in which local residents participated, reflected the leafy, green image of the borough in which Queen’s Gardens plays a part. Today the gardens have formal beds of annual bedding plants, tarmac paths, seats and a number of mature and semi-mature ornamental trees. The copper beech are especially fine.

The records of the Phillips Memorial Homeopathic Hospital are held in the National Archives,