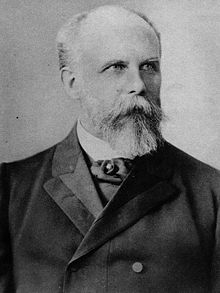 Preyer was a colleague of Gustav Theodor Fechner (who was an advocate and patient of homeopathy),

Preyer was born in Rusholme at Manchester. He studied physiology and chemistry at Heidelberg, where he received his doctorate in 1862.

Preyer was a founder of scientific child psychology, and a pioneer concerning research of human development that was based on empirical observation and experimentation.

He was inspired by Charles Darwin’s theory of evolution and Gustav Theodor Fechner’s work in psychophysics.

At Jena, Preyer introduced experimental-scientific training methods into his lectures, and also created seminars on physiology. Today, the “William Thierry Preyer Award” is issued by the European Society on Developmental Psychology for excellence in research of human development.

While still a student Preyer traveled to Iceland with the geologist Ferdinand Zirkel. The results of their journey were published in 1862.

Turning from natural science to medicine, Preyer studied in Paris with Claude Bernard and Charles Adolphe Wurtz, and later in Berlin, Vienna, and Bonn.

In 1865 Preyer qualified at Bonn as a lecturer in zoophysics and zoochemistry in the Faculty of Philosophy. The following year he received his medical degree at Bonn.

In 1867 he qualified as a teacher of physiology at the Faculty of Medicine of the University of Jena, where in 1869 he succeeded Johann Nepomuk Czermak as Professor of Physiology and was appointed Director of the Physiology Institute.

Poor health obliged him to retire in 1888, and he spent the rest of his life as a private scholar in Wiesbaden.