On Human Science, Good and Evil, and its works: and on Divine Revelation and its Works and Sciences 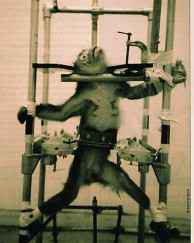 {::}[\*On Human Science, Good and Evil, and its works: and on Divine Revelation and its Works and Sciences**](http://books.google.com/books?id=8DpGAAAAYAAJ&q=On+Human+Science,+Good+and+Evil,+and+its+works:+and+on+Divine+Revelation+and+its+Works+and+Sciences&dq=On+Human+Science,+Good+and+Evil,+and+its+works:+and+on+Divine+Revelation+and+its+Works+and+Sciences&ei=kb8TTO_bEqiGzQTbgNmHCg&cd=1)* by James John Garth Wilkinson 1876

In this book written by James John Garth Wilkinson in 1876, the author outlines the evil of vivisection and prophecises where such evil will ultimately lead humanity.

Vivisection has been a terrible wickedness and a stain on the reputation of science for centuries. The Royal Society carried out experiments on live animals in its early days, and the 19th century saw an alarming proliferation of atrocious cruelty from vivisection.

James John Garth Wilkinson touches briefly on the terrors of sawing in half of spinal columns of live animals, tying off the main blood vessels of live animals to watch them die, dissecting live horses to teach medical students, of animals with their entrails exposed and ‘skilfully mangled’ by surgeons, and many other horrors that curdle the blood and rot the soul.

James John Garth Wilkinson warned that it would only be a matter of time before such monstrous experiments were performed on live humans, and indeed the 20 century unfortunately proved him correct, in the atrocities of Nazi death camps and the shocking experiments carried out in Japan and China, and many other terrible crimes against humanity across the world.

The anti vivisection movement of the 19th century was vociferous and outraged, and in this book, James John Garth Wilkinson pulls no punches in his staunch opposition to such demonic practices.

The following is a precis summary of the first 68 pages of James John Garth Wilkinson’s book, On Human Science, Good and Evil, and its works: and on Divine Revelation and its Works and Sciences written in 1876:

Arthur Wellesley 1st Duke of Wellington advised us ‘Do not make a little war’. I will therefore call this atrocity VIOLATIONISM, as its adherents prefer to call their terrible crimes vivisection. (note how Wikipedia tries to wriggle out of this: ’The term (vivisection) is often used by organizations opposed to animal experimentation and is no longer used by practicing scientists.‘)

Vivisection is a ‘diabolic’ science, and materialism disavows all allegiance to conscience or to society. ‘False science’ is antagonistic, and uses their ‘foreign virus of power’ to violate the wholism of society. All such evils should be put in the dock with of other evils to ‘gain a mass that can be grasped’ so the farmers of future society can proclaim a wholesome and a good healing of society.

Information gained by vivisection is ‘false science’. Nothing is acquired by unlawful means, such wicked facts gleaned from vivisection equal ‘aggressive selfishness’. Violationism of live animals is ‘wicked science’, and such hellish facts belong to ruin, not to life.

Why stop with animals?

What enthronement of science over weak sentiments. The rights of science are not the rights of man. Science is not ‘irrespective of good and evil’. Science has no rights but to be good and honest.

Science has no ‘special dignity’. The foolishness of the ‘dignity of science’, the falsity of the ‘rights of science’. Science has no spiritual perception, and has to vivisect a system of Nature to ‘get at it’. Like a fatal disease, science abuses and slowly kills the living. How can you study life if you have to break the vase to record the spilt phenomena?

Why can’t they use their minds like astronomers or mathematicians?

A beaver’s lungs are adapted for a beaver’s life and do not tell us about the adaption of human lungs. Dissect dead bodies to gain your anatomy and your physiology. Vivesecting live animals destroys what science proposes to study, and the knowledge gained is the bloody consciousness of a false physiologist.

Gaining inhuman facts with great pride is disgraceful and represents a carved obscene idol of the laboratory.

So the violationalists are exposed and compared to occult Egyptian beliefs, where beasts and men are commingled, where beasts are considered sacred and consecrated to destructive rites. The artificial results obtained are subject to secrecy with uncommon terminology, unobserved by the common population, determined on the subjugation of the human mind, based on the eternity of scientific fame, a mental mummy, jealous, cruel, privileged, anti human, and reflecting a degenerate past.

Rites previously kept for priests are now enshrined in text books for medical students, and as the cult grows all sorts of animals are now destroyed alive.

Chloroform and anesthetics make violationists feel ‘all right’ as live animals writhe for hours on the altars of science. Violationists are partially demonised. Justified by their ‘artificial science’, evil curiosity and financial gain, this is a science dying bit by bit by its own abominations, causing a stupefaction of the human mind.

Homeopathy has forced the revolution and witnessed the decay of  old medicine only to witnesses the birth of atrocity.

The worst offenders on trial for these dreadful crimes sit on Royal Commissions to cheat good as evil goes free.

Vivisection ‘improves the skill of the surgeons’, so it is allowed. But such monstrous acts destroy the heart, the hand and the mind and the conscience of the perpetrators.

The violence of materialism loses faith in spiritual means of cure and derides these as nothings, remaining closed to love.

The violence of materialism adds fear, panic and terror to disease and is carefully blind to the process of cure.

The violence of materialism resorts to drugging and surgery, uncontrolled by conscience and reveling in the obstinate rejection of mild and efficient means of cure.

Vivisection inures the mind to cruelty and imparts an insane ambition and greed for fame and money. Thus medical education explodes! Where is ‘do no harm?’

The honoured priesthood of scientism resemble Aztecs in their artificial temples of violation and they are an evil religion.

The horror of Royal Commissions enshrines the maltreatment of women, the abuse of soldiers, the violation of living creatures - so now horror beats in the public heart - and marks a public advance in the confusion of good and evil - state sanction of evil and public sin condones such evil as valuable public servants, with official guise.

Tolerated villainies debase society. Scientism denies common sense and creates a factory and an arsenal of cruelty out of the denial. Whatever common bad men do with kicks and cudgels is now ridiculous in comparison.

The transmission of evil into society perpetrates acts of cruelty and terrorism and wars as one wickedness flows into another.

The prosecution of the pleasures and rights on unruled minds start as tiny desires and end in great massacres and Nations emptied of their own minds, wars, murder, aggrandisement and self deification flow from the initial evil error.

Emanuel Swedenborg explains it all, as this disease tracks from one human to all humans.

This is how disease begins, one malignant germinal spot grows in visible malice. So germs of wickedness convert all to malice.

Vivisection thus threatens social order. Cold, red handed scientism is now dressed for fashionable society. The plain fact is that there are men amongst us who cannot be trusted, and like Macbeth they ‘have murdered sleep’.

Their evils prevent any spiritual views coming into existence and we are now all dead bodies.

What is the difference between a dead body and a live body?

The violationists lust for knowing at any price is high indeed.

We no longer have spirit or soul.

This is necromancy and biomancy.

The living are summoned by the dead for the purpose of killing.

The above summary of the first 68 pages of James John Garth Wilkinson’s book On Human Science, Good and Evil, and its works: and on Divine Revelation and its Works and Sciences written in 1876, a book which actually contains 590 pages.

James John Garth Wilkinson continues in this vein for another 50 pages before turning his attention to the New Science defined by Emanuel Swedenborg.

James John Garth Wilkinson ends the book with an essay on the sacredness of all forms of life, reflecting that all life deserves protection from cruelty, and that even a rat or a scorpion has a right to such protection.

Such deliberate evil cruelty is unnatural in a natural world, and unknown in any other species but human kind.

These are clear principles, if our law givers could understand this.

Science has no natural right to tear living creatures limb from limb for mere curiosity and gain.

Torturers of any life torture all life and are life haters.