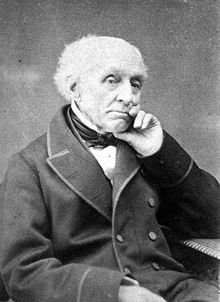 Holland was a cousin of the novelist Elizabeth Cleghorn Gaskell and nephew of the potter Josiah Wedgwood, and a distant relative and close friend of Charles Darwin (_A Natural Calling: Life, Letters and Diaries of Charles Darwin and William Darwin Fox. _Anthony W. D. Larkum. Springer, 2009. Page 201).

In Medical Notes and Reflections, _and his Chapters on Mental Physiology_ 3rd Edition 1855, contained several allusions to homeopathy, that orthodox medicine is unscientific and has no principle to guide it, on matching symptoms to the remedy, observing primary and secondary effects of the remedy, though John James Drysdale is rather crushing of Holland’s views in his review. Lord Holland both used and supported homeopathy, and through Francois Pierre Guillaume Guizot he assisted the establishment of homeopathy in Paris (*see below ‘Of Interest Section’).

Holland believed that the collection of medical statistics was the ‘most secure path into the philosophy of medicine‘,

Holland was impressed by Charles Babbage (the teacher of Mary Everest Boole, the daughter of his friend homeopath Thomas Roupell Everest), and he knew Pierre Simon de Laplace (who also knew Mary Everest Boole as a little girl when she spent ten years living in Paris as a child, and where she knew Samuel Hahnemann),

Charles Darwin consulted Holland in 1840, 1849 and 1850, to no avail, as Holland was baffled by Charles Darwin’s symptoms, so Charles Darwin set off the see James Manby Gully for his ’miraculous cure’ by hydrotherapy and homeopathy.

Henry Holland was the Physician of:

Queen Victoria (who was a patient of James Manby Gully),

Prince Albert (who came from a family tradition of homeopathy, and when he came to England to marry Queen Victoria, he renewed the Royal patronage of homeopathy),

Robert Peel (who was an enthusiastic fan of homeopathy and considered a marble bust of Samuel Hahnemann to be ‘prized beyond all the works, foreign or national, in his gallery‘),

Henry Holland was a relative of Elizabeth Cleghorn Gaskell (a close friend of many homeopathic supporters),

Henry Holland was a friend of:

George Hamilton Gordon 4th Earl of Aberdeen (who was an advocate of homeopathy, and a patient of James Manby Gully, who he described as the ‘… most gifted physician of the Age…’),

Lord Byron (who was a friend of the Countess of Blessington, Frederick Hervey Foster Quin, Mary Shelley),

With thanks to the splendid summary of the biography of Henry Holland taken from Holland’s autobiography Recollections of Past Life, by Craig Thornber:

Peter Holland was the uncle of Elizabeth Cleghorn Gaskell, the author. In his autobiography, Henry states that he had few recollections of his first ten years in Knutsford beyond occasional visits to his maternal grandmother at Newcastle under Lyme and her brother, Josiah Wedgwood, at Etruria.

Henry came into contact with another of Josiah Wedgwood’s grandsons, Charles Darwin, with whom he had a long and close friendship.  So, even from this early period in his life Henry seemed destined to make friends with the great men of his day.

Henry’s earliest education was two years at a school in Knutsford.  At this period he was attracted to the idea of a military career having witnessed sword exercises when a troop of yeomanry was raised in the town.  This is presumably a reference to the Cheshire Yeomanry Cavalry, founded by Sir John Fleming Leicester of Table in 1797.

He recalls too his visits to his paternal grandfather, Samuel Holland, at the house at Sandlebridge between Knutsford and Alderley.

In January 1799, at the age of 11, Henry went to school for four years with his relative, Rev. Wm. Turner, in Newcastle upon Tyne .  The journey awakened his love of travel and he recalled the thrill of passing over Blackstone Edge.  He saw the sea for the first time from the cliffs at Tynemouth Castle and was fascinated by his first view of ships.

It was while he was at Newcastle that Henry had his first contact with science.  He attended two short courses on Chemistry and Electricity by a travelling lecturer.  Nitrous acid gas or laughing gas (now called nitrous oxide) had just been discovered and he was a witness to a demonstration of its effects.

Henry’s curiosity and his early love of excursions is shown by his visits to collieries and chemical factories on the banks of the Tyne.

In 1803 Henry went for a year to the school of John Prior Estlin at St Michael’s Hill in Bristol.  There he became good friends with Richard Bright, later famous for his identification of Bright’s Disease.  At the completion of his year, Henry returned to Knutsford entirely on foot.  While journeys of this nature were commonplace, it says much for Henry’s character that he should make such a trip at the age of 15.

In the expectation that it may lead to a life of travel, Henry had the idea of becoming a merchant.  His father was reluctant to support him in this ambition but in 1804 he was apprenticed to a Liverpool merchant with permission to study at Glasgow University in the winter months.

At the conclusion of his second session, in 1806, he bought a release from his articles and decided to go into medicine.  He had six months before starting medical studies at Edinburgh and was employed by the Board of Agriculture, which was completing a series of County Reports.

Through the suggestion of Sir John Stanley, Henry was employed on the report for Cheshire and received £200 for his labours.  As a gap year project for a student, this was a remarkable achievement.

It was at this time that he attracted the notice of Lady Stanley, whose husband had also been involved in the report on Cheshire.  She was very perceptive, for Henry rose to prominence largely through his social skills but made no great original contributions to medicine.

Edinburgh was then the medical school of highest repute and Henry joined in October 1806 at the age of 18.  While a student, he made his first trip overseas in 1810, when he visited Iceland with Richard Bright and Sir G. Mackenzie.  They were the first people to take smallpox vaccine to the island.

With the intervention of two winters in the London Hospital Schools (Guy’s and St Thomas’s) he passed the three sessions in Edinburgh necessary to graduate in the autumn of 1811. Henry wrote a Latin thesis on the diseases of Iceland for his graduation.

While at Edinburgh, he met many men who later became prominent, including Walter Scott, with whom he maintained contact in London and at Abbotsford.

Henry Holland was too young to be admitted to the College of Physicians at that time so he arranged to undertake some travel abroad.  Early in 1812 he set out for an 18 month journey visiting Portugal, Spain, Greece and Turkey.  Three months were spent at a military hospitals in Portugal helping with the wounded from the Peninsula War.

His experiences in Europe and the near East were a novelty at a time when the Napoleonic Wars had restricted travel for several years.  His new social contacts led to an invitation to attend the Princess of Wales as physician on her intended residence on the Continent.  He left England in 1814 with her party and passed a year in Germany, Switzerland and Italy, mixing everywhere with royalty and high society.  He returned in 1815 to publish his travels…

Just after the Battle of Waterloo, Henry made a short trip to France, Belgium and Holland.  In Paris, which was garrisoned by the English and Prussian armies, he witnessed a military show in which 30,000 English and Hanoverian troops repeated on the plains of St. Denys some of the manoeuvres of the battle of Salamanca, with Arthur Wellesley 1st Duke of Wellington commanding in person.

In 1818, when returning from Spa, he visited Paris again…

Henry was called as a witness at the trial of Queen Caroline before the House of Lords in August 1820 but he passes over this episode very briefly in his autobiography.  However, he noted that hardly any of those involved in the trial “were familiar in foreign usages” implying that some of Queen Caroline’s reported behaviour was misinterpreted.

In addition he states, “A remarkable fortune attended on the whole number of these great lawyers.  Six of them attained peerages.”

Henry Holland was one of Queen Caroline’s physicians in her final illness. That Henry was a product of his time in relation to treatment is evident from the records.  She had 3 pints of blood removed by her physicians. William George Maton, was the most senior: he had attended the Duke of Kent.  The other physicians at the outset of the illness were P Warren, and Henry Holland…

In 1834, Henry married Saba, the daughter of the celebrated cleric and humorist, the Revd. Sydney Smith.  They had two daughters.  Saba died on 2 November 1866.

Lady Holland inherited much of her father’s wit and wrote his memoir which was published in 1855.

Henry travelled abroad every year from the age of 20 to 85. He died at his London home in Brook Street on 27 October 1873 on his 85th birthday, having just returned from a trip to Moscow and Rome.

*From http://www.ebay.co.uk/itm/1840-FRANCOIS-GUIZOT-to-Lord-Holland-Homeopathy-Dr-J-Rutherford-Russell-/311190182140?pt=LH_DefaultDomain_0&hash=item48746158fc [This letter datedWednesday 19th July 1840* _is from the personal papers of John Rutherford Russell from Francios Pierre Guillaume Guizot to Henry Holland. In the years just preceding this, Francois Pierre Guillaume Guizot had been Ambassador to England and was therefore living in London. Henry Holland used homeopathy and he is quoted in John Rutherford Russell‘s Classic 1831 work on homeopathy. Francois Pierre Guillaume Guizot introduced works on homeopathy into France and authorised Samuel and Melanie Hahnemann to practice homeopathy in Paris in 1835  ‘… _ My dear Lord Holland, I am enclosing a very warm recommendation for Mr. Turnbull, addressed to Mr. Abraham Dubois, member of our House of Commons, from Granville.  I am asking him to do everything in his power to ensure that Mr. and Mrs. Turnbull receive all the support and welcome they deserve in Granville.  Our session is finished so Mr. Abraham Dubois should now be back in Granville.  If not, Mr. Turnbull could either wait until he returns or send my letter to him in Paris. As I am sure you are aware, my dear Lord, I am always happy to be able to do something to help. Best wishes, Guizot*…’