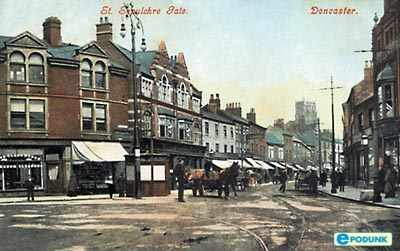 The St. James Homeopathic Hospital Doncaster (photo from PODUNK site), at the junction of St Sepulchre Gate Without and Cleveland Street, Doncaster, opened in 1852.

It was built to be a purely homeopathic hospital and dispensary by George Dunn,

1852 - the hospital for the use of the sick and poor of the area was conceived, organised and erected due to the good offices of George Dunn, who had determined to build such a hospital after several severe railroad accidents occurring locally, when George Dunn discovered there was nowhere to house the injured.

The land was donated by Frederick William Fisher of Westfield, Doncaster, solicitor, (a triangular piece of land at the junction of St Sepulchre Gate Without and Cleveland Street, Doncaster), and a mortgage was obtained for the property from Joshua Walker, Oakwell, Birstal, gentleman, John Walker, Oakwell, Birstal, gentleman, Edward Micklethwait, Grimsby, surveyor, for a Consideration of £300 on 21.8.1852,

The foundation stone was laid on 26.5.1852 by George Dunn and his son Walter Hahnemann Dunn, and the modern, purpose built hospital was finished and opened 8 months later.

The partner of George Dunn was George Blagden of Warmsworth, the architect was Haughton, the contractor was Elworth, W S Smith fitted the gas instilations, Farr provided the kitchen equipment, Slater fitted the heating system, Walkinshaw supplied the ironmongery, H Tilbury donated a painting of the Good Samaritan, and Woodmassey provided the clocks.

The building was paid for almost entirely by George Dunn, though subscriptions were received from many local residents, including Sir Joseph Copley, Lord Fitzwilliam Viscount Milton, Battie Wrightson and many others.

The local allopathic physicians opposed the hospital with their usual full vigour, objecting vociferously to George Dunn’s sole funding of the institution, stating that its funding by a solitary philanthropist ’was a delusion too absurd to be entertained’, and refused to believe that ’any hospital was necessary’. However, as soon as the homeopathic hospital was up and running, the local allopaths began fund raising to build a hospital, claiming that a hospital was ’urgently required‘.

The official opening of the hospital was followed by a supper, organised by Joseph Foster, for the workmen and their families, with the Locomotor Band employed to entertain them for the rest of the evening.

The hospital was located at the western entrance to the town, near to the Great Northern Railway Company.The building was triangular with the entrance, facing Cleveland Street, located centrally, the left wing contained two lofty and spacious wards with a casualty ward, with offices in the right wing, plus two other rooms capable of being used as wards should the need arise, and also the bath rooms which enjoyed hot and cold running water, and showers, vapour baths and Turkish bath facilities. The whole building was equipped with gas light and heated by hot pipes throughout and carefully ventilated.

There was a tasteful garden laid out behind, including a kitchen garden and ample cellars, on which is was intended to build another wing of the hospital at a later date.

The hospital was open for acute disease, and for accidents, and although it initially only had 22 beds, the additional wing would increase this to 50 beds when it was finally built. The building also housed a self supporting homeopathic dispensary, and the hospital was owned and run by George Dunn, with the assistance of William Hempson Denham as House Surgeon, Mrs. Mullins is the Matron, and Sergeant Lane late of the 14th Light Dragoons is the porter.

George Dunn was an active member of The Northern Homeopathic Medical Association, who held meetings at the hospital, beginning with the inaugural address by George Dunn at the new hospital in 1853, which included details of a few cases from the 255 patients who had been seen at the hospital to date.

All of the patients were treated free of charge.

1864 - The hospital is fully self supporting and maintained by subscriptions, and was so successful that when the local allopaths of Doncaster asked for £1000 to build another hospital, the Town Council turned them down on the basis that they ‘already had a hospital’. At this time, George Dunn was the only homeopath in Doncaster, and he repeatedly offered to let the allopaths share in the facilities of the hospital, an offer which was always haughtily refused.

1866 - the total number of patient seen at the hospital was 6000, not including the employees of the Great Northern Railway of which George Dunn was the Medical Officer, (456 patients seen in 1865),

1866 - Cholera broke out in Doncaster, and the hospital was placed unconditionally at the disposal of the local people, during which time allopaths and homeopaths worked side by side together. To honour George Dunn for his services to the town during the outbreak, the Doncaster Board of Guardians awarded him an Honorarium of £5.

1868 - Herbert Wright Nankivell was a Surgeon at the hospital,

1874 - Edmund Becket Lord Grimthorpe stepped in to assist in the financing of the hospital,

1963 - the hospital building was demolished