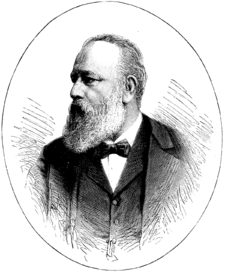 As a surgeon, he is generally regarded as the founding father of modern abdominal surgery.

As a musician, he was a close friend and confidante of Johannes Brahms, a leading patron of the Viennese musical scene, and one of the first to attempt a scientific analysis of musicality,

Billroth worked as a doctor from 1853-1860 at the Charité in Berlin. In Berlin he was also apprenticed to Carl Langenbuch. From 1860-1867 he was Professor at the University of Zurich and director of the surgical hospital and clinic in Zurich.

While in Zurich, Billroth published his classic textbook Die allgemeine chirurgische Pathologie und Therapie (General Surgical Pathology and Therapy) (1863). At the same time he introduced the concept of audits, publishing all results, good and bad, which automatically resulted in honest discussion on morbidity, mortality, and techniques - with resultant improvement in patient selection.

He was appointed professor of surgery at the University of Vienna in 1867 and practiced surgery as chief of the Second Surgical Clinic at the Allgemeine Krankenhaus (Vienna General Hospital).

He was directly responsible for a number of landmarks in surgery, including the first esophagectomy (1871), the first laryngectomy (1873), and most famously, the first successful gastrectomy (1881) for gastric cancer, after many ill-fated attempts. Legend has it that Billroth was nearly stoned to death in the streets of Vienna when his first gastrectomy patient died after the procedure.

Billroth was also instrumental in establishing the first modern school of thought in surgery. Among his disciples were luminaries such as Alexander von Winiwarter, Jan Mikulicz-Radecki and John Benjamin Murphy. William Stewart Halsted’s pioneer surgical residency program was greatly influenced by Billroth’s own methods of surgical education.

Billroth was a talented amateur pianist and violinist. He met Johannes Brahms in the 1860s, when the composer was a rising star of the Viennese musical scene. They became close friends and shared musical insights. Johannes Brahms frequently sent Billroth his original manuscripts in order to get his opinion before publication, and Billroth participated as a musician in trial rehearsals of many of Johannes Brahms’ chamber works before their first performances. Johannes Brahms dedicated his first two string quartets, Opus 51, to Billroth.

Billroth and Johannes Brahms, together with the acerbic and influential Viennese music critic Eduard Hanslick, formed the core of the musical conservatives who opposed the innovations of Wilhelm Richard Wagner and Franz Liszt.

In the conflict, known as the War of the Romantics, Billroth supported Johannes Brahms, but was always fair and measured in his comments. ”Wilhelm Richard Wagner was indeed a very considerable talent in many directions,” he wrote in 1888.

Billroth started an essay called “Wer ist musikalisch?” (“Who is musical?”), which was published posthumously by Eduard Hanslick. It was one of the earliest attempts to apply scientific methods to musicality.

In the essay, Billroth identifies different types of amusicality: tone deafness, rhythm-deafness, harmony-deafness, that suggest the different cognitive skills involved in our perception of music.

Billroth died in Opatija, Austria-Hungary, before he could complete the research.

Excelling at both his vocation and his avocation, Billroth never saw science and music as being in conflict. On the contrary, he considered the two to complement each other. “It is one of the superficialities of our time to see in science and in art two opposites,” he wrote in a letter. “Imagination is the mother of both.”