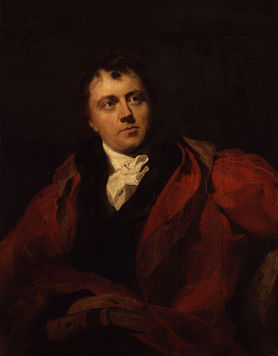 {::}** Sir James Mackintosh** (1765-1832) was a Scottish jurist, politician and historian. His studies and sympathies embraced many interests. He was trained as a doctor and barrister, and worked also as a journalist, judge, administrator, professor, philosopher and politician.

James Mackintosh was a relative of Charles Darwin, as he was married to Kitty Allen, the sister in law of Josiah II and John Wedgwood, and his daughter Frances ‘Fanny’ Emma Elizabeth Mackintosh, married Hensligh Wedgwood.

James Mackintosh was a friend of Samuel TaylorColeridge,

James Mackintosh’s granddaughter Mary Erskine was head nurse in the Naval Hospital at Therapia during the Crimean War, and looked after Florence Nightingale while she recovered from illness.

From http://en.wikipedia.org/wiki/James_Mackintosh James Mackintosh was born at Aldourie, 7 miles from Inverness. Both his parents were from old Highland families. His mother died while he was a child, and his father was frequently abroad, so he was brought up by his grandmother, and then schooled at Fortrose Seminary academy.

He went in 1780 to King’s College, University of Aberdeen, where he made a lifelong friend of Robert Hall, later a famous preacher. In 1784 he began to study medicine at Edinburgh University. He participated to the full in the intellectual ferment, but did not quite neglect his medical studies, and took his degree in 1787.

In 1788 Mackintosh moved to London, then agitated by the trial of Warren Hastings and the first lapse into insanity of George III. He was much more interested in these and other political events than in his professional prospects; and specially interested in the events and tendencies which caused or preceded the Revolution in France.

In 1789 he married Catherine Stuart, whose brother Daniel later edited the Morning Post. His wife’s prudence counteracted Mackintosh’s own unpractical temperament, and his efforts in journalism became fairly profitable. They had a son, who died in infancy, and three daughters:

In 1797 his wife died, and next year he married Catherine Allen (died 6 May 1830), sister in law of Josiah II and John Wedgwood, through whom he introduced Samuel TaylorColeridge, to the Morning Post. They had two sons, one of whom died in infancy, and two daughters:

Meanwhile, Mackintosh was soon absorbed in the question of the time; and in April 1791, after long meditation, he published his Vindiciae Gallicae, a reply to Edmund Burke’s Reflections on the French Revolution. It was the only worthy answer to Edmund Burke that appeared in Edmund Burke’s estimation.

It placed the author in the front rank of European publicists, and won him the friendship of some of the most distinguished men of the time, including Burke himself. The success of the Vindiciae finally decided him to give up the medical for the legal profession. He was called to the bar in 1795 and gained a considerable reputation there as well as a tolerable practice.

As a lawyer his greatest public efforts were his lectures (1799) at Lincoln’s Inn on the law of nature and nations, of which the introductory discourse was published and ran to several editions; the resulting fame helped open doors for him later in life.

Mackintosh was also famed for his speech in 1803 defending Jean Gabriel Peltier, a French refugee, against a libel suit instigated by Napoleon Bonaparte

He was appointed Recorder (chief judge) of Bombay, taking up the post in 1804. He was not at home in India, where he became ill, was disappointed by his literary progress with the mooted History of England, and he was glad to leave for England in November, 1811.

He courteously declined the offer of Spencer Perceval to resume political life under the auspices of the dominant Tory party, though tempting prospects of office in connection with India were opened up. He entered Parliament in July 1813 as a Whig. He was the member for Nairn until 1818, and afterwards for Knaresborough, till his death.

In London society, and in Paris during his occasional visits, he was a recognized favourite for his genial wisdom and his great conversational power. On Madame de Stael’s visit to London he was the only Englishman capable of representing his country in talk with her.

Another close friend esteemed by Mackintosh was Richard Sharp (also known as Conversation Sharp) and both men belonged to the famous Whig conversation club, the King of Clubs.

Mackintosh’s parliamentary career was marked by the same wide and candid liberalism as his private life. He opposed the reactionary measures of the Tory government, supported and afterwards succeeded Samuel Romilly in his efforts for reforming the criminal code, and took a leading part both in Catholic emancipation and in the Reform Bill. But he was too little of a partisan, too widely sympathetic and candid, as well as too elaborate, to be a telling speaker in parliament, and was surpassed there by more practical men whose powers were incomparably inferior.

From 1818 to 1824 he was professor of law and general politics in the East India Company’s College at Haileybury. While there, on 12 August 1823, Mackintosh wrote a two-sheet letter from Cadogan Place, London (England) to James Savage asking for source material for James Savage’s edition of The History of Taunton by Joshua Toulmin.

In the midst of the attractions of London society and of his parliamentary avocations Mackintosh felt that the real work of his life was being neglected. His great ambition was to write a history of England; he also cherished the idea of making some worthy contribution to philosophy.

It was not till 1828 that he set about the first task of his literary ambition. This was his Dissertation on the Progress of Ethical Philosophy, prefixed to the seventh edition of the Encyclopædia Britannica.

The dissertation, written mostly in ill-health and in snatches of time taken from his parliamentary engagements, was published in 1831. It was severely attacked in 1835 by James Mill in his Fragment on Mackintosh.

About the same time he wrote for the Cabinet Cyclopaedia a History of England from the Earliest Times to the Final Establishment of the Reformation. His more elaborate History of the Revolution, for which he had made great researches and collections, was not published till after his death.

A privy councillor since 1828, Mackintosh was appointed Commissioner for the affairs of India under the Whig administration of 1830.

The premature death of Sir James Mackintosh at the age of sixty-seven was attributed to a chicken bone becoming stuck in his throat, causing a traumatic choking episode. Although the bone was eventually removed, his suffering continued until he died a month later on 30 May 1832 and he was buried in Hampstead churchyard, having lived for much of his later life in London at 15 Langham Place.

A Life, by his son Robert James Mackintosh was published in 1836. An edition of his works, in three volumes, (apart from the History of England) was published in 1846, containing his ethical and historical dissertations, a number of essays on political and literary topics, reviews, and other contributions to periodical publications, and speeches on a variety of subjects delivered at the bar and in parliament.

H D Appleton was a homeopath on New York City in 1852, and in Washington in 1857, and he submitted cases to The North American journal of homeopathy, Volume 5,

John W M Appleton was a homeopath in Boston in 1865,

Writing from Charleston in 1867, John W M Appleton said: Homeopathy has not much of a record in this end of the state in the forty years of my time. I came to Kenawha in August, 1865, having resigned from the army in that month.

I had charge of a coal mine and employed a number of people. Called upon to practice among them, I took out a US license. None of the people had any knowledge of our system, and the patients getting well with no medicines but spoonfuls of clear water made some of them think it some kind of conjuring.

I have never depended on practice entirely for a livelihood, but have never entirely ceased to practice when called on. Moving to Charleston from the mine and engaging in manufacturing, patients still come to me. and in 1882, moving to Salt Sulphur Springs, Munroe county, West Va., I still do what I can for the country people.

Walter Frederick Appleton 1879 - 1914 was a graduate of the New York Homeopathic Medical College, who practiced in New Jersey,

Nina Hargous Appleton, wife of William Appleton of Boston was a sponsor of homeopathy in 1890, donating a large sum which enabled the foundation of the Hargous Memorial Hahnemann Hospital in Rochester (now the Highland Hospital):

In August, 1890, Mrs. Appleton of Boston, daughter of Louis Stanislaus Hargous (brother of Louise Hargous, Professor of French and Spanish at Princeton) and Susan Jeanette Hargous, gave the trustees the sum of $35000 as a memorial of the professional services of Joseph A Biegler to her family, and also as a means of expressing her gratitude to him and to homeopathy.

William Henry Appleton began his career in publishing in 1838. In 1848 he became the senior member of the firm of D Appleton & Company, in partnership with his brother John Adams Appleton; they were joined in partnership by three younger brothers. W. H. Appleton became the firm’s London representative in 1853.

He was active in the struggle for an international copyright, and served a term as president of the American Publishers Copyright League. His firm published works by a range of noteworthy authors, including Lewis Carroll, Arthur Conan Doyle, Charles Darwin, Thomas Henry Huxley, Herbert Spencer, and John Stuart Mill, as well as leading American scientists and philosophers of his era.