In 1945, the William Budd Health Centre was opened in Bristol, and a ward at the Bristol Royal Infirmary bears his name, and a 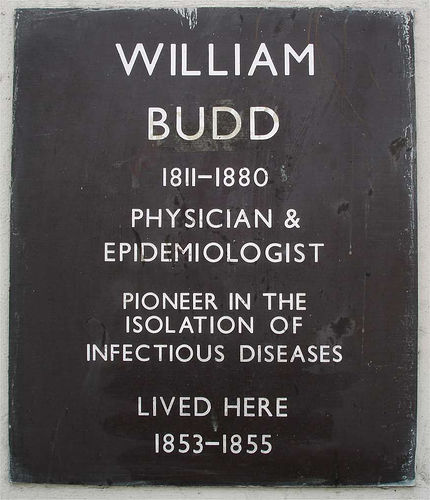 Plaque has been placed at 89 Park Street, Bristol in his honour,

John Snow first discovered the cause when he linked it to a well in Broad Street, Soho, London 1854.  John Snow beat William Budd to the water theory of transmission of cholera by only 10 days.

However, although William Budd’s thesis was based on more thorough surveys of rural outbreaks, he made the mistake of proposing a fungal cause… (William Budd correctly identified the contagious nature of typhoid and successfully ‘stamped out’ an epidemic in Bristol in 1854),

William Budd was the son of Samuel Budd, surgeon of North Tawton, and his wife Catherine Wreford. Of nine children, eight were boys; of those I have been able to trace so far most were medical doctors - the ninth, Francis Nonus Budd, was a barrister - and William Budd mentions the assistance of his brothers during the outbreak.

Other researchers cite a paper by Samuel Budd concerning typhoid, but I have not as yet found this publication, and do not know if it was by Samuel Budd snr. or jnr. William’s son George Turnavine Budd also rose to eminence in the field of medical research…

William Budd - (described as ’the greatest physician of the West of England’)) objected to his name being associated with ‘worm lozenges’ in Callington Market, and proceeded to ’administer sundry kicks on the nethermost person of the unfortunate quack’

William Budd has been described by his biographer, Michael Dunnill, as Bristol’s most famous physician. He was born in 1811 into a large Devon medical family; his father and five of his brothers were also physicians.

During his training in medicine William spent three separate years in Paris, interrupted by his catching typhoid fever.  He qualified at Edinburgh as a doctor of medicine and won a gold medal for his thesis.

In 1841 he moved to Bristol and became a consulting physician to the Bristol Royal Infirmary in 1847.  He was a genial, vivacious, ebullient man, fond of good food, good wine and female company.  An enthusiast in his work he could sometimes be seen running from his home in Park Street to the Infirmary so that he could see more quickly how his patients were getting along.

His interest in epidemiology led him to play an active role in the development of the Bristol Water Company.

Apart from his pioneering work on cholera, 1849, he described the contagious nature and prevention of Diphtheria, 1861; Anthrax, 1862; Tuberculosis, 1867, Scarlet Fever, 1869, and he also studied cattle plague and sheep smallpox.

He is perhaps most renowned for his work on the waterborne transmission of Typhoid 1873.  He died when he was 69 having suffered a stroke six years earlier, which had left him hemiplegic.

William Budd and Richard Budd submitted cases and articles to various homeopathic publications, and William Budd submitted many articles to allopathic Journals, and he wrote On the Symetry of Disease, Typhoid fever, its nature, mode of spreading, and prevention, Malignant cholera: its mode of propagation and its prevention, Rules for the prevention of typhoid fever, On the occurrence of the malignant pustule in England, Memoranda on Asiatic cholera: its mode of spreading, and its prevention, Cholera and disinfection: Asiatic cholera in Bristol in 1866, On the Propogation of Typhoid Fever, Diphtheria, A report on the progress of anatomy and physiology in the year 1843-1844, Scarlet fever: and its prevention, Variola ovina, sheep’s small-pox: or, The laws of contagious epidemics illustrated by an experimental type, Can the government further beneficially interfere in the prevention of infectious diseases?, The Siberian cattle-plague; or, The typhoid fever of the ox, On the causes and mode of propagation of the common continued fevers of Great Britain and Ireland, Researches on gout,

’George Turnavine Budd … was a maniacal enthusiast, full of energy and wild ideas, and the practice must have been one of the most curious and unethical that has been known.’