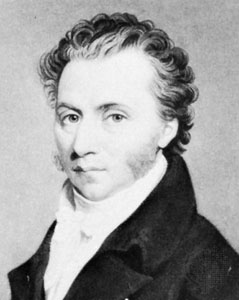 Thomas Attwood 1783 - 1859 was a British economist, the leading figure of the underconsumptionist Birmingham School of economists, and, as the founder of the Birmingham Political Union, a leading figure in the public campaign for the Great Reform Act of 1832.

Attwood was a patient of hydrotherapist Edward Johnson (whose son Walter Johnson practiced homeopathy at Malvern) at Malvern.

Attwood was a colleague of John Stuart Mill,

He founded the Birmingham Political Union in 1830. This was a political organization campaigning for cities, and large towns such as Birmingham, to be directly represented in Parliament.

The Birmingham Political Union was foremost among groups lobbying the government for the passage of the Reform Bill to achieve this aim. After its success he became the first Member of Parliament (MP) for Birmingham on 12 December 1832, a position he held until 1839.

He died in Malvern, Worcestershire.

Thomas Charles Attwood was a Chemist in London,