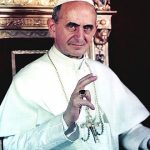 Pope Paul VI was the homeopathic patient of Antonio Negro, Pope Paul VI awarded him the Order of St. Gregory for his work in homeopathy.

Pope Paul VI succeeded Pope John XXIII, who had convened the Second Vatican Council, he decided to continue it. He fostered improved ecumenical relations with Orthodox, Anglicans and Protestants, which resulted in a number of historic meetings and agreements.Montini served in the Vatican’s State Department from 1922 to 1954. While in the State Department, Montini and Domenico Tardini were considered as the closest and most influential co-workers of Pope Pius XII, who named him in 1954 Archbishop of the largest Italian dioceses, Milan, a function which made him automatically Secretary of the Italian Bishops Conference.

Pope John XXIII elevated him to the College of Cardinals in 1958, and after his death, Montini was considered the favourite successor.

He took on the name Paul, to indicate a renewed worldwide mission to spread the message of Christ. He re-opened the Second Vatican Council, which was automatically closed with the death of Pope John XXIII and gave it both priorities and direction.

After the Council concluded its work, Paul VI took charge of the interpretation and implementation of its mandates, often walking a thin line between the conflicting expectations of various groups within the Roman Catholic Church.

The magnitude and depth of the reforms affecting all areas of Church life during his pontificate exceeded similar reform policies of his predecessors and successors.

Paul VI was a Marian devotee, speaking repeatedly to Marian congresses and mariological meetings, visiting Marian shrines and issuing three Marian encyclicals. Following his famous predecessor Ambrose of Milan, he named Mary to be the Mother of the Church during the Vatican Council.

Paul VI sought the dialogue with the world, with other Christians, religions, atheism, excluding nobody. He saw himself as a humble servant for a suffering humanity and demanded significant changes of the rich in American and Europe in favour of the poor in the Third World.

His positions on birth control and other issues were controversial in Western Europe and North America, but applauded in Eastern and Southern Europe and Latin America.

His pontificate took place during sometimes revolutionary changes in the world, student revolts, the Vietnam War and other upheavals. Paul VI tried to understand it all but at the same time defend the Deposit of Faith as it was entrusted to him. Paul VI died on 6 August 1978, the Feast of the Transfiguration. The diocesan process for beatification Paul VI began on 11 May 1993.