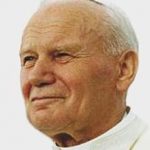 Pope John Paul also beatified Antoine Frederic Ozanam, the brother of homeopath Charles Ozanam, who was himself awarded the Order of Saint Gregory the Great by Pope Gregory XVI in 1862,

Pope John Paul II was the second longest documented pontificate; only Pope Pius IX served longer (St Peter the Apostle is reputed to have served for more than thirty years as the first pontiff; however documentation is too sparse to definitively support this).

Pope John Paul II has been the only Polish Pope to date, and was the first non-Italian Pope since Dutch Pope Adrian VI in the 1520s.

Pope John Paul II has been widely acclaimed as one of the most influential leaders of the twentieth century. It is widely held that he was instrumental in ending communism in his native Poland and eventually all of Europe as well as significantly improving the Catholic Church’s relations with Judaism, the Eastern Orthodox Church, and the Anglican Communion.

Though criticised for his opposition to contraception and the ordination of women, as well as his support for the Second Vatican Council and its reform of the Liturgy, he has also been praised for his firm, orthodox Catholic stances in these areas.

He was one of the most-travelled world leaders in history, visiting 129 countries during his pontificate. He was fluent in many languages: Italian, French, German, English, Spanish, Portuguese, Ukrainian, Russian, Croatian, Esperanto, Ancient Greek and Latin as well as his native Polish.

As part of his special emphasis on the universal call to holiness, he beatified 1,340 people and canonised 483 Saints, more than the combined tally of his predecessors during the last five centuries. On 19 December 2009, John Paul II was proclaimed “Venerable” by Pope Benedict XVI.