Orlando Jones was the first homeopath to use Cactus Grandiflorus,

Orlando Jones submitted cases and articles to various homeopathic publications, and to The British Medical Journal, and he also wrote Cholera: its symptoms and treatment, and also Falling markets: their cause,

George William Fox Kinnaird 9th Lord Kinnaird, was a patient of Samuel Hahnemann, a Patron of the General Committee of Management of the Edinburgh Homeopathic Dispensary on the Treatment of Asiatic Cholera in October 1848, alongside many others.

George William Fox Kinnaird 9th Lord Kinnaird was also a Vice President of the London Homeopathic Hospital, and the President of the Hahnemann Medical Institute and Dispensary at Welbeck Street, corner of Bulstrode Street, Manchester Square. 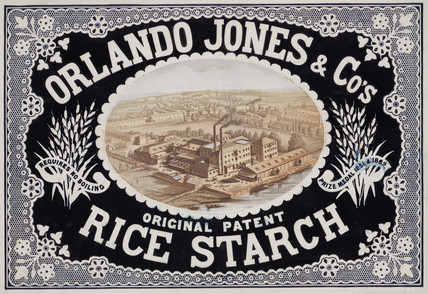 In 1840 Orlando Jones invented a process by which starch could be manufactured from rice.

By this process a much better starch was obtained, both as to colour and purity, and at less cost than by the old method. Before this invention, starch had been made from potatoes, maize, and wheat ; starch made from wheat is the oldest known process, for Pliny mentions it in his Natural History two centuries ago.

When ruffles and frills and full-bottomed wigs were the fashion, large quantities of wheat starch were used. There are about forty-five varieties of rice. Most of these rice plants originated in India, and from that country have spread over the whole of Asia, and to other parts of the world.

Orlando Jones’ invention consisted of the treatment of rice by an alkaline solution, the alkali being used in such a way as to dissolve the gluten without in any way destroying the property of the starch.

In 1848 the firm of Orlando Jones & Co. removed from their works at Whitechapel and built a factory in the York Road, with a frontage to the river.

The Primitive Methodist Chapel in Plough Lane,— In the year 1855, a few Primitive Methodists, residing in the neighbourhood of York Road, with the view of having their hearts knitted more closely together in holy love by Christian fellowship and frayer, met from house to house for this purpose to worship God — in this way they continued to meet till the year 1858, when the firm of Orlando Jones & Co. gave them the use of their Reading Room…

The process of manufacturing starch from rice was discovered and patented about the year 1840 by Mr. Orlando Jones, founder of the house of the same name. His invention consists in the treatment of rice by a caustic alkaline solution during the steeping, grinding and macerating of the grains.

The alkali used is either caustic potash or soda, of such a strength as to dissolve the gluten without destroying the starch; it must consequently vary with the character of the grain and hence the utmost nicety is required.

The Battersea Works of Orlando Jones & Co. were built in 1848, the firm having previously carried on their manufacture in Whitechapel, they are situated on the banks of the Thames near the works of Rice’s Patent Candle Company, and occupy ground extending from the river, to York Eoad; thus the firm possesses facilities of conveyance both by land and water— this latter is particularly valuable to them to enable them to save all dock, landing and warehousing charges.

A large new store *has been recently built on their wharf to which rice is barged direct from the ship. From the wharf also the manufactured article itself is conveyed to the docks for shipment to the Continent and our Colonies, with which a large trade is carried on.

As an illustration of the extent of Orlando Jones & Co.’s operations it may be added tbat the box making department is a little factory in itself, and the machinery employed for the various purposes of sawing, dusting, cleaning, lighting, pumping, stirring, and grinding is driven by steam engines.

It will be obvious that the manufacture of rice starch on a large scale requires no little capital and skill, and takes high rank anion? those industrial enterprises which are so peculiarly the characteristic and the glory of our age and country. Messrs. Orlando Jones & Co’s manufacture has been awarded nine prize medals at International Exhibitions, and the grand distinction of the gold medal of the Acaddmie Nationale of Paris.

These medals have been awarded ‘for introduction of the process,’ ‘for excellence of manufacture’ and ‘for large production.’

It is worthy of note that Messrs. Orlando Jones & Co. are the manufacturers of Chapman’s Patent Prepared Entire Wheat Flour especially distinguished by its richness in earthly phosphates which are essential to the developement of bones and teeth. This farinaceous food for infants, children and invalids is much recommended by the medical faculty.

In 1901 the business was sold to Messrs Coleman, mustard manufacturers, and transferred to their premises at Norwich.

Sir George Barclay Bruce 1821 – 1908 was a British civil engineer. In 1848 he became a partner in the milling firm of __Orlando. Jones and Company, of Battersea,