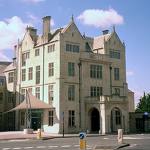 Hamilton Bailey’s father James was born in Forfar in Scotland, and he was educated as a doctor MB ChB Edinburgh 1887. James Bailey married Margaret Bailey (no relation) a nurse who he met at the Edinburgh Royal Infirmary, and together they became missionaries, working in Nablus in Palestine, a dreadful ordeal for the young couple, Margaret’s first child died aged 2 days and she became clinically depressed.

Returning to Britain, James Bailey got a job in Bishopstoke, where they hoped to live more peaceably. However, the industrial revolution and the arrival of the railway had turned this quiet village into a scene of bitter social conflict. Against this backdrop, a son, Hamilton was born, and after 2 years, the family moved to Southport a few miles away.

A daughter, May, was born in Southport, but unfortunately she was a difficult child who was eventually diagnosed with schizophrenia, a source of great shame to the family. They were extremely concerned that it would reflect very badly on his ability to work as a doctor in the local area, so she was ‘kept at home’, and at age 18, she went into a mental institution, St. Francis Hospital in Haywards Heath, and had a frontal lobotomy and was never heard from again. Hamilton was raised as an only child.

In 1908, James Bailey retired to France to cultivate his vineyards, returning occasionally to London to teach at the London Hospital,

Hamilton began work at St. Lawrence College in Ramsgate, and he then worked at the London Hospital. In 1914, Hamilton joined the Red Cross in Belgium, where he survived the German occupation of Belgium, he was repatriated to serve in the Royal Navy, and in 1919, he saw military action in the Battle of Jutland.

In 1924, Hamilton lost a finger due to an infection, a serious loss for a surgeon, which he overcame by the use of a specially designed needle holder.

In 1925, Hamilton Bailey became an Assistant Surgeon at the Liverpool Royal Infirmary, where he met and married Vita Gillender, and he then moved to Dudley Road Hospital in Birmingham, where his son (also called Hamilton) was born. Hamilton senior was by this time an accomplished author and his books became widely acknowledged.

In 1930, Hamilton senior moved to the Bristol Homeopathic Hospital as a Surgeon, where Christopher Osmond Bodman was the homeopath of Walter Melville Wills, and where he became a close friend of Robert Victor Cooke.

In 1931, Hamilton was a Surgeon at the Bath Homeopathic Hospital,

In 1932, Hamilton Bailey moved to the Royal Northern Hospital in London, and he also worked at several other hospitals,

In 1943, his young son was killed in a railway accident, and Hamilton senior withdrew more and more into his writing. He moved to Malaga in Spain, where tragically, he died after surgery for a malignant bowel.