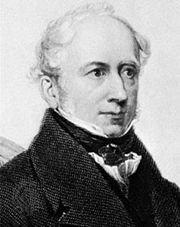 James Montgomery, poet, son of a pastor and missionary of the Moravian Brethren, was born at Irvine in Ayrshire on 4 November 1771, and educated at the Moravian School at Fulneck, near Pudsey in Leeds.

He failed school, became an apprentice baker, before settling in Sheffield in March 1792 as clerk to Joseph Gales on the Sheffield Register newspaper. On July 4th 1794 he launched and edited the Sheffield Iris, and was twice imprisoned (in 1795, and again in

In 1797 he published Prison Amusements; but his first work to attract notice was The Wanderer of Switzerland (1806). It was followed by The West Indies (1809), The World before the Flood (1812), Greenland (1819), and The Pelican Island (1828), all of which contain passages of considerable imaginative and descriptive power, but, according to literary analysts, are lacking in strength and fire.

He himself expected that his name would live, if at all, in his hymns, and in this his judgment has proved true. Some of these, such as For ever with the Lord, Hail to the Lord’s Anointed,his carol, Angels from the Realms of Glory, and Prayer is the Soul’s Sincere Desire, are sung wherever the English language is spoken.

Probably his best known poems are the one commemorating Arnold Winkelried and A Poor Wayfaring Man of Grief. Montgomery was a good and philanthropic man, the opponent of every form of injustice and oppression, and the friend of every movement for the welfare of the race. His virtues attained wide recognition.

From 1835 until his death in 1854 Montgomery lived at The Mount on Glossop Road in Sheffield.