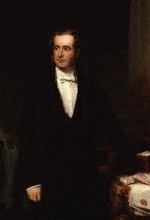 Pelham was an advocate and a patient of homeopathy, and his wife was a patient of Samuel Hahnemann in Paris, and he was a sponsor of Mary Jane Seacole,

Pelham served under George Hamilton Gordon 4th Earl of Aberdeen, Henry Palmerston, Robert Peel, and he was a colleague of Laurence Oliphant, the private secretary to Lord Elgin (who was also patient of Samuel Hahnemann),

Newcastle was the son of Henry Pelham Clinton 4th Duke of Newcastle under Lyme, by his wife Georgina Elizabeth, daughter of Edward Miller Mundy. He was educated at Eton and Oxford.

Newcastle was returned to Parliament for South Nottinghamshire in 1832, a seat he held until 1846, and then represented Falkirk Burghs until 1851, when he succeeded his father in the dukedom.

From 1859 to 1864 he served as Secretary of State for the Colonies in Henry Palmerston’s Liberal administration. Apart from his political career he also held the honorary posts of Lord Lieutenant of Nottinghamshire from 1857 to 1864 and Lord Warden of the Stannaries from 1862 to 1864. He was made a Knight of the Garter in 1860.

The marriage was unhappy and the Duke and Duchess were divorced in 1850, after a considerable scandal in which the Duchess eloped with Horatio Walpole 3rd Earl of Orford, and had an illegitimate child by him.

Newcastle died in October 1864, aged 53, and was succeeded in the dukedom by his eldest son, Henry.

His papers are now held at Manuscripts and Special Collections, The University of Nottingham.