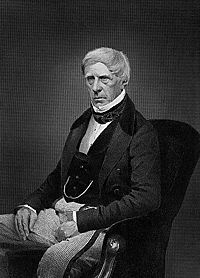 Henry Peter Brougham 1st Baron Brougham and Vaux 1778 - 1868 was a British statesman who became Lord Chancellor of the United Kingdom.

Brougham was an advocate of homeopathy, and in 1860, he offered to fund clinical trials into homeopathy at University College Hospital (Anon, The Lancet London: a journal of British and foreign medicine, surgery, obstetrics, physiology, chemistry, pharmacology, public health and news, Volume 1, (Elsevier, 1860). Page 611) (Brougham was one of the founders of London University), which was turned down out of hand by an allopathic establishment.

Brougham was also interested in spiritualism, and he was a passionate, lifelong anti slavery campaigner, and he was a founder of the The National Association for the Promotion of Social Science (known as the Social Science Association), alongside Rev. William Gover, Founder of the Society for the Diffusion of Useful Knowledge, alongside Mary Fairfax Greig Somerville,

Brougham’s portrait was painted by Samuel Lover, and he was a friend of Augustus de Morgan,

In 1824, Brougham spoke out against slavery, impressing Fanny Allen who wrote to tell the young Charles Darwin all about it, describing Brougham’s speech as the ’most incomparable thing I ever heard’. Brougham was a Member of Josiah Wedgewood II’s Abolition Committee.

Brougham wrote a letter to The Herald of Truth in 1848, pointing out the intolerance of allopathic doctors against homeopaths, and objecting to their withholding of a medical diploma to a newly qualified doctor on the grounds he was a homeopath.

In 1860, homeopath David Wilson wrote to the Editor of The Morning Advertiser offering to assist St. George’s hospital in its desperate financial troubles by offering homeopathy instead of the very expensive allopathic regime.

David Wilson explained that a similar offer had been made by Lord Brougham to University College Hospital, who had 70 beds standing empty for lack of funds. _The Lancet _commented pithily that this offer would not even have been published were it not for the use of the name Henry Edmund Gurney associated with it.

When the offer was refused, David Wilson approached St. Mary’s Hospital with a similar offer, which was also refused. Mrs. Gurney then increased her offer of help from £1000 to £6000, if David Wilson could have access to only 10 beds for his clinical trials, but even this generous offer was still refused.

Brougham was born and grew up in Edinburgh, the eldest son of Henry Brougham, of Brougham Hall in Westmorland, and Eleanora, daughter of Reverend James Syme. The Broughams had been an influential Cumberland family for centuries.

Brougham was educated at the Royal High School and the University of Edinburgh, where he chiefly studied natural science and mathematics, but also law. He published several scientific papers through the Royal Society, notably on light and colours and on prisms, and at the age of only 25 was elected a Fellow.

However, Brougham chose law as his profession, and was admitted to the Faculty of Advocates in 1800. He practised little in Scotland, and instead entered Lincoln’s Inn in 1803. Five years later he was called to the Bar.

Not a wealthy man, Brougham turned to journalism as a means of supporting himself financially through these years. He was one of the founders of the Edinburgh Review and quickly became known as its foremost contributor, with articles on everything from science, politics, colonial policy, literature, poetry, surgery, mathematics and the fine arts.

In the early 1800s, Brougham, a follower of Isaac Newton, launched vicious anonymous attacks in the Edinburgh Review against Thomas Young’s research that proved light was a wave phenomenon that exhibited interference and diffraction, attacks that slowed acceptance of the truth for a decade until Francois Arago and Augustin Jean Fresnel championed Thomas Young’s work.

The success of the Edinburgh Review made Brougham a man of mark from his first arrival in London. He quickly became a fixture in London society and gained the friendship of Charles Grey 2nd Earl Grey and other leading Whig politicians.

In 1806 the Foreign Secretary, Charles James Fox, appointed him secretary to a diplomatic mission to Portugal, led by James St Clair Erskine 2nd Earl of Rosslyn and John Jervis 1st Earl St Vincent. The aim of the mission was to counteract the anticipated French invasion of Portugal.

During these years he became a close supporter of the movement for the abolition of slavery, a cause to which he was to be passionately devoted to for the rest of his life.

Despite being a well-known and popular figure, Brougham had to wait before being offered a parliamentary seat to contest. However, in 1810 he was elected for Camelford, a rotten borough controlled by the Duke of Bedford. He quickly gained a reputation in the House of Commons, where he was one of the most frequent speakers, and was regarded by some as a potential future leader of the Whig Party.

However, Brougham’s career was to take a downturn in 1812, when, standing as one of two Whig candidates for Liverpool, he was heavily defeated. He was to remain out of Parliament until 1816, when he was returned for Winchelsea. He quickly resumed his position as one of the most forceful members of the House of Commons, and worked especially in advocating a programme for the education of the poor and legal reform.

Earlier that year George IV had succeeded to the throne on the death of his long incapacitated father George III. Caroline of Brunswick was brought back to Britain in June for appearances only, but the king immediately began divorce proceedings against her. The Pains and Penalties Bill, aimed at dissolving the marriage and stripping Caroline of Brunswick of her Royal title on the grounds of adultery, was brought before the House of Lords by the Tory government.

However, Brougham led a legal team (which also included Thomas Denman) that eloquently defended the Princess. The bill passed, but by the narrow margin of only nine votes. Lord Liverpool, aware of the unpopularity over the bill and afraid that it might be overturned in the House of Commons then withdrew the bill. The British public had mainly been on Caroline of Brunswick’s side, and the outcome of the trial made Brougham one of the most famous men in the country.

His legal practice on the Northern Circuit rose fivefold, although he had to wait until 1827 before being made a King’s Counsel.

In 1826, Brougham, along with Arthur Wellesley 1st Duke of Wellington, was one of the clients and lovers named in the notorious Memoirs of Harriette Wilson. Before publication, Wilson and publisher John Joseph Stockdale wrote to all those named in the book offering them the opportunity to be excluded from the work in exchange for a cash payment. Brougham paid and secured his anonymity.

Brougham remained Member of Parliament for Winchelsea until February 1830 when he was returned for Knaresborough. However, he only represented Knaresborough until August the same year, when he became one of four representatives for Yorkshire. In November the Tory government led by the Arthur Wellesley 1st Duke of Wellington fell, and the Whigs came to power under Charles Grey 2nd Earl Grey.

It was considered impossible to leave the popular Brougham out of the government, although his independent political standing was thought to be a possible impediment to the new administration. Charles Grey 2nd Earl Grey initially offered him the post of Attorney General, which Brougham refused. He was then offered the Lord Chancellorship, which he accepted, and on 22 November he was raised to the peerage as Baron Brougham, of Brougham in the County of Westmorland. He was to remain in this post for exactly four years.

The highlights of Brougham’s tenure was the passing of the 1832 Reform Act, of which he was a staunch supporter, and the Slavery Abolition Act of 1833, the cause to which he had been devoted to for so many years. However, he increasingly came into conflict with the rest of the government, mostly caused by his tendency to interfere with every department of state.

In 1834 the Lord Chancellor, Lord Brougham and Vaux, was asked “Do you consider that a compulsory education would be justified, either on principles of public utility or expediency?” to which he replied “I am decidedly of opinion that it is justifiable on neither; but, above all, I should regard anything of the kind as utterly destructive of the end it has in view. Suppose the people of England were taught to bear it, and to be forced to educate their children by means of penalties, education would be made absolutely hateful in their eyes, and would speedily cease to be endured. They who have argued in favour of such a scheme from the example of a military government like that of Prussia have betrayed, in my opinion, great ignorance of the nature of Englishmen.” (Report of the Parliamentary Committee on the State of Education. 1834)

He nonetheless kept his post when the government was reconstructed in July 1834 under Lord Melbourne. The Melbourne administration was dismissed by the King in November the same year, and the Tories came to power under Robert Peel. This government only lasted until April 1835, when Lord Melbourne was again summoned to form a government.

However, Brougham was now so ill regarded within his own party that he was not offered to resume the post of Lord Chancellor, which instead was put into commission. An even greater blow to him was when the post was eventually conferred on Charles Pepys 1st Baron Cottenham, in January 1836.

Brougham was never to hold office again. However, for more than thirty years after his fall he continued to take an active part in the judicial business of the House of Lords, and in its debates.

He also devoted much of his time to writing. He had continued to contribute to the Edinburgh Review, and the best of his writings were published in the magazine entitled Sketches of the Statesmen of the time of George III.

In 1837 Brougham presented a bill for public education, arguing that “it cannot be doubted that some legislative effort must at length be made to remove from this country the opprobrium of having done less for the education of the people than any of the more civilized nations on earth”.

In 1838, after news came up of British colonies where emancipation of the slaves was obstructed or where the ex-slaves were being badly treated and discriminated against, Lord Brougham stated in the House of Lords:

"The slave ... is as fit for his freedom as any English peasant, ay, or any Lord whom I now address. I demand his rights; I demand his liberty without stint... . I demand that your brother be no longer trampled upon as your slave!"

Brougham also edited William Paley’s Natural Theology and published a work on political philosophy and in 1838 he published an edition of his speeches in four volumes. The last of his works was his posthumous Autobiography.

In 1860 Brougham was given a second peerage as Baron Brougham and Vaux, of Brougham in the County of Westmorland and of High Head Castle in the County of Cumberland, with remainder to his youngest brother William Brougham (died 1886). The patent stated that the second peerage was in honour of the great services he had rendered, especially in promoting the abolition of slavery.

In 1834, he was elected a foreign member of the Royal Swedish Academy of Sciences.

Brougham had married Mary Spalding (d. 1865), daughter of Thomas Eden, in 1821. They had two daughters, both of whom predeceased their parents, the latter one dying in 1839.

Lord Brougham and Vaux died in May 1868 in Cannes, France, aged 89, and was buried in the Cimetière du Grand Jas. The cemetery is up to the present dominated by Brougham’s statue, and he is honoured for his major role in building the city of Cannes. His hatchment is in Ninekirks, which was then the parish church of Brougham.

The Barony of 1830 became extinct on his death, while he was succeeded in the Barony of 1860 according to the special remainder by his younger brother William Brougham.