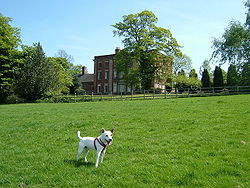 Sir Edward Cromwell Disbrowe 1790 – 1851, Member of Parliament for Windsor, later served in the British diplomatic corps in positions in Switzerland, Russia, Sweden and other postings,  British Ambassador to the Netherlands, Deputy Lieutenant of the county of Derbyshire,

Disbrowe was the lineal descendant of John Desborough (or Disbrowe), a senior commander in the Parliamentary Army who was brother in law to Oliver Cromwell.

Disbowe died at the Hague, and his body was returned to England on the ship HMS Lightning.