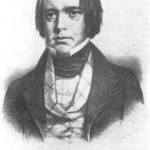 William Gregory (1803-1858) was a Scottish physician who is probably best known today for his work in chemistry (he studied under and translated some of the works of *Justus von Liebig, the noted German chemist). Gregory also had interests in mesmerism and phrenology, Gregory gave weekly lectures on mesmerism and animal magnetism, and he was also interested in phrenology.

From http://www.chem.ed.ac.uk/about-us/history-school/professors/william-gregory William Gregory was born on 25 December 1803 in Edinburgh. He was the fourth son of James Gregory, Professor of Physic in Edinburgh, formulator of “Gregory’s Powder” a mixture of rhubarb rhizome, ginger, and magnesium carbonate, which was for over a century and a half one of the most prescribed medicines in the Pharmacopoeia.

William was the sixteenth of a remarkable academic dynasty, descended from John Gregorie, Minister of Drumoak, Aberdeenshire, to occupy a professorial chair. He entered the University of Edinburgh in 1821 and by 1826 had attended all the compulsory courses of the medical curriculum after which his name does not appear in the Matriculation Register but he graduated M.D. in 1828, his graduation thesis being entitled “De Principiis Vegetabilium Alkalinis”.

The two year gap may be due to his suffering in 1826 an attack of fever which resulted in any unusual exertion causing severe pain and swelling in one of his legs and he was, especially in later years, condemned to an almost sedentary life…

He had no intention of practicing as a physician because he had decided on his career after attending the chemistry lectures of Thomas Charles Hope, Professor of Chemistry at Edinburgh from 1795-1843. Thomas Charles Hope illustrated his lectures extensively by large scale demonstrations that so impressed Gregory that he repeated several of them using crude apparatus which he had made.

From that time he is said to have kept steadily before him the ambition to occupy the Edinburgh Chair of Chemistry.

After graduation he went to study chemistry at Giessen in Germany under the great chemist, Justus von Liebig; the laboratory at Giessen was almost the first in Germany where practical instruction in chemistry was systematically given and in the second quarter of the nineteenth century was famous throughout the world attracting many students who subsequently made important contributions to chemistry.

Gregory returned to Britain in 1828 and for a year was assistant to Professor Edward Turner at the then University of London (now University College, London).  In 1829 he returned to Scotland and for the next seven years was an extra academical lecturer on chemistry in Edinburgh…

In 1836-7 he lectured at the Park Street School of Medicine in Dublin. In 1837 he succeeded Thomas Graham at the Andersonian College in Glasgow and in 1839 he was appointed Professor of Medicine at King’s College, Aberdeen.

When he was appointed, chemistry was being taught by Patrick Forbes, a classicist who taught both Latin and Chemistry, and Gregory therefore, chose to lecture during the winter session, 1839-40, on materia medica, and to conduct a course in practical chemistry in the summer of 1840.

In 1839 King’s College which had previously taught medicine jointly with Marischal College decided to found an independent medical school and Gregory played an important part in its organisation. In October 1840 the Senatus transferred the teaching of chemistry to the Professor of Medicine who was “appointed to teach the class of Chemistry for five days in the week and throughout six months during the ensuing session” .

At Aberdeen chemistry was a compulsory subject for the degree of M.A. and during the period 1840-44 the average attendance at Gregory’s chemistry class was about 44 Arts students and 10 medical students.

In 1843 shortly before the start of the session Thomas Charles Hope resigned his Chair at Edinburgh;  as a stop gap measure Thomas Traill, Professor of Medical Jurisprudence, gave the chemistry course in the 1843-4 session during which the candidates for the Chair, of whom Gregory was one, began to gather…

As a lecturer Gregory was simple, clear, precise, and had a talent for collecting and condensing what was of real scientific importance; his memory was so good that he lectured without notes.

Rather more than half his course was devoted to organic chemistry then rapidly developing through the influence in the second quarter of the nineteenth century of Justus von Liebig at Giessen, Wohler at Gottingen, and Bunsen at Marburg.

Gregory kept himself completely up to date, which was possible by his familiarity with German and French, and this coupled with his judicious assessment of what was really important made him valuable as an author.

His class textbook was his “Outlines of Chemistry” published in 1845…

Gregory’s first research was his greatest contribution to posterity. At that period the medical profession was strenuously tackling the problem of pain, the mainstay of analgesics being opium taken as laudanum. With the advance of organic chemistry chemists had begun to isolate the active principles of drugs and by 1816 morphine was available as the acetate and came into use in medicine about 1823 but it was very expensive and always contaminated with narcotine.

Gregory worked on the problem and in 1831 published a process for isolating morphine hydrochloride in a high state of purity and at a cost no greater than that of an equivalent dose of laudanum. An Edinburgh pharmaceutical firm, John Macfarlan and his partner Rennie Brown, had an established trade in laudanum and was thus in a strategic position to follow up Gregory’s paper as soon as it was published.

Work on the manufacture of morphine hydrochloride began in 1832 and the salt was commercially available in 18337 and was included in the Edinburgh Pharmacopoeia of 1839.

Another Edinburgh firm T &  H Smith commenced the manufacture of opium alkaloids in 1837. At the time morphine was administered orally and because of the similar costs it showed little advantage over laudanum.

The fundamental importance of Gregory’s work did not become clear until 1855 when Alexander Wood introduced hypodermic injection into general practice, and the future of pure morphine salts, which were essential to the technique, was secured. A great demand for opium alkaloids grew up and the production of them by the two Edinburgh companies reached very high levels in the second half of the nineteenth century and alkaloid manufacture is still the principal activity of Macfarlan Smith Ltd., formed by the combination of the two original companies.

Other significant work by Gregory included a purification of chloroform, the discovery of nitrogen sulphide, work on meconic acid, methyl mercaptan and the derivatives of uric acid, the preparation of potassium permanganate, and the distillation of rubber, in which he must have discovered isoprene.

He also contributed to practical science improved processes for the preparation of hydrochloric acid and silver oxide. He was certainly respected by his contemporaries…

In later life due to the trouble with his legs he could do no research which involved standing. Consequently he turned to microscopy and studied the Diatoms, on which he wrote a number of careful papers.

As a man, Gregory was sincere, unselfish and generous. He was remarkable for his coolness and self possession. On one occasion, while he was lecturing, a tube of chlorine dioxide burst in his hand and although a fragment of glass entered his eye he finished his lecture.

He devoted much time to studying languages and to music.  He was a man of wide intellectual interests and was one of the founders of the Aberdeen Philosophical Society and its first secretary. He was elected a Fellow of the Royal Society of Edinburgh in 1832 and acted as one of the two secretaries to the ordinary meetings from 1844 till his death.

In 1830 Gregory married Lisette Scott and they had one son named James Liebig Gregory.

Gregory was deeply interested in phrenology, hypnotism, spiritualism, and occult phenomena generally and contributed papers to the “Phrenological Journal” and wrote a book on hypnotism, “letters to a Candid Enquirer on Animal Magnetism”.

In this book Gregory drew conclusions not supported by experiment and he developed a theory concerning the “higher phenomena” which his critics described as dabbling in the occult. These activities met with his colleagues’ disapproval…

Of his domestic life in a letter to George Combe of 6 July 1840 Gregory writes: “You will be glad to hear that my choice of a wife, which was not made without Phrenology, has been a very fortunate one …We have a very fine little boy, whom we both intend to have a fair chance, as far as we can secure it, of having his faculties properly, that is, phrenologically, cultivated I can say with truth that I enjoy the most perfect domestic happiness, and am more and more satisfied that when people are unhappy in the married state, the cause lies in an unphrenological choice …”

Gregory died on 24 April 1858 at the age of 54 after a long and painful illness… He was honoured with a remarkable display of civic affection in the shape of a public funeral and was buried in the family vault in the Canongate Churchyard.

William Gregory wrote Animal magnetism: or, Mesmerism and its phenomena, and he translated Researches on Magnetism and their relation to the Vital Force by Karl von Reichenbach, and of course, he wrote extensively on chemistry.

*Justus von Liebig was a ’supposed opponent’ of homeopathy. However, he eventually grasped the infinitesimal dose and began to prepare substances as recommended by Samuel Hahnemann, and who despite professing to be an opponent of homeopathy, acknowledged the existence of the Vital Force and experimented with potentisation, and proved the power of high dilutions.