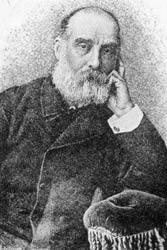 Aurelio Saffi 1819 - 1890 was an Italian politician, active during the period of Italian unification.

Saffi was an Italian Professor at Oxford, who lived in *Naples where he most likely discovered homeopathy,

Saffi was a patient of John Rutherford Russell, a friend of Giuseppe Garibaldi, Giuseppe Mazzini and Thomas Carlyle (who recommended him to John Chapman, the Sterlings and to the Wedgwood family),

From http://carlyleletters.dukejournals.org/cgi/content/full/31/1/ed-31-biographical-notes? Saffi, Aurelio (1819–90), count, poet, and politician; had been one of the triumvirate with the Giuseppe Mazzini governing the short lived Roman republic; in exile in Switzerland, 1850, and London, from 1851. He was with Giuseppe Mazzini in the Milan uprising of Feb. 1853. From Nov. 1853, he lived in Oxford, where he lectured in Italian language and literature at the Taylor Inst.

From http://en.wikipedia.org/wiki/Aurelio_Saffi Aurelio Saffi was an important figure in the radical republican current within the Risorgimento movement and close to its leader and chief inspiration, Giuseppe Mazzini.Saffi was born in Forlì, then part of the Papal States (now Emilia Romagna region). He received an education in jurisprudence in Ferrara, but began political activity in his native city, protesting against the bad administration of the Papal legates. He was also a member of the communal and provincial councils between 1844 and 1845.

He soon became a fervent supporter of Giuseppe Mazzini’s ideas, and in 1849 took part in the short-lived Roman Republic. Saffi was a member of the government that attempted to establish a democratic republic, inspired by the United States. The revolutionaries, however, were soon (June 1849) crushed by French troops, and Saffi retired to Liguria as an exile. From there he joined Giuseppe Mazzini in Switzerland, and then moved with him to London.

Saffi returned to Italy only in 1853, to plan a series of risings to be held in Milan. After the failure of the project, he was condemned to twenty years in prison. While in jail he married (1857) Giorgina Janet Craufurd. She was also a fervent supporter of Giuseppe Mazzini, and a feminist. They had four sons.

After his release in 1860, Saffi moved to Naples, again with Giuseppe Mazzini. The following year he was elected a deputy in the Parliament of the newly formed Kingdom of Italy. Some years later he returned to London, where he remained until 1867.

He spent his last days in his villa in the Forlì countryside, moving to Bologna where he had received a professorial chair. He also devoted himself to collecting historiana connected to his friend Giuseppe Mazzini.

He died at the age of seventy at his residence, Villa Saffi, which is now turned into a museum. There is a statue of Saffi in the central square of his native Forlì.

*Naples was the centre of the clinical trials conducted into homeopathy by Cosmo Maria De Horatiis and Francesco Romani,