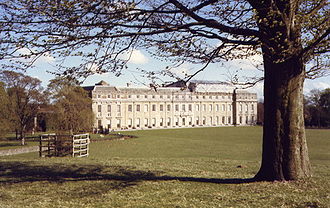 George Wyndham was a Vice President of the London Homeopathic Hospital, and a Sponsor of the homeopathic hospital in Smyrna,

A direct descendant of John Wyndham, he was the eldest natural son of George O’Brien Wyndham 3rd Earl of Egremont, and Elizabeth Ilive.

He entered the British Army and achieved the rank of Colonel. His parents were married in 1801 but had no sons after their marriage.

The earldom of Egremont became extinct on the death of Lord Egremont’s nephew in 1845 and Leconfield was adopted as the heir to the substantial Egremont estates, including Petworth House in Sussex.

In 1859 he was raised to the peerage as Baron Leconfield, of Leconfield in the East Riding of the County of York.

Lord Leconfield married Mary Fanny Blunt, daughter of Reverend William Blunt, in 1815. He died in March 1869, aged 81, and was succeeded in the barony by his eldest son Henry. His second son Percy Scawen Wyndham was the father of the politician and man of letters George Wyndham.

George O’Brien Wyndham 3rd Earl of Egremont 1751 – 1837, father of George Wyndham 1st Baron Leconfield, was a member of the Prince Regent’s set in Brighton and an advocate of acupuncture, was a British peer.

There is some evidence that Valentine Richard Quin, 1st Earl of Dunraven fathered an illegitimate son by the Duchess of Devonshire, who became the noted homeopath Frederick Hervey Foster Quin.

Valentine Richard Quin, 1st Earl of Dunraven and Mount-Earl, 1st Baronet 1752 – 1824 was an Irish Peer. Thady Quin was succeeded by Valentine Quin of Adare, who in 1707 had married Mary, daughter and co- heir of Henry Widenham of The Court, Adare.

Valentine died in 1754 and was succeeded by his son Valentine Richard Quin, MP for Killmallock 1799 – 1800, who was created a Baronet of Great Britain in 1781 and was raised to the peerage in 1800 as Baron Adare of Adare.

He was advanced to a Viscountcy in 1816 as Viscount Mount Earl and became Viscount Adare and the first Earl of Dunraven and Mountearl on 5 February, 1822. He had presumably chosen the title of ‘Dunraven’ in honour of his daughter in law, Caroline Wyndham, who had married his eldest son in 1810.

His earldom lasted only two years and in 1824 his son, Wyndham Henry Quin, became the 2nd Earl of Dunraven and Mountearl. The family name had officially become Wyndham Quin in 1815… is there a family connection here?