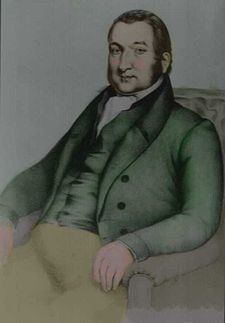 Sir William Charles Ellis 1780 - 1839 was an influential figure in the early treatment of mental health, and he was the first superintendent of Hanwell Lunatic Asylum where he invited homeopaths in to treat the patients. (note Charles Augustus Tulk 1786 - 1849, a close colleague of  James John Garth Wilkinson, was Chairman of the Hanwell Asylum in the 1840s ref: The Swedenborg Society: a very short history by Richard Lines Company Secretary and past President of the Swedenborg Society.)

Homeopaths from America visited Hanwell Asylum, as the innovations of William Charles Ellis had already inspired other progressive facilities in America.

’Sir William Ellis presents his compliments to Dr. Quin, and regrets he had not the opportunity of calling upon him yesterday, as he fully intended.

‘Sir Wm has lately heard of the system of homeopathy, which he understands Dr. Quin is acquainted with, and conceiving that it may be useful amongst the patients of this Institution, Sir Wm is desirous of hearing something more of it.

‘Dr. Dunsford and Dr. Curie have been so obliging as to accept an invitation to a family dinner, and it would be a great additional pleasure if Dr. Quin would accompany them. Dr. Dunsford will be so kind as to arrange the time if next Friday is inconvenient. Sir William Ellis, County Lunatic Asylum Hanwell 1836.’

William Charles Ellis’ early career was as an apothecary but he soon took an interest in the treatment of mental disorders. This he learnt at the Sculcoates Refuge in Hull; which was run on a similar model as the York Retreat.

In 1817 a William Ellis was appointed as superintendent to the newly built West Riding Pauper Asylum at Wakefield. A Methodist, he too had strong religious convictions and so with his wife as matron he employed the same principles of humane treatment and moral therapy as practised at Sculcoates Refuge.

After 13 years their reputation had become such, that they were then invited to run the newly built first pauper asylum in Middlesex called the Hanwell Asylum. Accepting the posts, the asylum opened in May 1831.

Here the Ellis’s introduced their own flavour of ‘humane treatment’ and moral therapy combined with ‘therapeutic employment’. The approach he used went down well with patients, it was always voluntary, it made them feel valued and appreciated, it enabled them to recover their self esteem.

Also, by having something with real ‘purpose’ to do that helped with the care of others or help with the running of the asylum, not only occupy their time but also took the minds off their troubles and suicides became extremely rare.

By preserving their everyday life skills in this way he made it easier for his patients to pick up their lives again when they were well enough to leave, which now came sooner because these methods speeded recovery.

Ellis became famous in his own lifetime for his pioneering work and his adherence to this ‘Great Principle of Therapeutic Employment’ and was rewarded with a knighthood.

It may be helpful to point out here that those records that appear to show poorer recovery rates than achieved today, are total patient counts. As the new asylum system grew so the number of those admitted that were always deemed ‘incurable’ and were quite different from the ‘lunatic insane’ which is what these institutions for were originally built for.

The greater part of these new classes of patients were the elderly, sent by the workhouses as being ill and very close to death. Also, before the introduction of antibiotics there were other incurables such as those with tertiary syphilis and gonorrhea that came in.

Towards the end of the nineteenth century, greater numbers of people suffering from epilepsy were also getting admitted. All this had the effect of considerably slewing some of the modern accounts critical of the effectiveness of these early establishments, even though there survives a great mass of comprehensive and detailed records from this period.

On top of this, when the NHS took on the running of the mental hospitals they stopped admitting those classes of patient that appear in the Victorian records as ‘idiots,’ ‘imbeciles’ and ‘feeble-minded.’ These people were now sent to care homes elsewhere.

Ellis resigned his post at Hanwell in 1838. This came about because the visiting Justices wished to expand the capacity of the asylum again. Also, for such an institution which was wholly funded for by a levy on the local rates, it was becoming of the utmost importance, in the opinion of the visiting justices, that that best use be made of the assets and monies spent, and that there were records and statistics to demonstrate that this was indeed being archived. However, this required an organisational change in the way and in the detail that the asylum was managed and run.

He and Lady Ellis then set up their own private asylum for a few ladies and gentlemen of the upper social classes, quit near by, in the grounds of Southall Park; this being the former residence of Lord Montford.

Alas, Ellis was a very large man and plagued through out his life by ill health. This no doubt lead to his untimely death from dropsy just as short while later on 24 October 1839.

The (1st Middlesex) County Asylum at Hanwell, also known as Hanwell Insane Asylum, was built for the pauper insane and has evolved to become the West London Mental Health (NHS) Trust (WLMHT). The 2nd Middlesex was Colney Hatch Asylum, opened in 1851, and the 3rd was Banstead Asylum in Surrey, opened in 1877.

John Conolly, the third superintendent at Hanwell Lunatic Asylum was liberal in his attitudes towards homeopathy, and under his guidance, the institution became world famous for being the first ‘large’ asylum to totally dispense with all mechanical restraints.