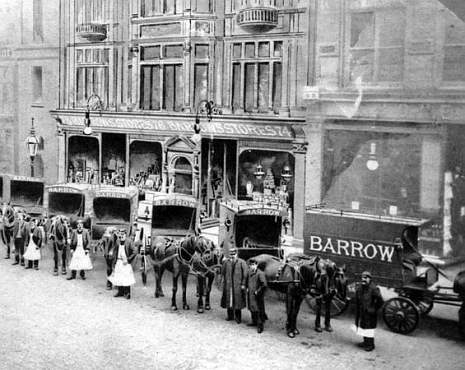 Benjamin Hudson 1796 - 1875 was a British printer, stationer and bookseller, the ’oldest bookshop in Birmingham’ (established 1821 - he spent 54 years in one shop), operating as B Hudson and Son from 18 Bull Street in Birmingham, member of the Committee at the Spring Hill College in Birmingham, was on the Management Committee of the Birmingham Homeopathic Hospital,

B Hudson and Son published The Philanthropist - first published as The Reformer), which operated only for four years, and which produced copies for private circulation only, but which became influential enough to voice the mood for social change at that time (Gregory Claeys, Owenite Socialism: Pamphlets and Correspondence V5 1838-1839, (Taylor & Francis Group, 2005)).

Benjamin Hudson at 18 Bull Street, was also a branch of the British Empire Mutual Fire and Life Office,

From Personal Recollections of Birmingham and Birmingham Men by Eliezer Edwards 1815 0 1891:  Bull Street was then the principal street in Birmingham for retail business, and it contained some very excellent shops.

Most of the then existing names have disappeared, but a few remain. Mr. Suffield, to whose courtesy I am indebted for the loan of the rare print from which the frontispiece to this little book is copied, then occupied the premises near the bottom of the street, which he still retains.

Mr. Adkins, the druggist, carried on the business established almost a century ago. He is now the oldest inhabitant of Bull Street, having been born in the house he still occupies before the commencement of the present century.

Mr. Gargory—still hale, vigorous, and hearty, although rapidly approaching his eightieth year—then tenanted the shop next below Mr. Keirle, the fishmonger. His present shop and that of Mr. Harris, the dyer, occupy the site of the then Quakers’ Meeting House, which was a long, barn-like building, standing lengthwise to the street, and not having a window on that side to break the dreary expanse of brickwork.

Mr. Benson was in those days as celebrated for beef and civility as he is now. Mr. Page had just opened the shawl shop still carried on by his widow.

Near the Coach Yard was the shop of Mr. Hudson, the bookseller, whose son still carries on the business established by his father in 1821. In 1837, Mr. Hudson, Sen., was the publisher of a very well conducted liberal paper called The Philanthropist. The paper only existed some four or five years. It deserved a better fate…

The Philanthropist -First published (as The Reformer) April 16, 1835, by Benjamin Hudson, 18, Bull Street; weekly, four pages, price 7d., but in the following September lowered to 4-1/2d., the stamp duty of 4d. being at that time reduced to 1d. In politics it was Liberal, and a staunch supporter of the Dissenters, who only supported it for about two years.

From Showell’s Dictionary of Birmingham: The preceding are really but a few of the men of note whose connection with Birmingham has been of historical interest, and the catalogue might be extended to great length…

A volume might easily be filled with lives of scientific and literary men of the past, Hutton the historian, Morfitt, poet and barrister; Beilby, Hodgetts, Hudson, and other bookmen, to say naught of the many Press writers (who in their day added not a little to the advancement of their fellow townsmen)…

In 1850, Benjamin Hudson lost his son John Hudson 1826 - 1850, and the artist William Warner Major wrote to him to offer his condolences,

William Hudson, son of Benjamin Hudson, was also a printer at 18 Bull Street, (he joined the firm in 1851),