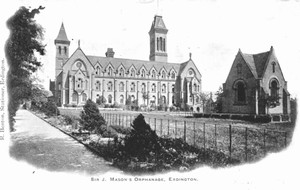 Edward Wynne Thomas was a homeopathic practitioner at the Sir Josiah Mason Orphanage, and he was the homeopath of Josiah Mason, and a colleague of James Gibbs Blake,

These premises proving inadequate to the purpose, in 1869 a second, larger orphanage was opened in Bell Lane (now Orphanage Road), Erdington, with rooms for 26 women and dormitories for 300 children. (The health of the children was placed under the care of two homeopathic practitioners James Gibbs Blake (trustee) and E Wynne Thomas).

Edward Wynne Thomas was born in Owestry and he passed his Apthothecaries examinations in 1858,

Edward Wynne Thomas’ Obituary is in The British Homeopathic Review, Volume 37 in 1893,

Harold Wynne Thomas ?1865 - ?1940 MRCS, LRCP, BA University of Birmingham, IRCP London 1889, MRCS England 1889, FBHS, MDMA, son of E Wynne Thomas, was a British orthodox physician, Obstetrician and Surgeon in Birmingham, who converted to homeopathy, to become the Senior Medical Officer at the Phillips Homeopathic Hospital in Bromley, and the President of the British Homeopathic Society,

Harold Wynne Thomas was present at the Eighth Quinquennial Homeopathic International Congress in 1911, and was also a member of the Committee of the London International Homeopathic Council in 1914, where the decision was made to found a Homeopathic Hospital at Neuilly sur Seine in France, under military control, for medical cases, on the Western front of the Allies, and he was at the Homeopathic Congress in London in 1924 (where he warned that the vast amount of salt added to our food contributed to cancer),

Harold Wynne Thomas was a colleague of George Henry Burford,

At a meeting of the Acting Committee of the International Homeopathic Council held in London late in 1914, its deliberations included a proposition for the establishment of a Homeopathic Hospital, under military control, for medical cases, on the Western front of the Allies.

Their consultation issued in the nomination of a Provisional Committee constituted by representatives of the principal homoeopathic activities in Great Britain, and the publication of a statement of the case, with an appeal for funds to those favourably inclined to the work.

Thus did the leaders of British Homeopathy lead, and the response of the English speaking homeopaths the world over was immediate and maintained. Fortified by this support, the Provisional Committee nominated two Commissioners (Ethelbert Petrie Hoyle and David MacNish) to proceed to France to confer with the military authorities there, as well as with the principal homeopathic physicians in Paris.

As the issue of this investigation, the Committee decided to work under the auspices of the French Red Cross Society, and to internationalism as far as possible, the interest it was desirable to arouse of homeopathic supporters in this special procedure.

The instructions of the Commissioners had included, as requirements, that the Hospital be as near as possible to the fighting line, while retaining easy communication with England as the necessary base for staff and supplies. The Franco Belgian area, and the district served by the Calais Paris railway were especially noted for investigation ad hoc.

After a primary visit and report the Commissioners made a second journey, and concluded that Paris itself offered indubitably the maximum advantages for the location of the proposed Hospital. In this survey the Commissioners had the profit of the counsel and personal co-operation of Dr. Bernard Arnulphy of Paris, whose intimate knowledge of localities and their possibilities was of special and particular value in the enquiry.

The Commissioners further reported, and their report carried Dr. Arnulphy’s concurrence, that the Villa Borghese at Neuilly sur Seine, already furnished as a large Sanatorium, was especially suitable alike in location, size, ease of access and general fitness for the institution proposed by the Committee. Other alternative sites and buildings were also reported on, but inquiry proved that none of these was so suitable.

Beautiful for situation, the Villa Borghese, selected by the Board of Management as the most fitting for the establishment of the Anglo French American Hospital, was an up to date modern building, standing in its own grounds of about 5,000 square metres, in the well-known suburb of Paris, Neuilly sur Seine.

The Villa consisted of the original building, with large entrance hall, ante rooms, and spacious salons on the ground floor, each capable of accommodating eight or ten beds and suites of smaller apartments with bathrooms on the floors above. The Annexe, an erection of more recent date and connected with the main building by a closed in corridor, contained suites of rooms each provided with its own bath room, where hot and cold water was in continuous supply.

In the grounds a wooden pavilion, containing eight small rooms, did good service for purposes of isolation and, in the latter part of the life of the Hospital, when surgical cases were more freely admitted, served as an intermediate location before men were drafted to depot or home for convalescence.

Having been in use for several years as a private Sanatorium the Villa Borghese contained everything necessary for the equipment of a hospital for medical cases. The Villa was lighted throughout with electricity, whilst a very complete heating installation ensured equal warmth to all parts of the Hospital during the severe weather.

After the later decision of the Committee to admit surgical cases the Chambre Hydropathique, also on the ground floor, was converted into the operating theatre. The Medical Record is of special interest as well as of ample range. The location of the hospital service entirely in Paris, ruled out at once cases of injury and illness direct from the trenches.

The type of case allotted by the distributing authorities was thus less of the acute than of the chronic and often derelict type; cases whose restoration to health was of as much value per man to the military forces, but often infinitely more difficult to compass, than that of the acuter casualties of the battlefield, running a shorter clinical course.

Such almost intractable instances of broken stamina and lost recuperative power, which are the trouble and perplexity of many military hospitals, were the staple of the Neuilly medical clinic.

The hospital, declared and recognised as a homeopathic hospital, carried on its daily work on homeopathic lines, and under the best homeopathic auspices, exactly as any similar institution in this country. The therapeutics were throughout of the school of Samuel Hahnemann.

The laboratory findings were made by Paris experts. The nursing sisters were fully trained and of British qualification; the probationer nurses had received their preliminary training in British hospitals; all the nursing staff had bi-lingual qualifications.

The internal distribution of the hospital as rooms of moderate size, mostly en-suite, with smaller rooms in the detached annexe, was immensely superior to the usual barrack-like provision of huge wards, and lent itself easily to the separate treatment of special cases, particularly those of tuberculosis and typhoid. The latter cases were necessarily those of the later stage, when fit for transport, and also some with sequelæ of the acute period.

Tuberculosis was always with us, as a distinctive or complicated malady; and to such an extent as to suggest that tubercle, latent or declared, was to be reckoned with in most of the chest cases. A good many of the patients transferred from other hospitals had their transfer papers marked or sur-marked “Bronchite,” and this, with French physicians, implies suspected tuberculosis…

At first and intentionally the surgery was limited to medical cases having surgical complications. This required naturally a dressing equipment, and later, as surgical necessities increased, a full operative installation was made by the hospital authorities, and a resident House Surgeon added to the staff.

Surgical cases, having regard to the pronouncement of an eminent authority “that a wounded soldier is also a sick soldier,” were now admitted to a section of the hospital beds. The Médecin-chef was at this time alike a homeopathic physician of distinction as well as a hospital trained surgeon.

Ultimately the surgical clinic was conducted by a specially appointed staff surgeon, with the co-operation of his professional colleagues. Alfred Edward Hawkes, during his term as Médecin-chef, obtained from Professor Hartmann (chief of the American Ambulance and a Paris surgeon of world wide renown) the courteous assurance that surgical cases, requiring a highly organised surgical installation, or a special surgical experience, could be transferred, if necessary, to Professor Hartmann’s own surgical clinic.

Of this professional fraternity advantage was taken in certain cases whose particular needs required so wide a range of surgical skill; and special thanks are due alike to Alfred Edward Hawkes who engineered, and to Professor Hartmann, who co-operated in so excellent a working arrangement.

One case was that of a man with badly wounded left arm, thigh and leg where gas-gangrene had developed. He was transferred to Professor Hartmann’s clinic for operation. The case was beyond surgical relief and the patient died.

Other cases of a grave character similarly dealt with were uniformly fortunate in their issue. In the later months of the work at Neuilly the cases were increasingly surgical. Altogether they totaled one hundred and twenty two. Many of these had been operated on at the base hospitals, cases of fracture having received the requisite surgical first aid, and bullets and shrapnel fragments having mostly been extracted.

James Edward Huxley Blake MD, Church Canon, son of James Gibbs Blake, was the first student to register at the Mason Science College, who subsequently graduated BA from the University of Birmingham, and it is likely that Harold Wynne Thomas was also one of the first students at these institutions alongside him.

… an agreement for a licence to make and use a tramway from close to Plas Ucha across part of Plas Isa Farm - presumably in connection with some mining or quarrying operation… (this legal agreement) Bears the signatures of the two licensees [Edward Wynne Thomas of Oswestry and George Smith of The Hollies near Llangollen].