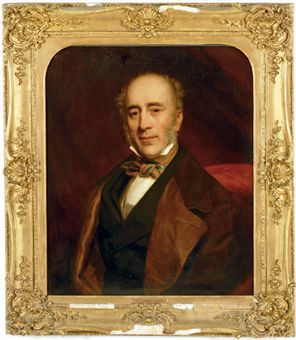 James Clark asked Frederick Hervey Foster Quin for some homeopathic medicine and a list of books, as he wished to conduct clinical trials into homeopathy:

’I wrote to you some six or eight weeks ago by your Italian homeopathic friends, and requested you to send me some homeopathic medicine and a list of books you consider most deserving of looking into.

‘I am desirous, very desirous that you do this as soon as possible, because at this moment I feel disposed to give some of the remedies a trial in my infirmary, and in a sort time I shall be, perhaps, too much occupied with one thing or another to give the matter that close attention which is would require.

‘I confess that, in looking into some of the doctrines on the similia similibus principle, I have been struck with the apparent explanation which it affords to some practical facts that I had treasured up in my mind, and which puzzled me not a little before.

‘I beg you not to lose an occasion of sending me the medicine chest and the information I wish so much, and if an occasion does not soon preset, Balliere will take charge of it, I have no doubt.

‘You must also send me a bottle of sugar of milk if such a thing is to be met with in Paris. I shall be glad to hear that you continue to prosper, and the late occurrences in Paris (alluding to the Revolution) have not diminished your clientelle.

‘The difficulty, insurmountable in private practice, in this country presents itself to the mode which you homeopathists administer your drugs; no man’s reputation could stand it a month. The contraries would soon floor the similias. They are preparing to publish a cyclopaedia of practical medicine in this country.

‘I have nothing to do with it further than writing one or two articles for it; I will send you a prospectus as soon as I can get one. Yours very truly.’ James Clark’s letter to Frederick Hervey Foster Quin 19.10.1830.

’Many thanks for your kind and promt answer. I perceive, although you do not speak out, that you think my resolution an imprudent one. But as you do not advance one difficulty that has not been staring me in the face for some time (in fact since I first began to believe in homeopathy), your letter instead of damping my spirits, rather has had the contrary effect; as for my being considered an apothecary by the profession, that is the least possible evil I can expect; I am prepared to hear myself called and treated as quack, charlatan, visionary, and heaven knows what besides by your liberal confreres in London.

‘Whether either the college or the worshipful body may think me worthy of their notice I know not, but I shall not be taken by surprise if they do persecute me, as I shall go to England prepared for all these ills, the absence of any one of these will be an agreeable surprise to me…

‘Like every man who has the courage to introduce useful innovations I must make up my mind to struggle with great difficulties, and it is the conviction that I shall have the same difficulties to encounter ten or twenty years hence as much as today, that has in a great measure induced me to listen to the suggestions of my friends to establish myself sooner in London than it was originally my intention…

‘You say, my dear Clark, that you do not place the same confidence in homeopathy that I do. It would, indeed, be wonderful if you did. You have not yet tried it. There is no man to whom I would more willingly apply than to you were I in difficulty about the treatment of a patient according to the present practice, but till you have fairly tried the new system, and not till then can I admit your opinion on it as a valid one; and permit me to observe, in order to give it a fair trial, you must do it a la lettre of the instructions of those who have put it to the test before you, and not with modifications founded upon a priori reasoning.

‘However, I will willingly compound in any way to induce you to try it even as circumstances will allow. I can well imagine all the menagement you will be obliged to take in your infirmary, I hope you will not lose heart, but give it a fair trial. God bless you my dear Clark. Frederick Hervey Foster Quin’s letter to James Clark October 1830.

Unfortunately, James Clark did not go ahead with his clinical trials into homeopathy, such was the threat from his ‘liberal’ colleagues.

With his friend James Clark, who also came of farming stock, John Forbes walked to the local parish school at Fordyce.  They became close friends and their later medical careers coincided as physicians in London.

Both were helped financially at Fordyce school by scholarships, which were originally funded from a legacy donated by an ancestor of John Forbes’ mother, Cicilia Wilkie.  This provided a small annual income for twenty children for five years’ education at the school, and for an additional four years of higher education at the University of Aberdeen…

Between 1817 and 1822 John Forbes laid the foundations for his knowledge of the newly invented stethoscope of Rene Laennec, an early model of which James Clark had brought back from Paris in 1818.

James Clark was enthusiastic about the French physician’s teaching on stethoscopy as expressed in his classical work De L’Auscultation Médiate (1819), and, prompted by James Clark, John Forbes translated this into English in four editions issued between 1821 and 1834. (James Clark’s recommendation was followed by John Forbes being appointed as Physician to Prince Albert).

James Clark was an English physician, was born at Cullen, Banffshire, and was educated at the grammar school of Fordyce and at the universities of Aberdeen and Edinburgh.

He served for six years as a surgeon in the army; then spent some time in travelling on the continent, in order to investigate the mineral waters and the climate of various health resorts; and for seven years he lived in Rome.

In 1826 he began to practise in London. In 1835 he was appointed physician to the Duchess of Kent, becoming physician in ordinary to Queen Victoria in

He published The Influence of Climate in Chronic Diseases,_ containing valuable meteorological tables_ (1829), and a Treatise on Pulmonary Consumption (1835).

In 1826 he was admitted a licentiate of the Royal College of Physicians and served on the General Medical Council between the years 1858 and 1860.

He was responsible for a number of Royal commissions including advising on military hygeine in the aftermath of the Crimean War, and introduced Florence Nightingale to Queen Victoria.