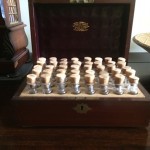 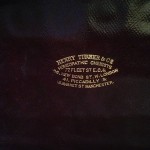 , so beautifully photographed by David Mundy on his visit to Greenway House and sent to me via email on 6.6.14! Thanks David!

Henry Turner & Co had offices in London and Manchester, and they published The British Journal of Homeopathy, The Monthly Homeopathic Review, The Homeopathic Medical Directory of Great Britain and Ireland, with John James Drysdale and George Atkin, The North American Journal of Homeopathy (British edition), and many other homeopathic books and writings from both sides of the Atlantic and from Europe.

Henry Turner was a colleague of Julius V Schweitzer,

Henry Turner was also a homeopathic practitioner, trialing the use of salts in the treatment of cholera in Jamaica in 1854, and he wrote to The Times to advertise his success.

Henry Turner was the Chemist of the Bournemouth Homeopathic Dispensary,

The Lung Disease of Cattle; or pleuro pneumonia cured by homeopathy, Henry Turner 1856 discussed some work done by William Haycock, who first noticed this disease in 1842, George Edward Allshorn, Charles W Luther and John Rush, who also had experience treating this disease.

Farmers had been losing thousands of cattle to this disease, Charles W Luther estimated that 6 out of every 10 cattle so affected could be cured. Peter Stuart also was using homeopathy at this time and treated up to 180 cows with this disease, saving about 130 of them. George Edward Allshorn used aconite and bryonia and estimated he had saved 17 out of every 20 cows he treated.