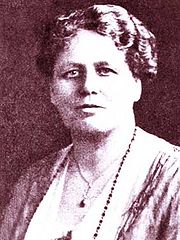 Katherine Maria Routledge 1866 - 1935 was a British archaeologist who initiated (but did not complete) the first true survey of Easter Island.

Katherine Routledge an advocate of homeopathy, as was her first cousin Joseph Albert Jack Pease 1st Baron Gainford, and her other relatives in the Gurney family,

Katherine was the second child of Kate and Gurney Pease, and was born into a wealthy Quaker family in Darlington, northern England. She graduated from Somerville Hall (now Somerville College, Oxford), with Honours in Modern History in 1895, and for a while taught courses through the Extension Division and at Darlington Training College.

After the Second Boer War, she traveled to South Africa with a committee to investigate the resettlement of single working women from England to South Africa. In 1906 she married William Scoresby Routledge. The couple went to live among the Kikuyu people of what was then British East Africa, and in 1910 jointly published a book of their research entitled With A Prehistoric People.

In 1910 the Routledges decided to organize their own expedition to Easter Island/Rapa Nui. They had a state of the art 90 foot (27 m) long Schooner built and named it Mana. They affiliated with the British Association for the Advancement of Science, the British Museum and the Royal Geographical Society, recruited a crew and borrowed an officer from the Royal Navy. The Mana departed Falmouth on 25 March 1913.

They arrived on Easter Island on 29 March 1914. They established two base camps, one in the area of Mataveri and the other at the statue quarry, Rano Raraku and also explored Orongo and Anakena. With the help of a talented islander known as Juan Tepano, Routledge proceeded to interview the natives and catalogue the Moai (giant statues) and the Ahus they had once stood on.

They excavated over 30 Moai, visited the tribal elders in their leper colony north of Hanga Roa and recorded various legends and oral histories including that of Hotu Matua, the Birdman cult, clan names and territories and also some data on the enigmatic “rongorongo” script; van Tilburg credits her with a primary role in assisting preservation of Rapa Nui’s indigenous Polynesian culture.

One of her discoveries was the cultural continuity between the statue carvers and the Polynesian Rapa Nui resident on the island in her time; the designs carved on the back of the statues she excavated included the same designs tattooed on the backs and posteriors of elderly islanders in the leper colony. As the tattooing tradition had been suppressed by missionaries in the 1860s this particular primary evidence was unavailable to later expeditions except through her records.

During their stay, the German East Asia Squadron, including the armored cruisers Scharnhorst and Gneisenau, and the light cruisers Dresden, Leipzig, Emden and rendezvoused off Hanga Roa. While the expedition covered up their main discoveries to hide them from the Germans, the Germans converted their fleet to a fighting trim.

By the time the Germans landed 48 British and French merchant seamen from sunken prizes it had become clear to all that World War I had broken out, and Routledge complained sharply of this infringement of neutral Chilean territory to the schoolmaster in his capacity as representative of the Government of Chile; whilst her husband sailed the Mana to Valparaiso to pass on a similar complaint to the British Consul in Santiago.

There is no record of what steps the schoolmaster took to persuade the German fleet to leave Chilean waters, but they did depart, most of them to Coronel and the Falklands. Some of the stranded French merchant seamen were recruited as labourers by the expedition.

Routledge also decided to mediate in the native rebellion against the sheep ranch that was led by local medicine woman and visionary, Angata.

The Routledges departed the island in August, 1915 returning home via Pitcairn and San Francisco. She published her findings in a popular travel book, The Mystery of Easter Island, in 1919. Hundreds of the objects that she and her husband found are now in the Pitt Rivers Museum, whilst her paper records are held by the Royal Geographical Society in London. Most of her scientific conclusions are accepted to this day.

From early childhood, Routledge had suffered from what is today believed to have been the developing stages of paranoid schizophrenia. She had auditory hallucinations and “heard voices.”

After 1925, her schizophrenia got worse and displayed itself in the form of delusional paranoia. She threw William Scoresby Routledge out of her Hyde Park, London mansion and locked herself inside. She also hid many of her field notes. Her family blamed Angata, accusing her of being a “witch doctor”.

In 1929 William Scoresby Routledge and her family had her kidnapped against her will and confined to a mental institution.

She died institutionalized in 1935. Her husband gave the field notes he found to the Royal Geographical Society. One of his executors found photographs of the Easter Island expedition ten years after his death. Maps of the expedition were found in William Scoresby Routledge’s house in Cyprus in 1961.

Family papers and photographs, previously unpublished, including details of her illness, were made public through her recent biography. Archaeology on Easter Island continues to make use of her field notes and ethnographic research.

Katherine Maria Routledge was a relative of Edmund Gurney,

The Pease Family was influential and well connected, married into Fox family of Falmouth and into the Wedgwood family, Katherine’s relatives also included Edward Reynolds Pease (1857-1955), a founder and long time secretary of the Fabian Society, :

The Pease family was a prominent mostly Quaker family associated with DarlingtonCounty Durham and descended from Joseph Pease of Darlington, son of Edward Pease (1711–1785).

The family earlier came from Fishlake, Yorkshire. They were heavily involved in the 19th century in woollen manufacturing, railways, coal mines, and politics. Notable events in their history include the establishment of the Stockton and Darlington Railway in the 1820s and the failure of the family bank in 1902. The latter forced several of them close to bankruptcy. Six members of the family were Members of Parliament.

George Routledge 1812  -1888, no relation to Katherine Routledge, was a British publisher,