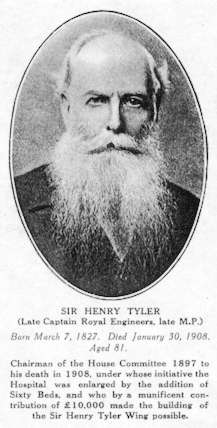 Henry Whatley Tyler 1827 - 1908 was a British Inspector of Railways, Railway Company director and Conservative politician who sat in the House of Commons from 1880 to 1892.

Henry Whatley Tyler was interested in homeopathy and contributed large sums of money for the expansion of the London Homeopathic Hospital.

Tyler was the son in law of Charles William Pasley  (1780–1861), who was member of the management board of  the Hahnemann Hospital at 39 Bloomsbury Square (Anon, Homeopathic Record, Volumes 1-2, (Arthur Crowden Clifton, James Epps, Henry Turner, 1851). Page 277). Charles William Pasley’s wife was a patron of homeopathy (Alfred Crosby Pope, The Monthly Homeopathic Review, (1883). Page 252).

Tyler’s daughter Margaret Lucy Tyler was a student of James Tyler Kent and became one of the most influential homeopaths of all time.

”When her father, the late Sir Henry Whatley Tyler, gave the Tyler Wing to the London Homeopathic Hospital, he told her “I have done my part: now you must do yours.” [Margaret Lucy Tyler: An Appreciation John Weir, in Homeopathy 1943]

Margaret Lucy Tyler’s mother later consolidated this link as the ‘Sir Henry Tyler Scholarship’, a Trust Fund to send young doctors over to the USA for further training in homeopathy.

http://en.wikipedia.org/wiki/Henry_Whatley_Tyler  Tyler was born in Mayfair, London the son of John Chatfield Tyler and attended the Royal Military Academy Woolwich. He joined the Royal Engineers and in 1851 was a lieutenant called upon by Henry Cole to assist with the organisation of the Great Exhibition. In 1860 he donated a set of prospectuses to the State Library of Victoria.

Tyler was appointed an Inspecting Officer for Railways in 1853 a function which is normally carried out by Royal Engineers officers, holding the position for 24 years.A typical investigation is reported in the press in 1858.

Other important investigations included the Wooton bridge collapse and the Clayton Tunnel rail crash, both of which occurred in 1861. The former involved failure of cast iron beams supporting the track in a wooden bridge, through which a coal train fell, killing the driver and stoker instantly. The Clayton tunnel crash involved a collision in the tunnel and was the worst rail disaster at the time, killing 24 passengers in the rear coaches. He also reported on the Bull bridge accident when yet another cast iron girder failed suddenly as a train was passing over.

His expertise was called upon not only in the UK but also in various locations in Europe. In 1866 he was sent to inspect the railway systems of France and Italy, in order to determine how best to transfer mail destined for India from northern France to the Italian port of Brindisi. On his recommendation the route was accepted.

In 1867 he investigated London’s water supply following an outbreak of cholera, an investigation which involved emptying a reservoir of the East London Waterworks Company next to the river Lea, and tasting the contaminated water. His report helped confirm that cholera was water borne rather than by the air.

In 1868 he spent two periods of leave building the first railway in Greece from Athens to Piraeus. In 1871 he received promotion to Chief Inspector of Railways, and in 1874 he went to America to inspect the Erie for British investors.

He was also chairman of the Westinghouse Air Brake Company and Deputy Chairman of the Great Eastern Railway Company. In 1880, Tyler was elected Conservative MP for Harwich .

In 1882 he objected to a Theosophist article, against which he raised a charge of blasphemy and became embroiled in a conflict with Annie Wood Besant.

In 1893 he gave up the presidency of the Grand Trunk Railway Company. Tyler married Margaret Pasley, daughter of General Sir Charles Pasley, K.C.B. in 1852.