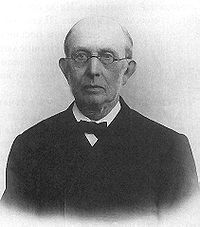 Pobedonostsev was appointed Ober Procurator of the Holy Synod, the highest position of the supervision of the Russian Orthodox Church by the state.

In this position, Pobedonostsev attached a homeopathic brochure to the church periodical, as the church authorities found homeopathy very beneficial for the church’s prestige, because an increasing number of priests were practicing homeopathy in the villages.

The brochure Pobedonostev used was the one issued by the St. Petersburg Society of Homeopaths entitled Some Brief Information About Homeopathy, and Pobedonostev attached this to The Church Gazette, Tserkovnye Vedomosti,

Pobedonostsev’s father Pyotr Vasilyevich Pobedonostsev was a Professor of literature at Moscow State University. In 1841 he placed his son, aged then 14, in the School of Jurisprudence in St. Petersburg which had been established precisely in order to prepare young men for civil service.

After graduation Konstantin Pobedonostsev entered public service as an official in the eighth Moscow department of the Senate. The task of the department was to resolve civil cases from guberniyas surrounding Moscow. He was promoted rapidly within the eighth department.

At the same time in 1859 Moscow State University requested him, then aged 32, to hold lectures in civil law instead of V N Nikolski, who had moved abroad. For the next six years Pobedonostsev was lecturing eight hours every week while continuing to work in the eighth Moscow department.

In 1865 he was elected Emeritus Professor, 38, at the university. But on April 12, 1865 his pupil Nicholas died, but Pobedonostsev was invited to teach the former’s brother Alexander (Tsar Alexander III).

In 1868, he became a senator in St. Petersburg, in 1874 - a member of the Council of the Empire, and in 1880 - chief procurator of the Holy Synod. In the latter office Pobedonostsev was de facto head of the Russian Orthodox Church, just the year before Tsar Alexander II was assassinated.

During the reign of Tsar Alexander II he was one of the most influential men in the empire. He is considered the mastermind of Tsar Alexander II’s Manifesto of April 29, 1881, days before he was assassinated. The Manifesto proclaimed that the absolute power of the Tsar in Russia was unshakable thus putting an end to Loris Melikov’s endeavours to establish a representative body in the empire.

Actually, Pobedonostsev’s ascension in the first days after the assassination of Tsar Alexander II resulted in subsequent resignation of Loris Melikov and other ministers eager for liberal reforms. Pobedonostsev always showed himself to be an uncompromising conservative and never shrank from boldly expressing his staunch opinions. Consequently, in the liberal circles he was always denounced as an obscurantist, pedant, and an enemy of progress.

After the death of Tsar Alexander III, he lost much of his influence over unfortunate Tsar Nicholas II, who was assassinated with his whole family in 1918.

While Tsar Alexander III clung to his father’s Russification policy and even extending it to Finland, he generally disliked the idea of systematic religious persecution, and was not wholly averse to the partial emancipation of the Russian Church from civil control.

During the revolutionary tumult, which followed the disastrous war with Japan, Pobedonostsev, being nearly 80 years of age, retired from public affairs.

He was fictionalized as old senator Ableukhov in the great novel of Andrey Bely called Petersburg (1912). Arguably he was also depicted in Leo Tolstoy’s Anna Karenina as Alexei Alexandrovich Karenin.

Perhaps in revenge, he ordered Leo Tolstoy’s excommunication in

Though Pobedonostsev is mostly known as statesman and thinker, his contribution to Russian civil law is significant. He is generally regarded as one of the most educated Russian jurists of the 19th century. His main work was three volume Course of Civil Law (???? ???????????? ?????) published in 1868, 1871 and 1880 respectively.

In addition, Pobedonostsev published in 1865 in Moskovskie Vedomosti several anonymous articles on the judicial reform of Tsar Alexander II. He criticized the reform because, as he thought, Russia lacked highly qualified judges and in that situation the creation of an independent judicial branch was unreasonable.

Pobedonostsev held the view that human nature is sinful, rejecting the Western ideals of freedom and independence as “dangerous delusions of nihilistic youth.”

In his Reflections of a Russian Statesman (1896), he promoted autocracy and condemned elections, representation and democracy, the jury system, the press, free education, charities, and social reforms.

Of representative government, he wrote, “It is terrible to think of our condition if destiny had sent us the fatal gift - the all Russian Parliament.”

In the early years of the reign of Tsar Alexander II, Pobedonostsev maintained, though keeping aloof from the Slavophiles, that Western institutions were radically bad in themselves and totally inapplicable to Russia since they had no roots in Russian history and culture and did not correspond to the spirit of Russian people. At that period, he contributed several papers to Alexander Herzen’s radical periodical Voices from Russia.

He denounced democracy as “the insupportable dictatorship of vulgar crowd”. Parliamentary methods of administration, trial by jury, freedom of the press, secular education - these were among the principal objects of his aversion. He subjected all of them to a severe analysis in his Reflections of a Russian Statesman. He once stated that Russia should be “frozen in time”, showing his undivided commitment to autocracy.

To these dangerous products of Western rationalism he found a counterpoise in popular vis inertiae, and in the respect of the masses for institutions developed slowly and automatically during the past centuries of national life.

In his view, human society evolves naturally, just like a tree grows. Human mind is not capable to perceive the logic of social development. Any attempt to reform society is a violence and a crime.

Among the practical deductions drawn from these premises is the necessity of preserving the autocratic power, and of fostering among the people the traditional veneration for the ritual of the national Church…

In the sphere of practical politics he exercised considerable influence by inspiring and encouraging the Russification policy of Tsar Alexander III, which found expression in a nationalist propaganda.

Although Pobedonostsev, especially during the later years of his life, was generally detested, there was at least one man who not only shared his views but also sympathized with him personally. It was the novelist Fyodor Dostoevsky. Their correspondence is still read with the utmost interest. “I believe that he is the only man who can save Russia from the revolution”, wrote the Russian novelist…