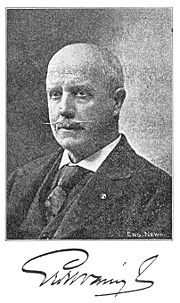 George Edwin Waring was an advocate of homeopathy, and he recommended that all those interested in animal husbandry should interest themselves in homeopathy and equip themselves with remedies and the knowledge of their use.

George Edwin Waring’s Obituary is in The North American journal of homeopathy, Volume 46,

In 1857, Waring was appointed agricultural and drainage engineer for the construction of New York’s Central Park. This effort was considered to be the largest drainage project of its time. Prior to this time, much of the area of the proposed park was a wetland. He designed and supervised construction of the drainage system that created the scenic lakes and ponds of the park.

At the beginning of the American Civil War Waring resigned to accept a military commission as major. He raised six companies of cavalry for the Union side in the State of Missouri. These units were eventually consolidated as the 4th Missouri Cavalry under Waring, who was promoted to the rank of Colonel in January 1862. He commanded this regiment throughout the war, principally in the Southwest.During the 18th century, Newport, Rhode Island’s wealthy merchants developed country agricultural estates in the outlying towns. Following the Civil War, with a romanticizing of rural, country and farm life by Andrew Jackson Downing and others, estate farms for the Newport summer colony became widespread.

Some of these were “model” farms based upon the latest agricultural practice, engineering and technology. Ogden Farm is such a “model” farm, named after Edward Ogden of New York City and Newport (1808–1872), whose summer house was on Narragansett Avenue. After Edward Ogden’s death, the property became known as the Ogden Farm.

In 1867 Colonel Waring settled there to manage the farm. At Ogden Farm, he introduced Jersey cattle into the United States and founded the American Jersey Cattle Club. Waring is known to have laid clay drainage pipe there for field improvement, some of which is still extant. Waring devoted himself to agriculture, cattle breeding and drainage until 1877, when drainage and sanitary engineering became his major preoccupation.

In 1876 William Smith patented a jet siphon water closet, an innovation that caught the attention of Waring, who developed the design for larger pieces of sanitary ware (toilets).

In 1881, William Paul Gerhard, another historically important sanitary engineer became Waring’s chief assistant. Memphis, Tennessee had suffered several severe epidemics of cholera (1873) and yellow fever (1878 and 1879), with over 10,000 fatalities. Sanitary conditions in the city were poor, with many domestic wells close by privies and drained by a fetid bayou.

Many buildings had standing water underneath because of the high water table. Civic leaders recognized the need for better drainage and a sewer system that would keep domestic waste away from the wells, although they were wrong in their belief that yellow fever was spread by inadequate sanitation practices.

The financially strapped city and the state legislature were unable to raise sufficient funds for construction of a conventional (unseparated) sewer system. The situation in Memphis aroused the sympathy of the nation and was largely responsible for the creation of the National Board of Health.

The Board sent Waring to Memphis, who designed what he thought was a system Memphis could afford. Waring’s design called for a separating sewage waste from storm water runoff, an innovation that reduced the size of the pipes required to carry septic sewage. Previously this idea had not been used in the United States on a large scale.

Memphis constructed a separated sewer system according to Waring’s plans, and its era of epidemics came to an end. A detailed description of Watt’s design for the Memphis sewer system and its installation can be found in F.S. Odell, The Sewerage of Memphis with Discussions.

In 1898 Waring was appointed Street Commissioner of the City of New York and began a program of reforms of that department, allowing no political interference.

Based on his reputation as one of the most distinguished Americans in the field of sanitary engineering, at the close of the Spanish-American War in 1898 William McKinley appointed Waring to make a study of the sanitary situation in Cuba. He had previously (1887) designed a sewer system for San Diego, Cuba.

Ironically, he contracted yellow fever there and died shortly after returning to New York on October 29, 1898.