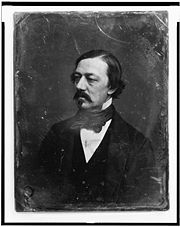 Herbert was a relative of Henry Herbert 4th Earl of Carnarvon, a poet, historian and liguist, he graduated from Oxford in 1825 and travelled to America, where he became a Lecturer in Classics in New York,

Herbert’s book was one of the most influential books of its kind in America, and in 1882, the demand for his books was so great, they were collected together into a Compendium (Mary Treat, Injurious Insects of the Farm and Garden: With a Chapter on Beneficial Insects, (Orange Judd Company, 1903). Page 298. See also Henry William Herbert, Thomas Picton (Ed), Life and writings of Frank Forester (Henry William Herbert), (Orange Judd company, 1882)).

He was educated at Eton College and at Caius College, Cambridge, where he graduated BA in 1830.

To escape his debts, he emigrated to the United States, and from 1831 to 1839 taught Greek in a private school in New York City. In 1833 he started the American Monthly Magazine, which he edited, in conjunction with A D Patterson, till 1835. In 1834 he published his first novel…

Herbert wrote a large number of books, including his most popular Hints to Horse-keepers: A Complete Manual for Horsemen; Embracing … Chapters on Mules and Ponies, and Horses, mules, and ponies, and how to keep them, Under his pseudonym, Frank Forester, Henry William Herbert was a most prodidgious author,