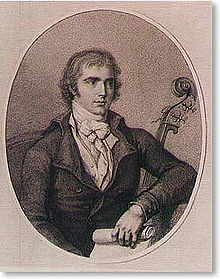 Dragonetti was the godfather of John Barnett,

Dragonetti stayed for thirty years in his hometown of Venice, Italy and worked at the Opera Buffa, at the Chapel of San Marco and at the Grand Opera in Vicenza. By that time he had become notable throughout Europe and had turned down several opportunities, including offers from Tsar Nicholas I.

In 1794, he finally moved to London to play in the orchestra of the King’s Theatre, and settled there for the remainder of his life.

In fifty years, he became a prominent figure in the musical events of the English capital, performing at the concerts of the Philharmonic Society of London as well as in more private events, where he would meet the most influential persons in the country, like Prince Albert and the Duke of Leinster.

He was acquainted with composers Joseph Haydn and Ludwig von Beethoven, whom he visited on several occasions in Vienna, and to whom he showed the possibilities of the double bass as a solo instrument. His ability on the instrument also demonstrated the relevance of writing scores for the double bass in the orchestra separate from that of the cello, which was the common rule at the time. He is also remembered today for the Dragonetti bow, which he evolved throughout his life.