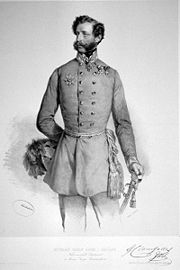 Clam Gallas was cured of cholera by spirits of camphor by Count Laransky in 1831, as Samuel Hahnemann recommended.

Eduard’s mother Josephine Clary 1777 - 1828, virtuoso violin, was a friend of Ludwig von Beethoven, who composed music for her.

He was awarded the Order of Maria Theresa, and promoted to Lieutenant General. In 1849, he became Commander of the Transylvanian army corps, and was successful against Jozef Bem. In 1850, he was given command of the Bohemian Army Corps, which he commanded again in 1859, in the Sardinian war in Italy in the battles of Magenta and Solferino. In these battles, his army corps, positioned on the first left of the battlefield, survived intact. In 1861, he was a member of the House of Lords and in 1865, Lord High Steward of the emperor.

In 1866, during the Austro Prussian War, he suffered a devastating defeat at Jitschin, and was placed before a court martial, but acquitted on the basis of his social position. His spent most of his time on his estates Friedland and Reichenberg in Bohemia.